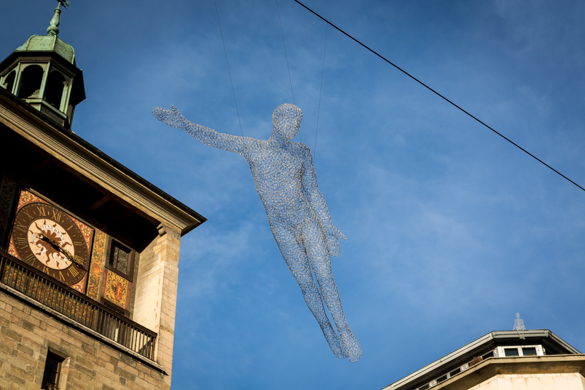 It’s the last days of December. I head off across Geneva to work. I am very late. It is minus 6 degrees. The wintery morning sky is crystal clear. My tram squeaks and rattles its way through Place Bel Air. I wipe the condensation from the window. I notice some guy in the street taking a photograph of something up in the air. I crane my neck to see what has caught his attention. There is a figure made of chicken wire hanging off a cable. I go back to my newspaper. 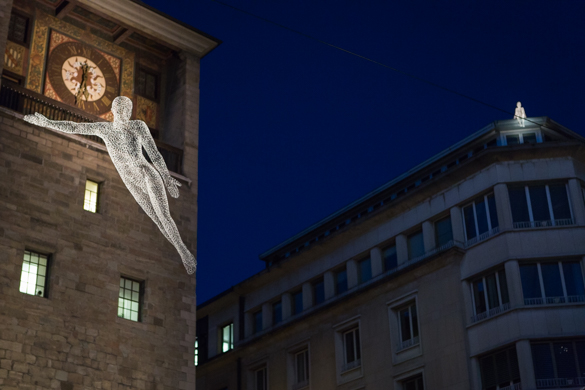 Much too late the same day, I am back on the tram crossing Place Bel Air again but in the opposite direction. A cold dry wind is whistling down the lake. Night has fallen. I look up wondering what has happened to chicken-wire man. I spot him. He has been dramatically and intensely illuminated. I feel as though a fuse has been lit inside me. I see only a beautiful floating-flying figure. I leap out of my seat and tumble out onto the pavement. I am mesmerised. I dig into my bag for a camera. This will be a photographic challenge. I then notice a second glowing figure sitting high on a nearby building. I have an extraordinary and uplifting feeling that, out of the dozens of people hurrying home, I am the only person of interest to these luminous dudes. 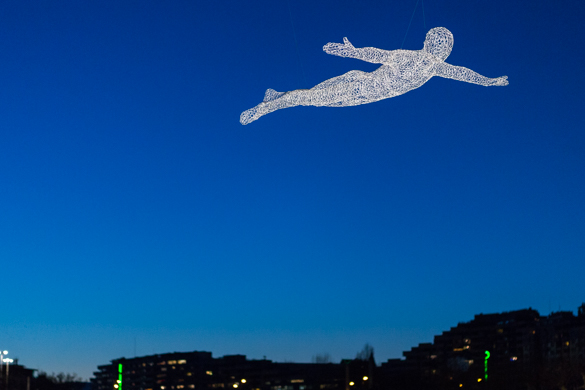 I look around me. There is another flying man high over the river. His poise is elegant. He is in some kind of communication with the first guy. They both seem to be having such fun; maybe comparing notes how best to glide in the freezing air? 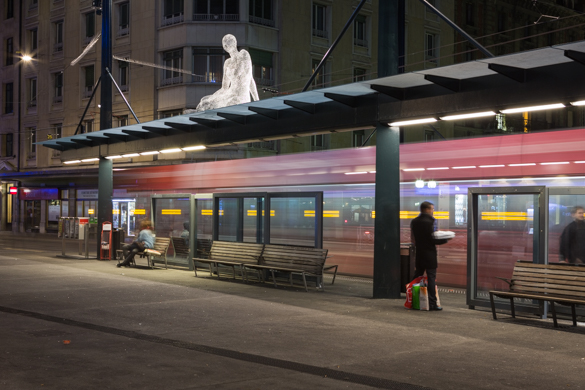 I turn and look at the tram stop. Another watchful figure surveys the scene. She is pensive, static and emanates a lightness of being. There is no doubt that she could, at any moment, simply lift off to swoop and loop with her companions. I’m sure they don’t really take much notice of us. But then I think maybe they are watching over us but in rather a distracted, amused and casual way.

Meet “Les Voyageurs” by Cedric Le Borgne. This is a masterful creation that has indeed travelled to many corners of the world. The figures give the impression that, with the blink of an eye, they could simply flit off into the night never to be seen again. The whole work pulls me into fantasy land; it represents a presence from another world. Rarely has an urban work captured me like this. 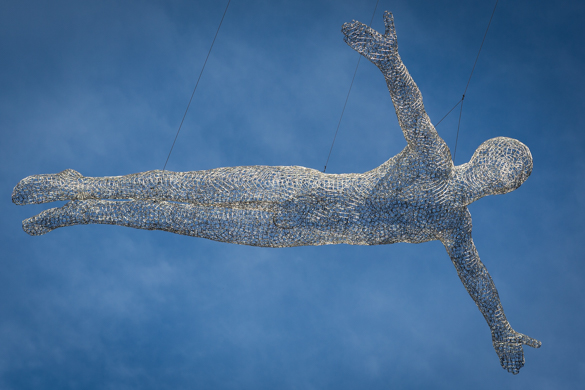 However, at a more objective level and what I admire most about this work is Le Borgne’s technical mastery of what must be an incredibly difficult medium to work with. How does one bend and mould chicken-wire to create figures that are not only anatomically correct but also adopt a credible and pleasing human posture for a non-human activity (i.e., flying)? Visually, they work. This is why they do a little transport job on my spirits and my sense of reality. If you are late night shopping in the next couple of weeks, take stroll down to Bel Air. Let your spirits be transformed!

“Les Voyageurs” is a part of Geneva’s first Lux Festival. Other installations can be seen in Place Longemalle and on Ile Rousseau. I look forward to the second Lux festival.