Lockdown Beautiful Stuff! Have you done a painting, taken a photo or made any other beautiful stuff as a result of having to self-isolate at home? Please send us a photo and two lines of text indicating the why of it and what it means to you. We guarantee to publish it on Talking Beautiful Stuff in the weeks to come. Thank you! 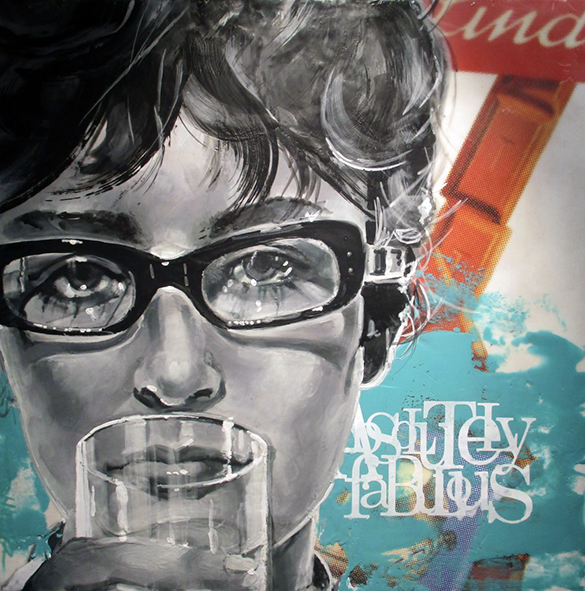 Geneva’s queen of pop, Isabelle Dunkel has enticed Jeff Schaller back to Switzerland for his seventh exhibition here. I arrive at Galerie ID as the doors open. I first spy a beautifully executed pop image comprising nods to Swiss chocolate, a black and white film that I should know the name of and a hugely successful British TV comedy series. I stroll around. This show is classy, cool and consistent. Each work is immaculately framed and hung. But the maestro is yet to arrive; the normally unflappable Ms Dunkel shows a flicker of anxiety. 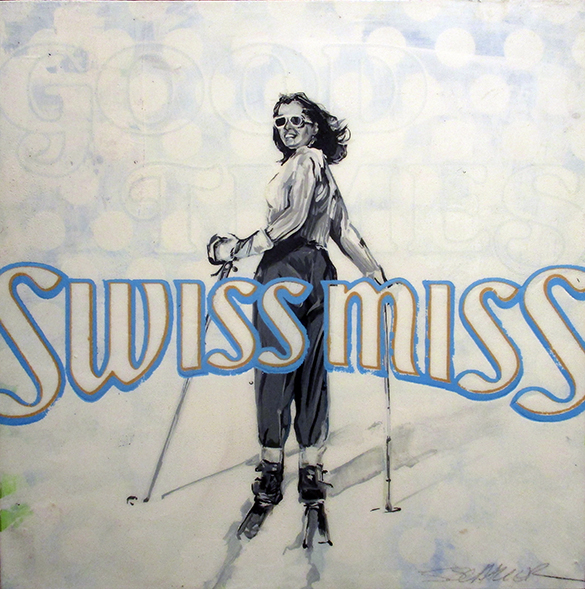 The Schaller family roll in a few minutes after fashion o’clock. Jeff and Désirée greet me warmly. Their three young’uns are immaculately turned out for the occasion and immaculately polite.

Jeff explains his European translation of the themes he would normally pick out with his trademark encaustic (hot beeswax paint) technique. He still “takes something and adds to it.” To images of beautiful women (this time, Brigitte Bardot,) his dots and screen prints he now adds skis, snow, Fellini movies, Absolutely Fabulous and… well… Switzerland in general. I find this refreshing (and deliciously un-Swiss!) given that “Pop Art” has been so firmly drenched in JFK, Marilyn, Stars and Stripes, Harley Davison, Coca-cola etc. This transatlantic sleight of hand still recalls the pop era but the fact that it is here in Geneva now means Jeff’s work has deftly shifted from retro to contemporary and so, most probably, is in a class of its own. I love it. 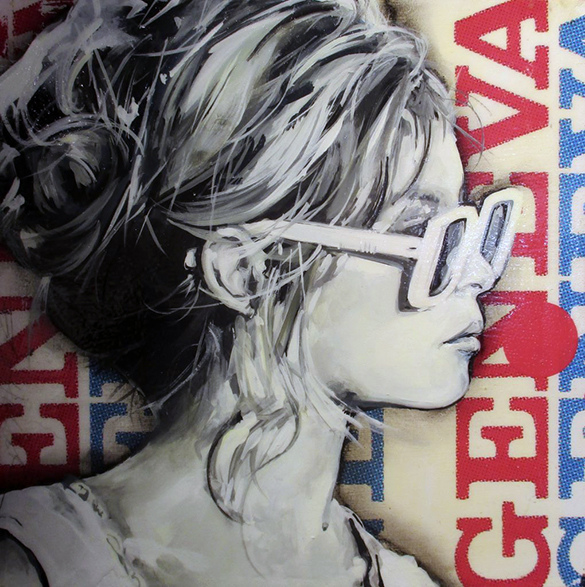 There is also a technical transition. Bringing the exhibition from the USA has demanded some smaller pictures to which encaustic is less suited. This has pushed Jeff to experiment with heated acrylic. The results are no less accomplished. 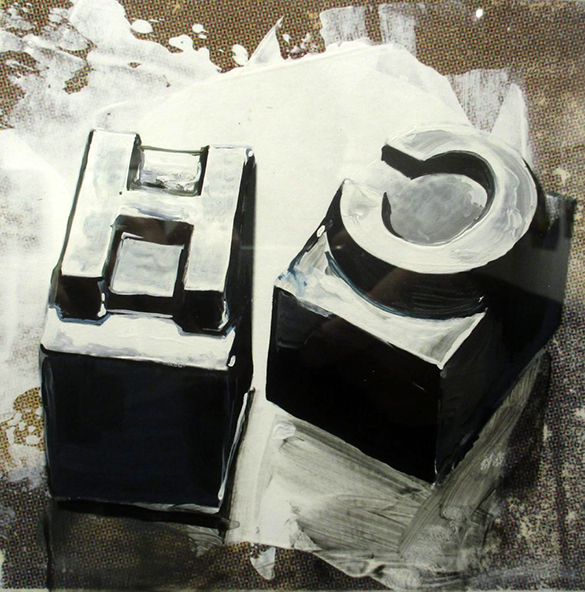 The picture that catches my eye, causes a double-take and draws a smile is “Helvetica.CH.” This is a delightful tongue-in-cheek take on one of the world’s most commonly used typefaces, Helvetica, developed in Switzerland (of course.)

The exhibition is very satisfying; it just comes together nicely. It is unique in that it represents American “pop art” at its approachable best but nourished by Europe. The exhibition runs until the end of May. No excuses!

Thanks to Galerie ID, I know the work of James Rizzi and Michael Kalish. Once again, ID brings a major name in American pop art to Geneva. This is Jeff Schaller‘s sixth ID exhibition and, what’s more, these are his only six exhibitions outside the USA. I have the privilege of a rendez-vous with him just before the opening. In the gallery window is “Roses;” it catches my eye from afar. I meet Jeff. Broad smile. Nice guy. I can’t help noticing the shiny aligator-skin boots. Well, he is American! 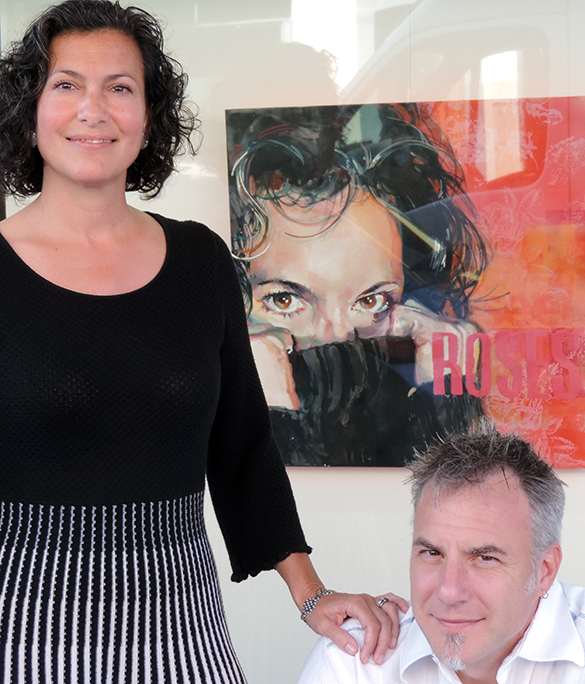 Jeff introduces me to Désirée, his muse-spouse and mother of their three children. Nice eyes. Nice lady. The pieces fit together. Désirée is the model for “Roses.”

Jeff is 44 years old. He trained in London and Philadelphia. His initial interest was scientific illustration. It did not take him long to turn his talent to producing images of beautiful women. “I love the hair and the soft skin.” he tells me openly. 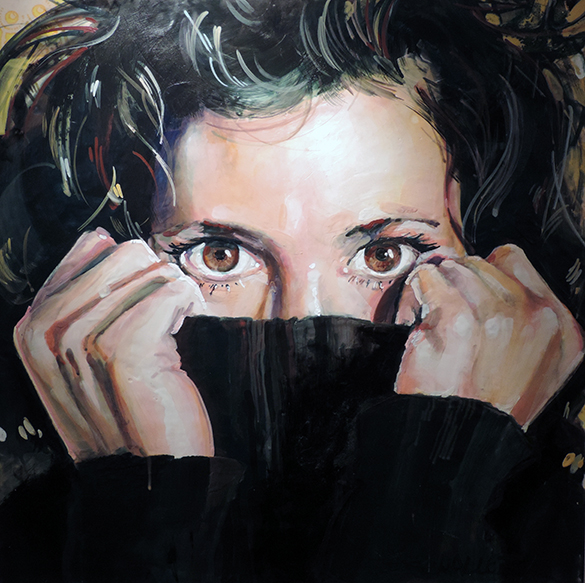 It comes as no surprise when Jeff tells me – with justifiable pride – that Désirée is the model for most of his work. However, the success of his portfolio is not solely due to the beatiful and evocative subject matter. His name is known for his mastery of “encaustic.”  This is a two-thousand year-old technique that works best on wood. It involves the painter making his or her own paint by melting beeswax and adding the pigments. Application is time-critical. The first shot has to be the right shot.There is a fifteen second window of opportunity before the paint dries. In describing the warming of the beeswax, Jeff warms to the subject. It is clearly a technique that matches his temperament. After careful planning and preparation he launches himself into total, intense concentration and commitment. Désirée and the kids know this is not the time to ask him to take a telephone call. Jeff uses words like “viscosity,” “instantaneous” and “confidence.” He tells me the best part of his work and what really gives him a buzz is the moment that he knows he has executed the final lavish stroke. As if to re-run the thrill, he touches his work and invites me to do the same. I already know him well enough to call him “Mister Enthusiasm!” I ask him what one word describes his chosen technique. He thinks for bit and says “Yummy!” and laughs. The result cannot be appreciated on a photo…. so go to the exhibition! 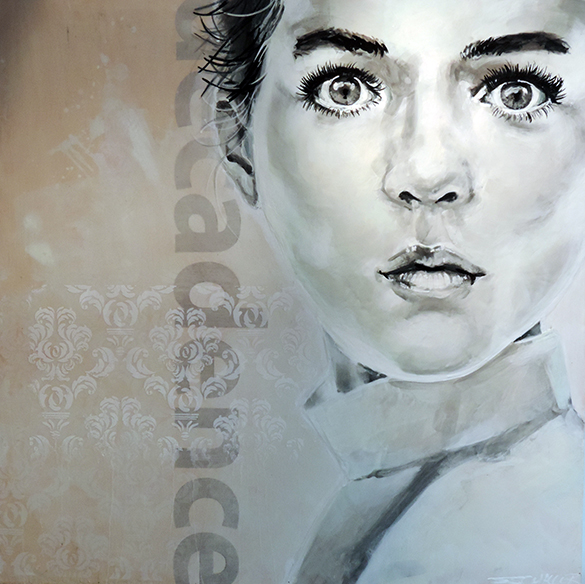 I am drawn into Jeff’s paintings. Each is like one frame of a sumptuous cartoon strip. Each is a puzzle of nostalgia, celebration, sensuality, relationship and the written word. But the puzzle just is. It doesn’t need to be solved. I ask Jeff about his influences. Roy Lichtenstein? Ed Ruscha? Top of his list is Jasper Johns. A major reason is that Johns also used encaustic to great effect; another is that he is reputed to have said “Take something and add to it.” I guess it sums up pop art. 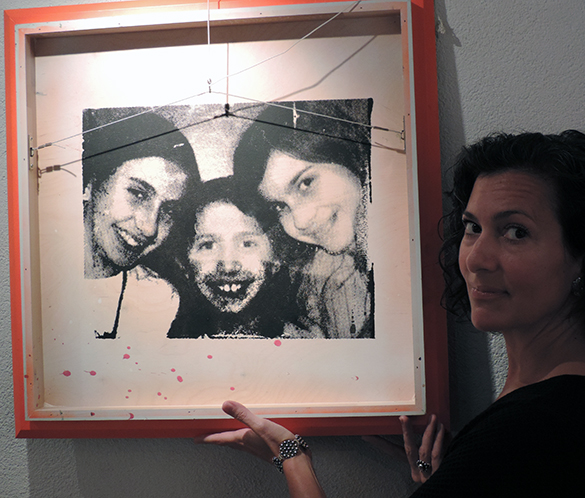 Authentication and dating by silkscreen print on reverse side of “Wise”

There is another unique feature to Jeff’s works. None are signed. None are dated. Désirée turns one of the paintings. On the back is a hand printed silk-screen of a recent photo of their three children. Each work is thus authenticated and dated. 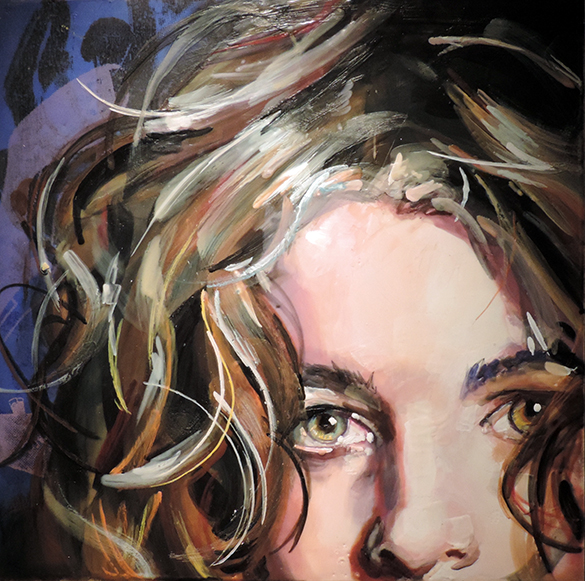 One painting reminds of the love of my life. I inspect it closely. I am slightly breathless. I explore the hair and the eys with trembling finger tips and… I buy it!

We chat. People arrive. Jeff clearly feels he should mingle. I have a thousand questions. I permit myself one more. “So what do you do when you’re not painting?”  There is a heart beat of hesitation in his smile. “I’m a bit of red-neck!” he replies noting my surprise. “I bow-hunt.” I ask what he hunts. His eyes flick down to his boots. “Aligators!” he says.