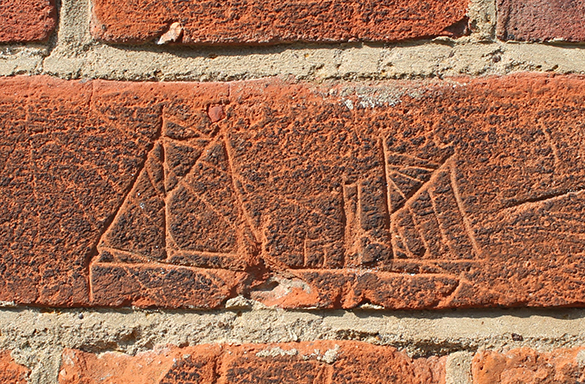 I imagine Overstrand in England’s late 19th century. It is winter. The grey North Sea can be heard crashing its rollers on the beach below the cliffs. The cry of gulls on the gale add but more wildness to the day. In the cottages here on the remote coast of North Norfolk, candlelight illuminates the dish of herring that form the evening meal of the population. This is a horsedrawn world, quiet, non-electric, non-digital, with time to think and ponder your life. Your heroes are the sailors who bring home these silver fishes for your dishes, the seamen, your relatives and friends, who brave the storms in their sailing boats – and latterly powered by steam engines – in order to harvest the great North Sea of its bounty. Death is always near; if not from drowning, he visits with disease and injury in a time long before our National Health Service. Such a different life from ours today! 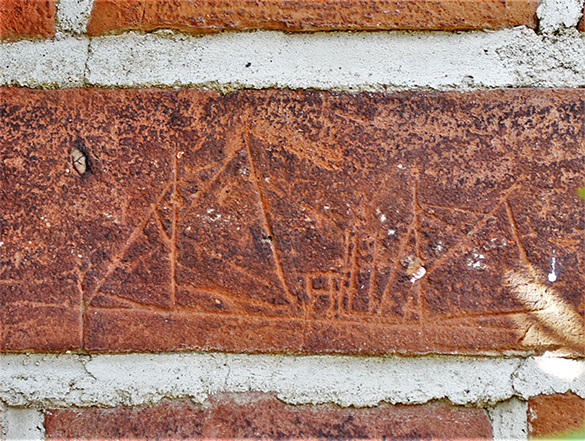 My imaginings were prompted by what I had just discovered on a hot, Summer’s afternoon whilst walking past an old cottage atop Overstrand’s cliffs. My eye had caught the exquisite rendering of herring boats – “drifters” – carved into the brickwork of the cottage wall. Each boat sails upon a sea of cement below the brick. The gaff-rigged sails, steam chimney and upward angled prow of the vessel speak of a deep knowledge of the subject. 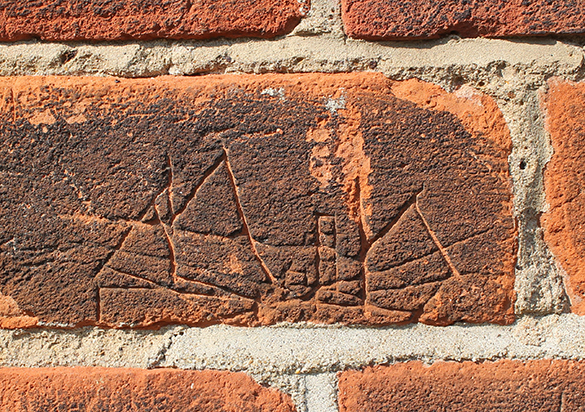 I feel a connection to a person now dead who took the time to scratch these important images of their life into the bricks. What was the purpose? Was it simply a love of the boats? Was it hero worship or some deeper, spiritual ceremony to bring luck or success in the hunt for the elusive shoals? All I have to work with is this evidence on the cottage wall. The rest is conjecture but nevertheless, I am in a culture now past. I gulp and a tear rolls. I am deeply moved. 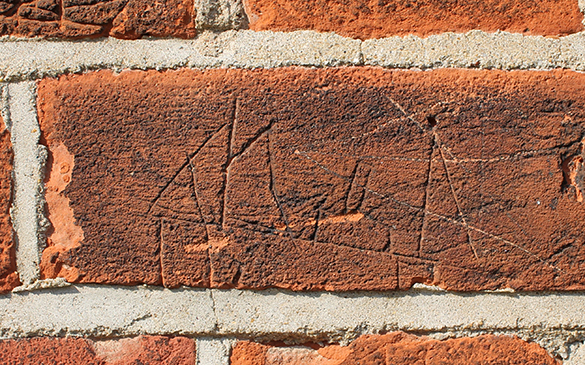 Here’s to you! Fishing here was your life; all consuming, necessary and endless. You were born, you fished and you died. Occasionally you would carve another boat on that cottage wall. Did you do it for me? Were you seeking some form of immortality? Whatever your reasons – thank you. 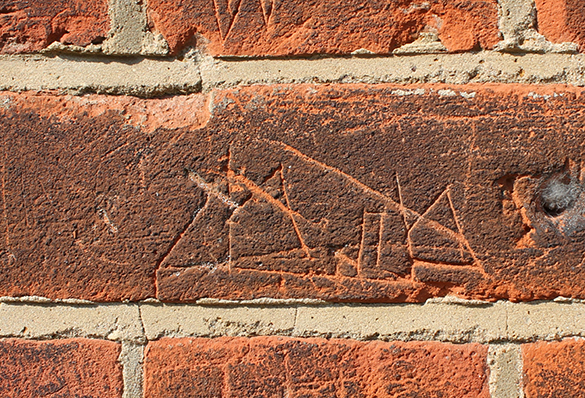 I have little left of my day in London. I hurry past the Black Friar pub and find the north end the pedestrian-only Millennium bridge. It is busy. Like everyone else, I am determined to get to the Tate Modern that beckons from the south side of the river. I want to see The Clock. 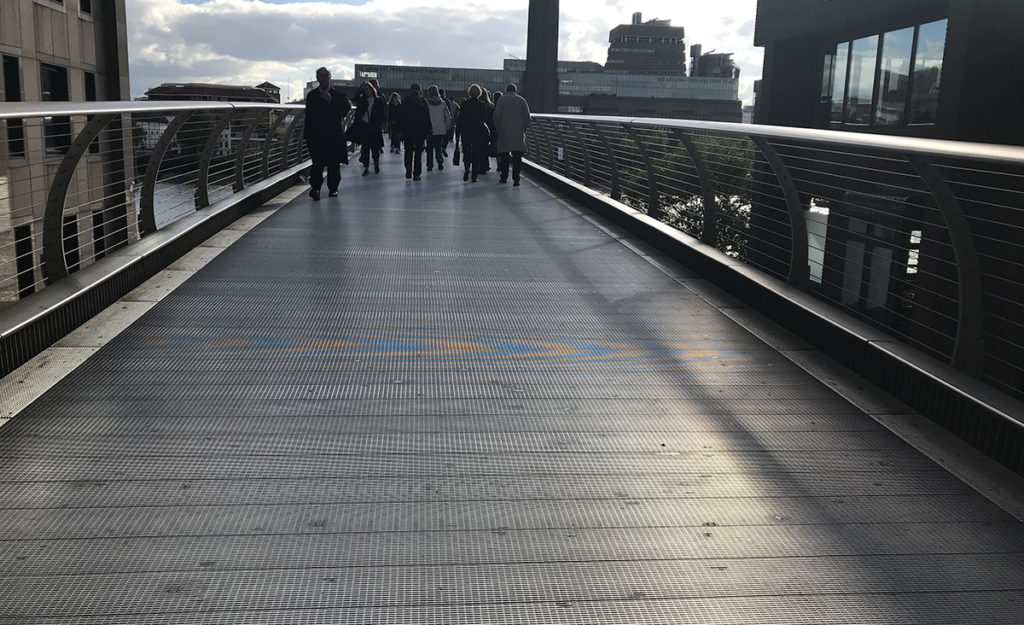 In the middle of the bridge there’s guy lying down next to an open tool box. His clothes are daubed with paint of every colour. I say hello. He’s very friendly. I ask his name. “Ben Wilson.” He replies with a broad smile. “But people call me ‘chewing gum man’!” 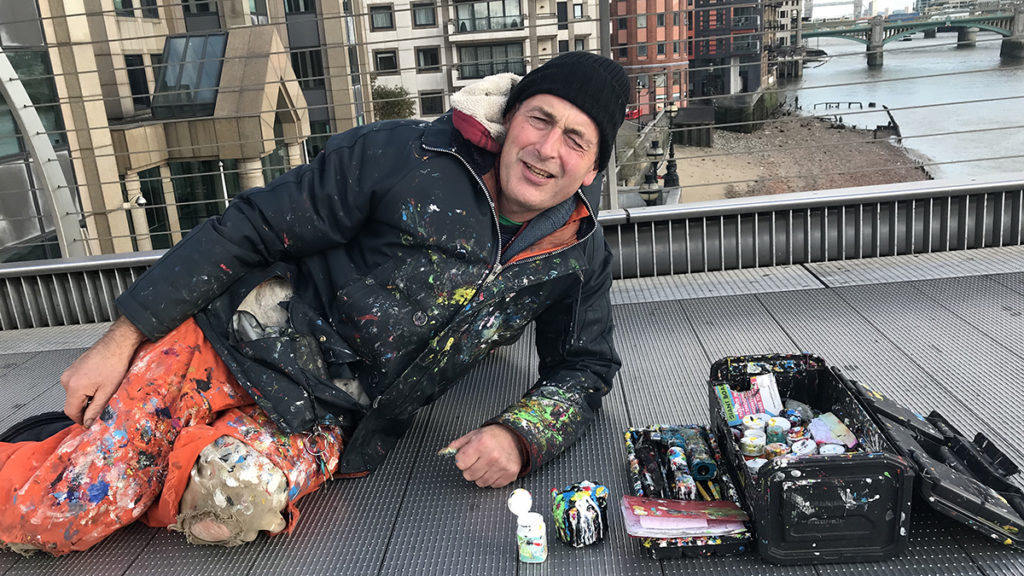 Ben is relaxed and chats to anyone who stops. He’s not obviously chewing gum. I ask him what he’s doing. It’s clear he’s been asked this a thousand times. “I’m painting the chewing gum!” I gawp. I look down around my feet and along the shiny aluminium walking surface. I see there are thousands of stuck-hard pieces of discarded chewing. The penny drops. Ben’s canvas is the chewing gum! “It’s a great day for painting.” he says. “It rained last night so the gum’s clean!” 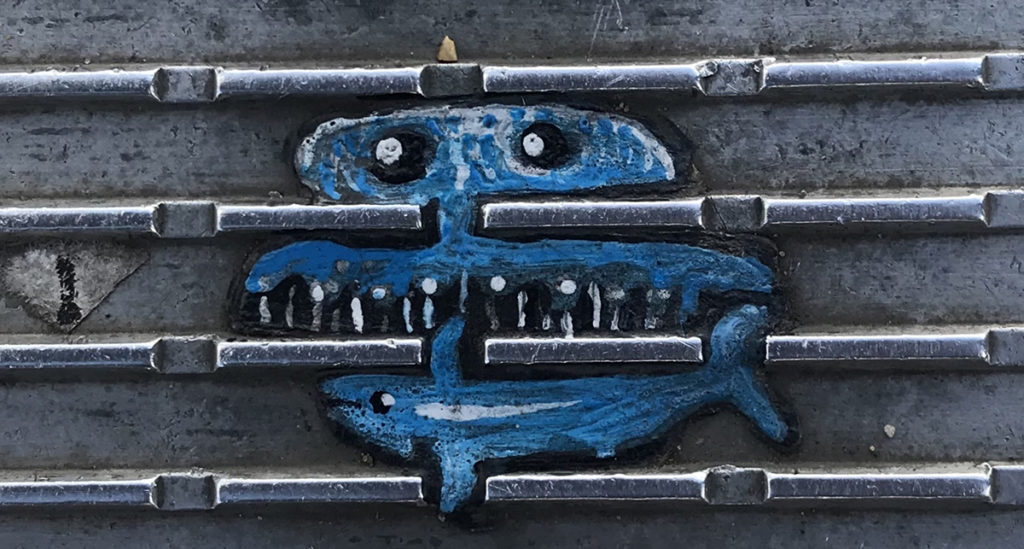 Using acrylic and enamel paints he has created hundreds of beautiful little fantasy designs scattered along the full span of the bridge. They include humanoid, animaloid and all sorts of -oids. Each is unique and intriguing. Some bear the names of visitors. I crouch to take photos. People trip over me; Tate-goers are too polite to curse me. Ben cheers me on. 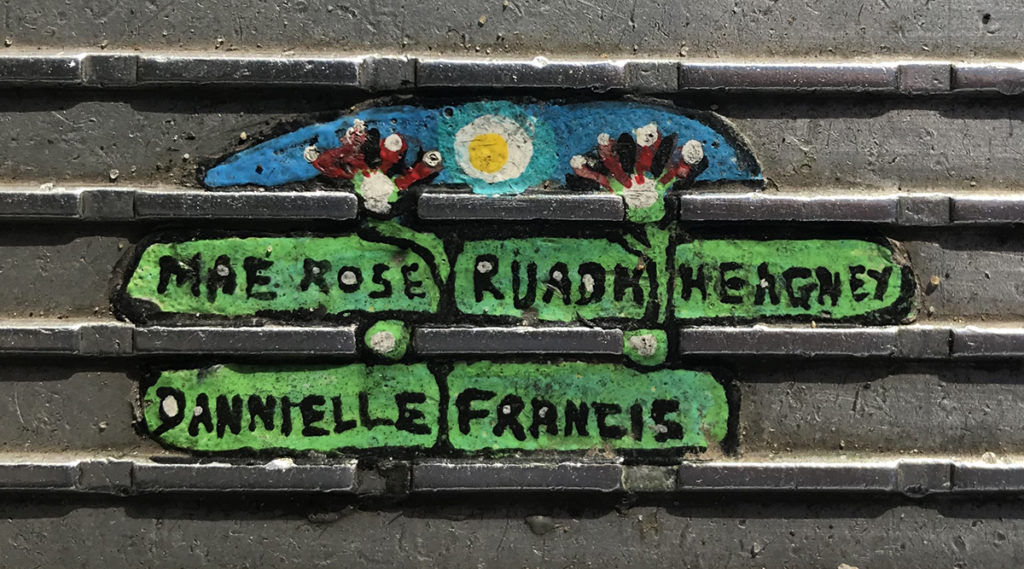 Ben is an exhibited painter and sculptor. This work, for which he is apparently well-known in London, was inspired by his distaste for any kind of rubbish on the streets. It is a truly imaginative initiative. However, he has generated controversy. Is this vandalism? He was once dragged down to the local police station for painting public property. Clever lawyers argued that he is not defacing private property but merely painting rubbish and therefore is breaking no law. 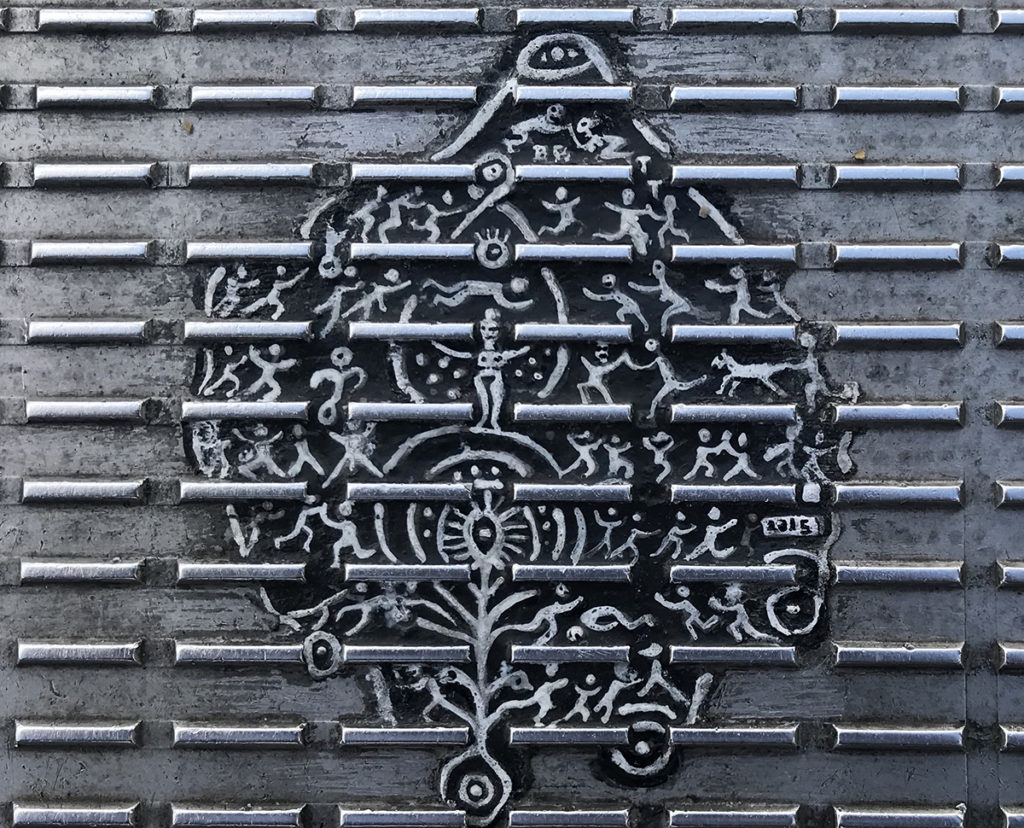 Ben’s project requires an extraordinary dedication. It is as original and unexpected as it is opportunistic. I am totally uplifted. This has made my day. I skip down the steps to the Tate Modern where, I’m sure, the surface of the bridge will one day be exhibited.

Take a look at more of Bens work.

Christian Marclay’s The Clock, currently showing at the Tate Modern, is the only “work of art” that I could happily look at all day and night. It is a masterful concept, staggering in terms of the work involved and mesmerising. If you’re thinking of going, do not make an excuse. You have until 20th January 2019.

The Clock is a twenty-four hour video montage. Each of the 1,440 minutes is represented by a scene from film or television that features a clock, a watch or some other time-piece. Occasionally the time is spoken. “Oh, my God, it’s three o’clock!” Therefore, the work itself, when synchronised with real-time, functions as a clock with the time shown on-screen being the actual time. Brilliant! Just imagine searching for all those scenes! The only thing I’ve seen like it is Maarten Baas’s clock in Schiphol airport.

I walk in at 14:40. I am shown to a comfy armchair as Sean Connery glances knowingly at a wall clock that stands at twenty to three and through which he rightly figures he is being spied upon via a peep hole. He coolly hangs his jacket over the clock. Cut to the next scene as a grainy, black and white Harry Lloyd dangles helplessly from the big hand of a massive clock above a crowded New York street. It is nineteen minutes to three. Get the picture? Furthermore, all the clips are cleverly spliced and a musical sound track makes the scenes run together smoothly to the point that it is not always obvious when there is a change to a completely different film. I am enthralled.

I wish I had more time. On-line, I find that if I was fortunate enough to be able to watch The Clock in it’s entirety, I would notice the fast pace of the time-orientated action in the morning, the inevitable bell-ringing around High Noon and the ensuing scenes with a more relaxed tempo. The late afternoon sees commuters travelling by car, bus and train. Scenes from the early evening show people eating; later, they are drinking in bars. And then, of course, there’s the inevitable deadline: midnight. In the early hours of the morning, sleepers and dreamers become angry at being woken at an antisocial hour. Big Ben features regularly.

The Clock was completed in 2010 after more than three year’s work. There are only six copies in existence. Happily, the Tate Modern has got hold of one for our benefit and has dedicated a big enough space for a hundred people to lounge and immerse themselves in this chronometric history of cinema. There are even all night showings. 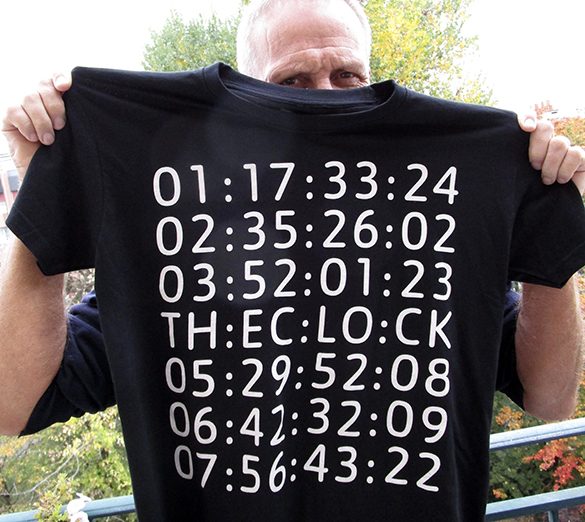 There is no single image that adequately represents this work; but I bought the t-shirt anyway. The time-codes represent the monumental task of researching and editing The Clock. They do not represent the genius. One day, I’ll watch the whole thing. Bravo, Christian Marclay!