“A lockdown day’s sunset through my window. It rained all day long, then there was a cross in the sky…”

Lockdown Beautiful Stuff! Have you done a painting, taken a photo or made any other beautiful stuff as a result of having to self-isolate at home? Please send us a photo and two lines of text indicating the why of it and what it means to you. We guarantee to publish it on Talking Beautiful Stuff in the weeks to come. Thank you! 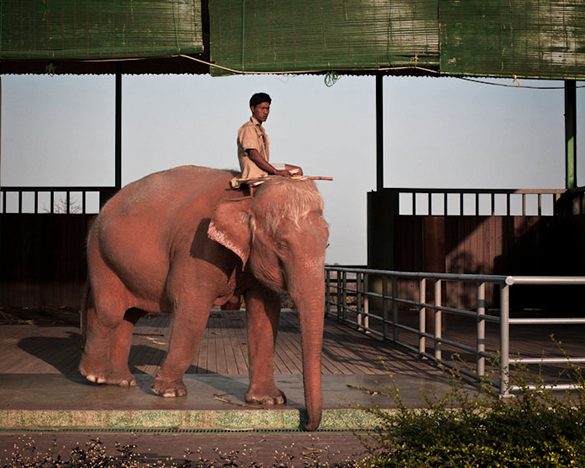 One of the white elephants belonging to General Than Shwe. In South-East Asia, white elephants are symbols of power, good luck and political credibility. In reality, they are albino animals with pink-brown skin and pale eyes. The official line, though, is that they are white.

Two years ago, I met Robert at his home and wrote about his mesmerising Asian photography. Last year, at his Holy Creatures exhibition I had the privilege of buying one of his beautiful, atmospheric, hand-developed, black and white prints. Robert is a thoughtful, experienced and creative photographer. His work is always worth seeing.  However, I am a little surprised by the title of his new exhibition. I cannot escape a tiny fear that his fascination for the Far East has led him to exhibit a series of golden temples, water buffalos, happy saffron-clad Buddhists monks and grinning children. This fear, it turns out, is unfounded. The golden land with smiling people doesn’t exist except in photos that Robert doesn’t want to exhibit. 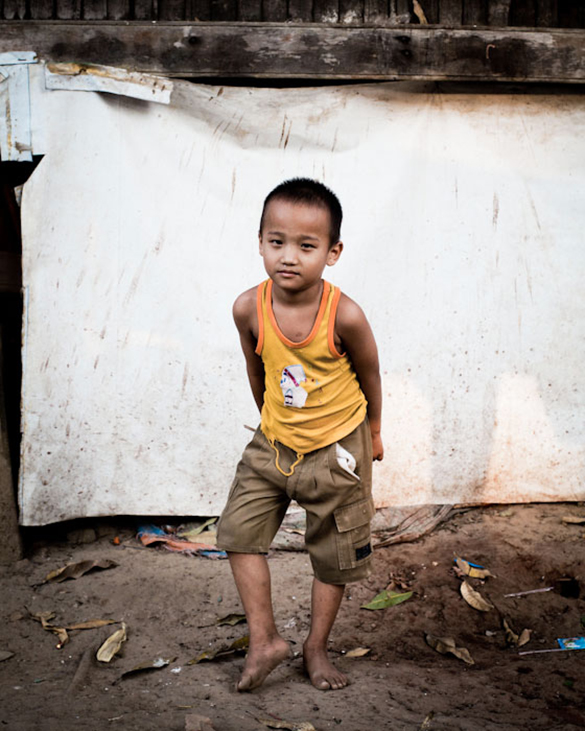 Kaung Kaung lives in the Le Te Mu monastery. His parents live in Rangoon but don’t have the means to look after him.

Robert’s travels first took him to Burma in 1983. He has returned twelve times. In his medium format, black and white style he really did photograph a golden land with smiling people. He then realised that such images were precisely what the political authorities wanted visitors to take away. “I took many nice photos” he tells me. “But they were too nice! They were not representative. They were not genuine. I wanted to show the crumbling vestiges of British colonialism and the poverty of everyday life.” Determined never to exhibit these photos and equally determined to capture the political realities of Burma, he returned in 2011 and 2012 with this current exhibition in mind. 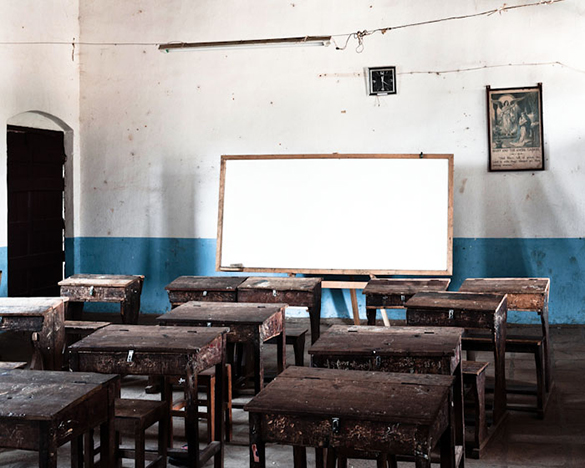 Classroom in a christian institution, Kalaw, 2012. Education is, in principle, free in Burma but the teachers are so badly paid that they have to give private lessons as well. The many private schools are only for the privileged. Religious institutions attempt a basic education for children of the most needy families but many such children have to work in tea shops for less than a dollar a day. The education budget is 6% of the total national budget. The army expenditure is 13%: for a country with no enemies outside its borders.

The photos on display in the new exhibition show a surprising change of approach and technique. He has moved not only from medium format film to 35mm SLR digital in colour but also from the aesthetic and evocative to photo-journalism. 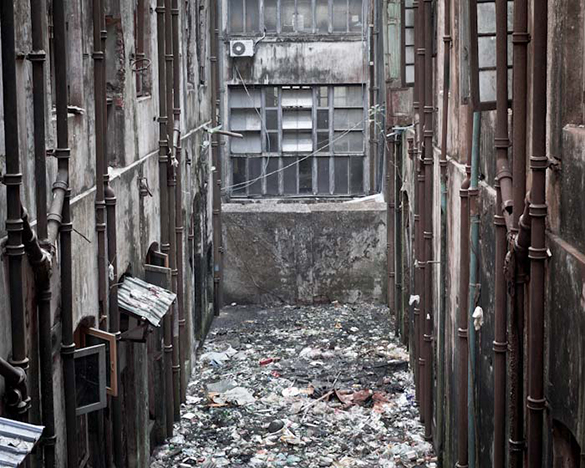 The inner courtyard of Sofaer & Co in Rangoon, 2011. This building dates back to 1906 and housed the interests of Issaac Sofaer, a prominent businessman. After the military take-over of power and expulsion of the owners, it became the office of taxation until the government moved to the new capital Nay Pyi Daw in 2005. Colonial buildings are the property of the government but are left to decay. There is an on-going programme to sell such colonial buildings to foreign companies with a view to creating more desperately needed hotels for tourists.

I’m a great admirer of Robert’s work. Whether illustrating folklore or in pursuit of a political statement, each photo carries a distinct, understated quality. 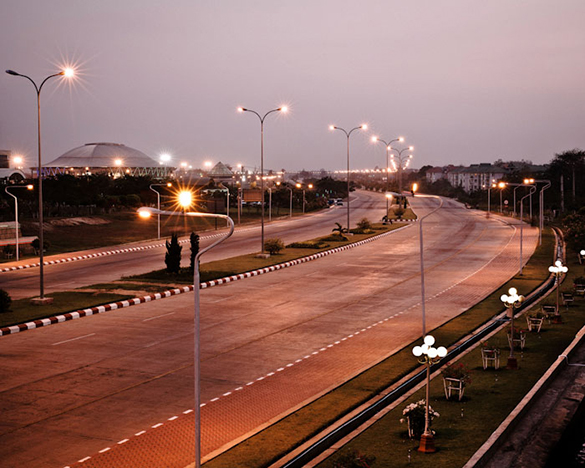 Eight-lane highway in Nay Pyi Daw, 2012. The new capital was hastily constructed in the early 2000s in an arid area through fear of an American invasion. The roads are illuminated all night when the rest of the country receives electricity for only eight hours per day.

You can meet this gentle-mannered and versatile photographer at the opening of the exhibition at Espace Cyril Kobler on Tuesday, March 3 from 1800. I’ll be there too! 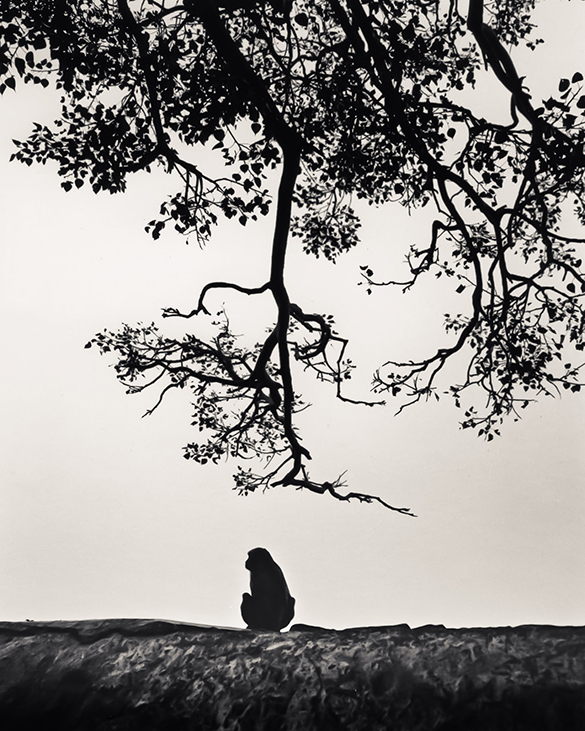 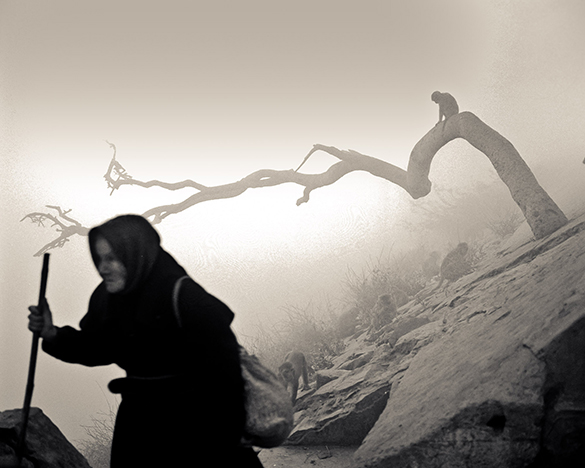 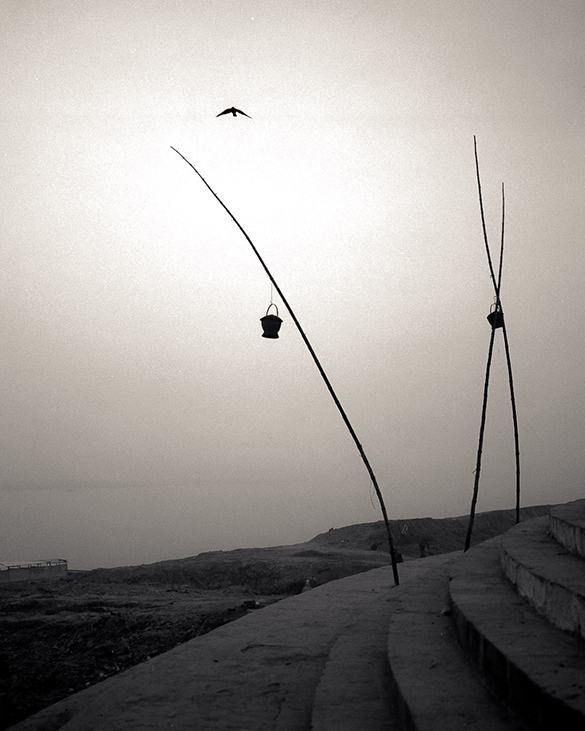 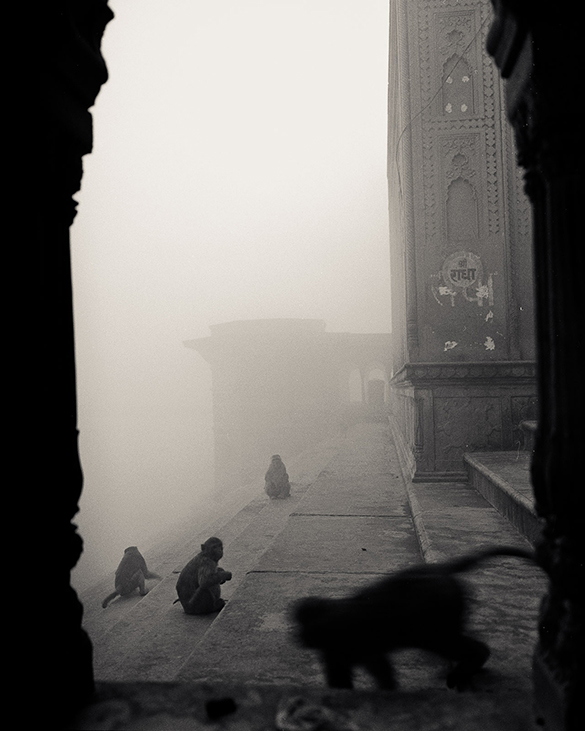