This is a guest post by Boffy Burgoon, Art Correspondent for the Bulletin of Particle Physics.

I’m on the road to Durness, Northern Scotland. Single-lane with passing places. It winds its way through some of the most majestic landscapes that Great Britain has to offer. The many motoring enthusiasts, caravanners, campervanners, hikers, bikers and cyclists who toil their way along this part of the North Coast 500 are rewarded with magnificent views of long-ago-glacier-smoothed hills, hanging valleys, gushing peat-stained rivers, lochs of an unfathomable gun-metal hue, red deer and even eagles. This is country that fills my soul.

If you decide to brave the euro-touro logjam of the NC500 you may wish for a distraction albeit a distraction that is altogether startling in such an environment. Turn off the Durness Road (the A 838) at Rhichonich onto the B 801 towards Kinlochbervie. After about three kilometres, you will be confronted by Rusty McCrushem’s latest car mash installation. It is his most challenging to date. Unlike his earlier piles of rusted and discarded automobiles scattered over Scotland, this has a brilliantly thought through temporal element and takes car mashing to new heights.

At first pass, I see only cars that are more or less in tact. Rusty teases us with the odd patch of rust, flaking paint, delicately shattered windscreens, a dented door here and a missing wheel there. These once shining objects of commerce and pride are of no further vehicular use; they are now abandoned. However, they seem somehow at ease in their weed-ridden, road-side rest home for cars. Rusty broadcasts a message for the as yet unimpressed viewer: “Och, you’ve nae seen anything yet!”

And then I notice the forces of destruction that Rusty commands. This gives the whole a kind of lambs-to-slaughter feel. Is this a sly McCrushem nod to the one-way street of universal decay?

Rusty’s innate talent for mashing cars pummels the senses. The results are spectacular. I feel I have come across a scene of extraordinary violence but the screams of twisted automotive pain are stilled now. Only the curlew calls.

It’s difficult to imagine how this obliteration was achieved. I stand jaw-dropped in fascination. It is at once shocking and thrilling. The juxtaposition of highland scenery and motorway pile-up is difficult to accommodate. Russian dissidents come to mind. A thoughtful and thought provoking addition is a rusting cement mixer. Is this another of Rusty’s wink to the laws of physics? The great mix? Eternal spinning of countless galactic particles?

Whatever one thinks of Rusty’s work, his genius for mashing large metal objects is awe-inspiring. I imagine him manipulating some great mechanical maw that chews up whole cars and spits them out on the roadside. He is shouting “This is art! This is art!” Is it?  Well, how else can he justify what he’s doing? Whatever, with this particular roadside wreckage, he has assured the enduring enigma of his oeuvre.

Of an evening, as the northern sun settles, I am sure Rusty feels satisfied with his day’s work. I see his smug smile as he pours himself two fingers of his favourite tipple. Surely, the same two fingers that he waves at anyone – resident, tourist or environmentalist – bold enough to comment. Whatever emotions provoked by Rusty’s work, this whole gig just makes me angry. So there!

I am reunited with a long-lost Hebridean cousin. She suggests that, despite the weather, we visit some nearby standing stones. On the road to Callanish, the suggestion becomes less appealing as the wind speed rises, the temperature drops and the rain becomes horizontal. We pass bus shelters huddle-full of drenched and exhausted cyclists. At the well-organised visitor centre, the cafe is hung about with cagools and anoraks all dripping on the floor; their owners dawdle in the very informative exhibition wondering whether to brave what has to be the worst of Scottish weather. Cousin Rona can’t see what the fuss is about. During a brief pause in the downpour, she grabs my arm and force-wades me up the path to a series of crudely – if at all – hewn monoliths. It is bleak all around. We lean into the wind trying to orientate ourselves. Photography is near-impossible. But then no photograph conveys the massive, raw, resilient beauty of this 5,000 year-old collection of standing stones. Something here nudges my soul. I am surprisingly moved. Did our ancestors pass here? What did they do when the weather was like this? Then I think of the making of this place. These pillars of Lewisian gneiss weigh up to 50 tonnes. Did stone-age (wo)man split the stones and, if so, by what method? How were they brought here, positioned and placed upright? How long did it take? What role did the immense task and its outcome play in neolithic life?

The whole consists of a centre stone within a circle with lines of other stones radiating out to the south, east and west. There is a longer “avenue” or double line of stones to the north. There is also an exposed chamber just east of the central stone; it is thought this might have been built later for ritual or habitation or both.

This particular collection of standing stones is just one of eight in the Callanish area. It is one of the oldest of more than one hundred such sites found across Scotland. What is so intriguing is that these not-so-primitive people must have had a very important reason to expend so much time and energy in the construction of these sites. Information on display at Callanish and on-line makes evident that nobody has a clear idea about what was in these people’s minds. It seems likely that there is a religious importance and these were places of ritual. It is claimed that different sites have similar alignments with the paths of the sun and moon. Were these earliest Hebrideans trying to make sense of how the movements of the sun and the moon change throughout the year so cementing in their culture notions of night versus day, dark versus light, cold versus warm and winter versus summer? Or is it as simple as respect for the dead? Life then would not have been as super-sanitised as our’s today; we have virtually no contact with dead bodies and recoil when we do. Were these sites some kind of welcoming gateway to an imagined after-life where the dead would begin their onward journey? I can’t help feeling that the importance of answering these question goes beyond the academic. One thing is clear: the question of “why” comes down to humans’ universal capacity to believe in something abstract and the power of such belief when held in common with others. These magnificent standing stones therefore must represent an essential element of humanity.

Later, by a warm peat fire with a cup of tea, I find a picture on-line that tells me that blue skies do happen here. My desire to return, however, is not fired by hope of fine weather; something calls me from way back in time. 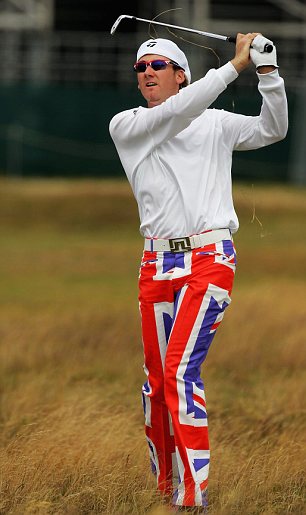 “We shall not be asking Ian to change his trousers.” – Peter Dawson, Chief Executive, Royal and Ancient Golf Club of St Andrews.

Talking Beautiful Stuff is about the people, ideas and means behind anything creative. The quaint story of Old Tom’s Old Course at St Andrews, Scotland is a narrative that proved popular with golfers and non-golfers alike. We might be stretching it just a bit in expecting our readers to be interested in a man’s trousers even when sported by of one of the world’s more talented and flamboyant golfers. But, believe it or not, Ian Poulter’s trousers are the stuff of a feel-good design story. Where does that story come together? You guessed… St Andrews, the home of golf.

This year The Open, one of the oldest competitions in sport, is on the Old Course at St Andrews. The golfing elite will compete for one of the oldest trophies in sport: the famous Claret Jug. “The Golf Champion Trophy” was designed and crafted by Mackay Cunningham and Co. in 1872 for the grand sum of £30. It now has a permanent home in the club house of the sport’s governing body, the Royal and Ancient Golf Club. No stapleford points for guessing whose troos featured the Claret Jug when the Open was held in St Andrew’s in 2005! 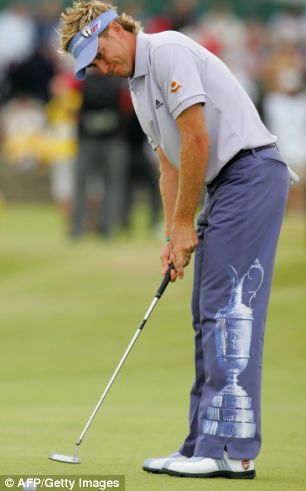 On the first day of the Open at Royal Birkdale in 2004, Poulter strutted onto the first tee wearing his extraordinary Union Flag trousers. Jaws of the tweed-clad dropped to the sound of a hundred cameras clicking. The R&A saw no breech of either rules or professional dress code. At the time, Poulter claimed “I honestly didn’t do it to get noticed. I did it because I thought it would be really cool…. The attention was nuts, wasn’t it? You’re not expecting to hit every paper around the world because of a pair of trousers.” He went on to say – as a warning to any club golfer tempted to make a dressy statement for the monthly medal – “But I had to back it up, because if I’d played like a total idiot, I would have been absolutely slaughtered by everyone.” The episode sowed the seeds of an idea.

A competition to design his trousers for the 2005 Open drew 2000 entries. The winning pair, designed by Gavin Adams, featured the Claret Jug on the left leg and the names of past winners on the right leg. Poulter, tongue-in-cheek, said “I wanted to do something a bit more subtle than last year!” Along with a replica of the Claret Jug, these trousers now feature in the British Museum of Golf ….. at St Andrews.

Update your look with outfits worn by Mr Poulter himself. See what he is wearing here http://t.co/I7QUqQ4wl1 pic.twitter.com/s8OjKFfx9T

Poulter’s public persona portrays a lion-hearted, all-round good bloke with drive, attention to detail and attitude by the truckload. In his own words he’s “got more front than Brighton beach.” His recently published and totally readable autobiography “No limits” gives a fascinating insight into the persona, the life of a determined professional golfer, the road from Ford Fiesta to fleet of Ferraris, his Ryder Cup heroics and his admirable support for Dreamflight. “No Limits” also tells of a young English boy with a Saturday job on a clothing stall in the local market place. He loved the display and the sell. He now admits to a fastidious, even obsessive, attention to what he wears for work. No surprise then that he has created his own distinctive brand of golfing attire that hunts where smart and tasteful meets out there.

And the trousers? Forward to St Andrews, 16-19 July 2015. Two media-photo-frenzies are predictable. Obviously, one focuses on the happy winner holding the Claret Jug aloft at the end of the last day. The other is when Ian Poulter’s trousers walk onto the first tee on the first day. The man wearing them will lap up the attention and calmly biff his first shot straight down that vast expanse of green over Granny Clark’s Wynd toward the Swilcan Burn. Go Poults!