This war memorial of white marble I found in Greenwood Cemetery, New Orleans, in the Summer of 2008. I do not know who the sculptor was. The city’s cemeteries are world renowned and some are truly vast, cities of the dead, endless rows of tombs in streets with names and one-way systems. This visit was the culmination of years of interest in this strange city, so, when I found myself in this atmospheric place, amongst its dead, squinting against the glare of the blistering Louisiana Sun reflected from the white tombs, I was in an emotional state and ready for some Beautiful Stuff. It was then that I saw him, this Confederate Infantryman leaning on his rifle. Inscribed below was: 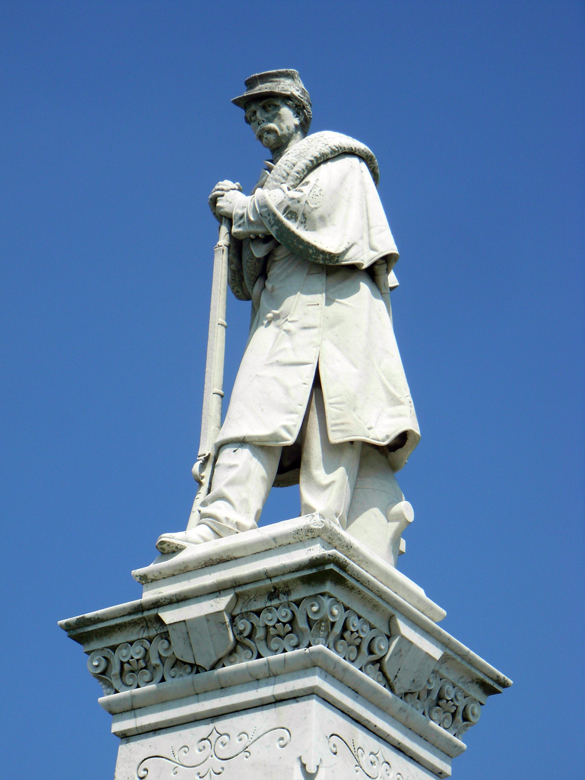 I found the realism of the style, the soldier’s pose and the composition of the work faultless. The skill involved, for me, is beyond admiration. For these reasons alone it is beautiful. But there was also a haunting beauty in the emotions that lead to its creation. This was a symbol of grief for the loss of the men these ladies loved so dearly, a symbol of acknowledgment of sacrifice and courage after what had been the most terrible war that Man had experienced to date. It speaks still of love and admiration for those who died for a lost and noble cause, a beautiful way of life and culture. I knew that culture relied upon the enslavement of the Black Race as the base for its economy but that does not detract from the pureness of the emotions that lead to the memorial’s creation.

It spoke to me also of the foulness of war, the corruption and stupidity of politicians, how patriotism, masquerading as a fine principle, can be so dangerous, how religion can create the ridiculous paradox of God supporting both sides, how the use of ceremony creates the heirarchies necessary to have men go to their death without questioning the order, the paradox of admiration for your enemy whilst you kill him, the hypocrisy of sending yours to kill theirs and then complaining when theirs shoot back and finally the overwhelming sadness I feel as I acknowledge the fact that war is as Human as is peace and that we can never be rid of it.