I was watching Cormorants fishing at the point where muddy Oxley Creek meets the muddy Brisbane River in Queensland, Australia, when I came across a strange sculpture.

Oxley Creek, near the junction with the Brisbane river. 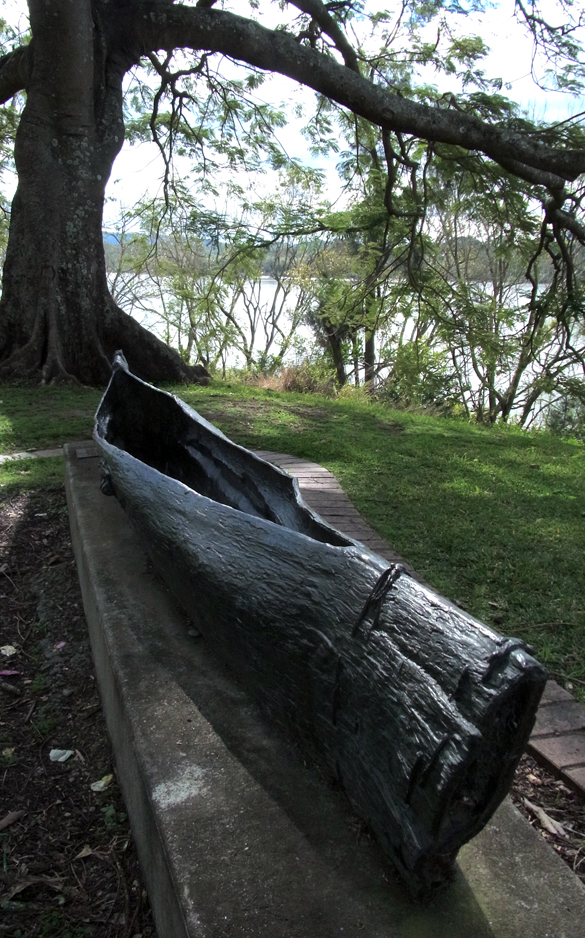 This is a bronze which apparently is a facsimile of an Aboriginal, bark canoe that was built to ‘acknowledge the Jagara people‘s  use of Oxley Creek’ as part of the ‘First Oxley Creek Water Festival’ in 1997. Brisbane City Council then commissioned sculptor Sean Tapner to create the Bronze at lifesize.

I felt it, tapped it and looked at it. The second thought I had, after one of admiration for the sculptor’s skill, was that if this were in the UK it would have been stolen at worst or vandalised at best. In fact it would not even have been placed in a small, suburban park on a riverbank like this for those reasons. But here it was, sixteen years on, untouched and flawless. 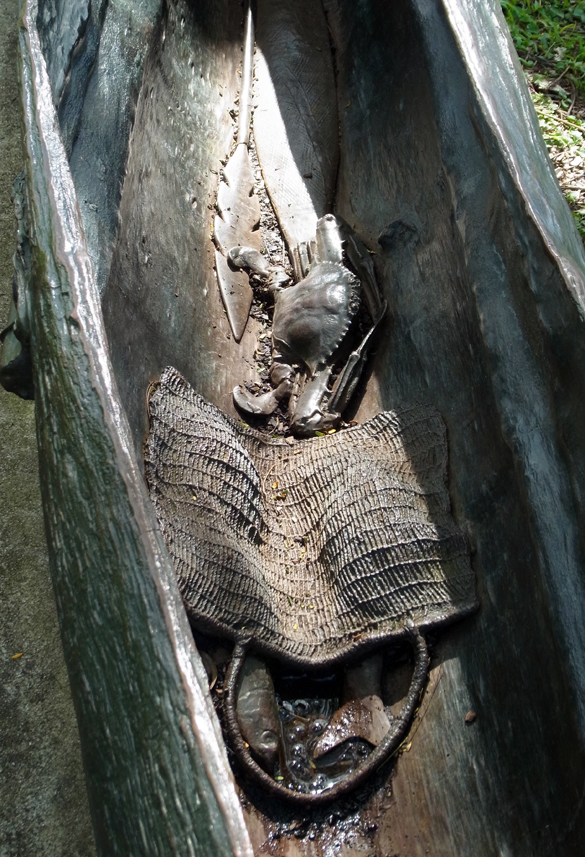 The canoe’s edges curl inward and I imagined how precarious I would feel sitting in it. I imagined those edges cutting into my bare skin as I paddled. I imagined the smell of fresh fish, mud and sweat; for lying in the bottom of the canoe, as if the Jagara had just hauled it up the muddy bank, is the catch of Mullet and a Blue Swimming Crab, a woven basket, a fish spear and a decorated paddle. And that’s it. Simply a realistic rendering of everyday objects. A still life? No obvious message or meaning. A council funded sculpture surrounded by Council barbecue points and some children’s swings to commemorate, in some way, a Council funded festival. But this thing was speaking to me. It forced its way into my consciousness demanding me to think deeply about it.

This canoe and its contents were resonating with rythms of an unchanging lifestyle from thousands of years ago. It spoke also of white, European, national guilt and the hypocrisy of those who believe that an ‘acknowledgement’ is atonement enough for Manifest Destiny, whilst Aboriginal peoples still suffer the legacy of it. These were natural objects because they were from a time and a culture that did not separate Man from the ‘Natural World’. Their ‘beauty’ was in their efficient functionality. Handmade, utilitarian objects, their meaning and their use the difference between life and death. No wonder it resonated.

It was only when I recognised the effect that the bronze had on me that I thought it might be a suitable subject for Talking Beautiful Stuff.