I take a wrong turn in the cavernous premises at 43 route des Jeunes, Geneva. The team from Espace_L are discussing their huge white walls in rapid Portuguese. They are amused that I ask to look around an empty space. They offer me a glass of wine. I find a young man untangling the fine strings of hundreds of paper kites. 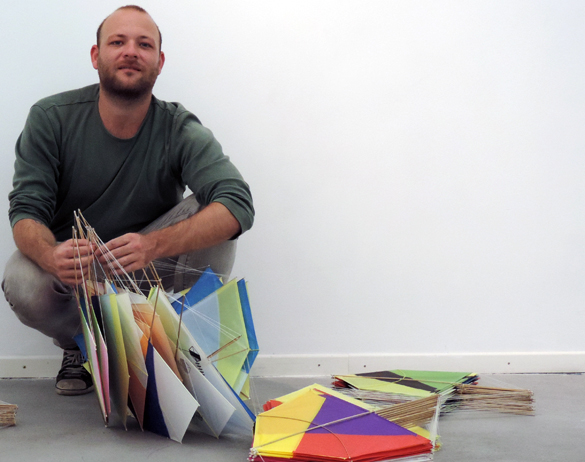 I learn that Marcelo Jacome’s “Pipos planos” (kites) has recently caused a sensation at Saatchi Gallery‘s exhibition “Paper.” I have the good fortune to stumble across him installing his masterpiece here. This is serendipity indeed. And…. My! Oh! My! Take a look at what Saatchi found! 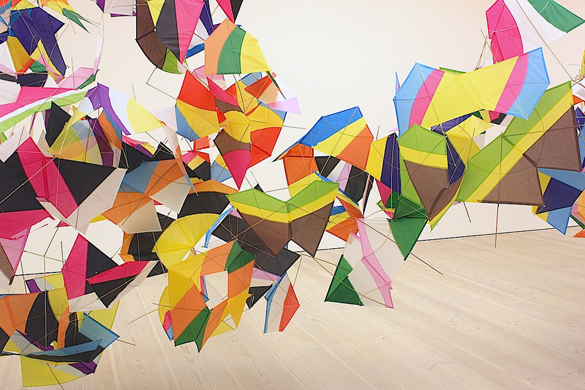 My first impression is of weightless, delicate butterflies driven en masse along a migratory route by some primordial urge. But then there is something human, dynamic and temporary about the chaotic shapes and hues: the tents at a massive rock festival maybe? Whatever, it fills space with colour and lifts the spirits. I am thrilled that I can see this work and others for real at the opening at Espace-L on 17 September.

Marcelo interrupts his work for a chat. This charming thirty-three year-old Brazilian architect took up painting eight years ago. His large studio led him to move from two to three dimensions and to explore what he terms “the chromatic mass of urban spaces.” He is animated in describing his journey. His influences? Henri Matisse and Arturo Bispo do Rosario. His music? Jazz! The best part of his international career? Meeting people! The worst part of his international career? Meeting more people! Who’s going to win the next world cup? Marcelo puts his head in his hands. “I hate football!” This is a very unusual Brazilian! I leave him to work out how he’s going to complete his installation. 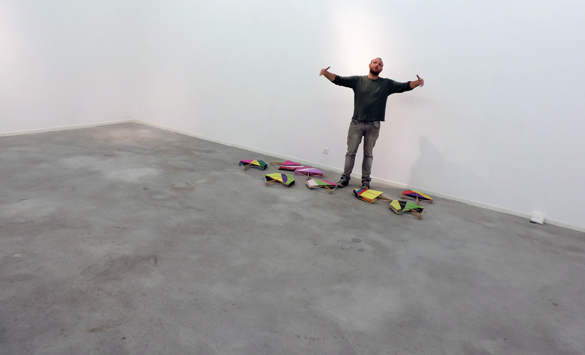