As I write this blog post a United States health official announces another ebola case in Texas. Fear. There is the first talk of a flight lock-down to and from West Africa. President Barack Obama says the risk of an outbreak of ebola in the United States is “extremely low.”

I hear there is an outdoor exhibition in Plainpalais organised by Geneva city council. It documents how the foreigner – read: immigrant, legal or illegal – has been depicted in Swiss political posters. It distracts me from this morning’s gloomy news. I am welcomed by a clever image playing on the Swiss flag and inequality. The posters dating back to the 1920s are both fascinating and alarming. I come to understand that a section of the Swiss political community consistently cultivates fear of the other with ingenious design concepts. This article is about the posters and how I see them as vehicles for political messages. As a general rule, I try not to express my own political views (even though I find some of the posters offensive!) 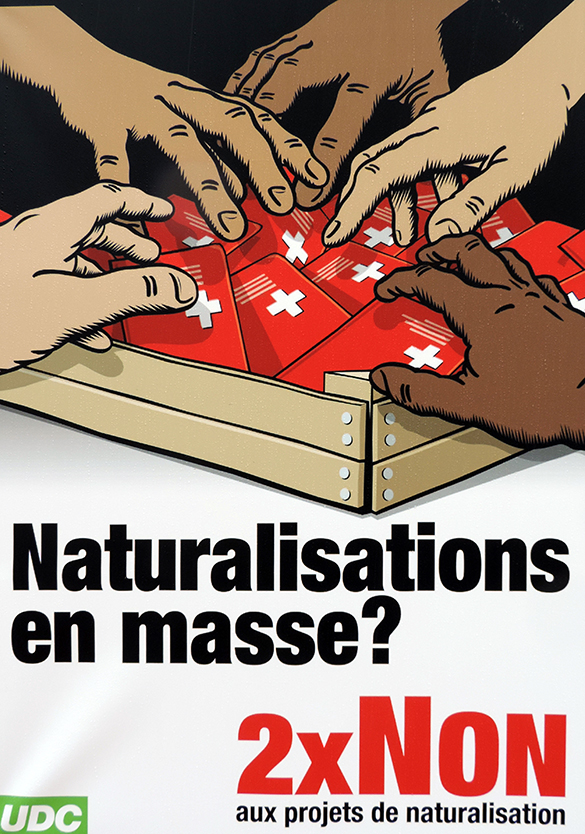 The principal means of depicting unwelcome foreigners is by indicating their darker skin. According to this 2007 poster, the worst case is that they might en masse gain Swiss citizenship. The designer here has created a notion of multi-racial greedy-grabbing of those all-too-accessible Swiss passports. The darkest hand is particularly clawing.

The same politicians really do not want others – especially if the others are muslims – bringing their culture to Switzerland. In 2009, the “Minarets debate” swirled about the limits of multiculturism. A black burqua-ed woman is clearly associated here with those black threatening minaret – missiles awaiting for their deadly countdown. The whole resonates with daily news of fundamental islamic terrorism. 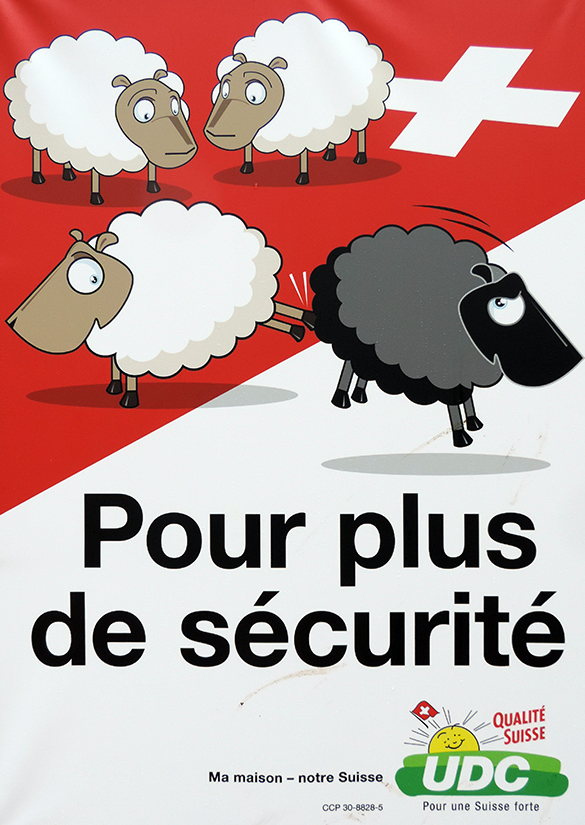 In most countries, displaying this 2007 poster would most likely end in a prison sentence. It is more than controversial. Kindly and innocent white sheep kick a black sheep out of Switzerland with a view to ensuring Swiss people more security. The furrowed brow of the black sheep indicates not surprise but his intent to get back in.

Fear generates loathing. Haven’t these people heard of Allport’s scale? Gordon Allport was an American psychologist who in the 1950s wrote about the nature of prejudice. He described a five step scale of prejudicial behaviour. At step one is “antilocution” – saying bad things to or about people of a minority. At step five on this scale is killing these same people. Come to think of it, maybe they have heard of Allport’s scale! This is just too awful to consider.

Let me emphasise that racial discrimination is not alive and well in Switzerland. The political parties responsible for the posters above are hotly opposed by the majority. 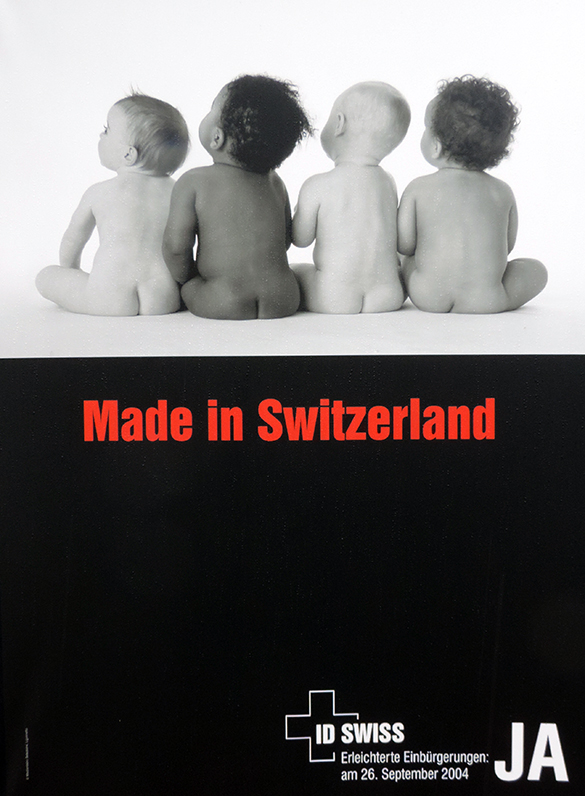 This 2004 anti-discrimination poster is also included in the exhibition. It is effective probably because, in my mind, it is so cute. I love its United Colours of Bennetton recall. The babies are looking up to a united brighter future for their generation in the arms of a soft and cuddly nanny Switzerland. 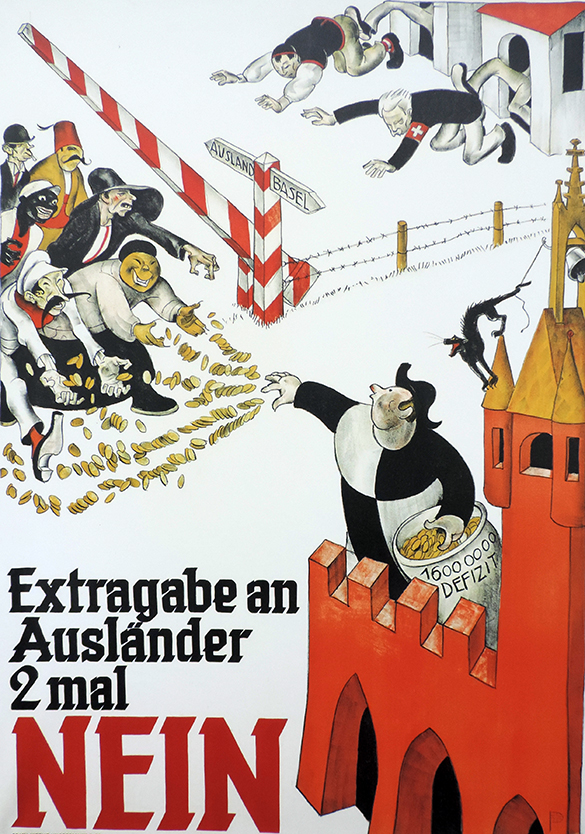 The issue is not new as shown by this poster from 1922. I can’t help being amused by image of the six steroetypical foreigners crossing the border into Basel where gold coin is lavished upon them. A multi-tasking black cat hisses at them and rings a warning bell. In parallel, Swiss people – presumably working in Germany just over the border – are kicked out of their homes. 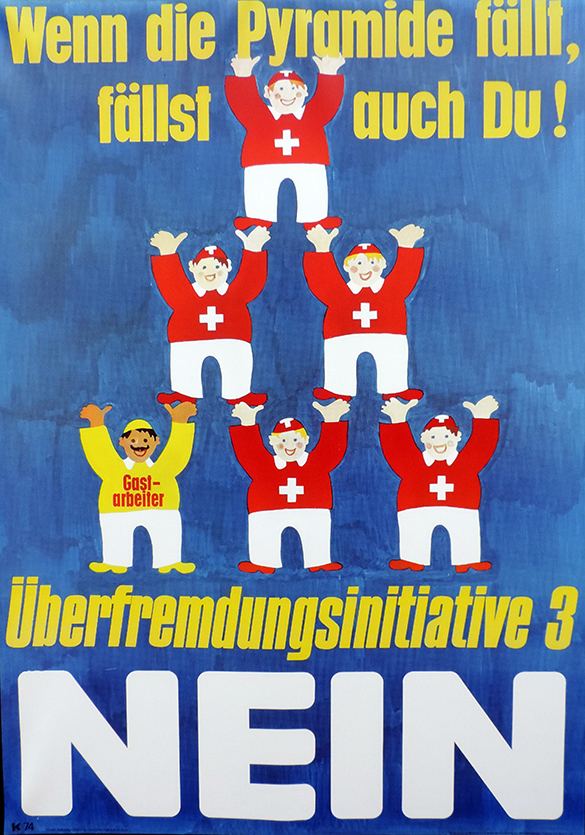 A poster from 1974 warns Swiss citizens that their nice stable economic pyramid should not be supported by “invited” labour. The immigrant labourer remains “invited” as long as he can be marked out by dark skin and thick mustache. 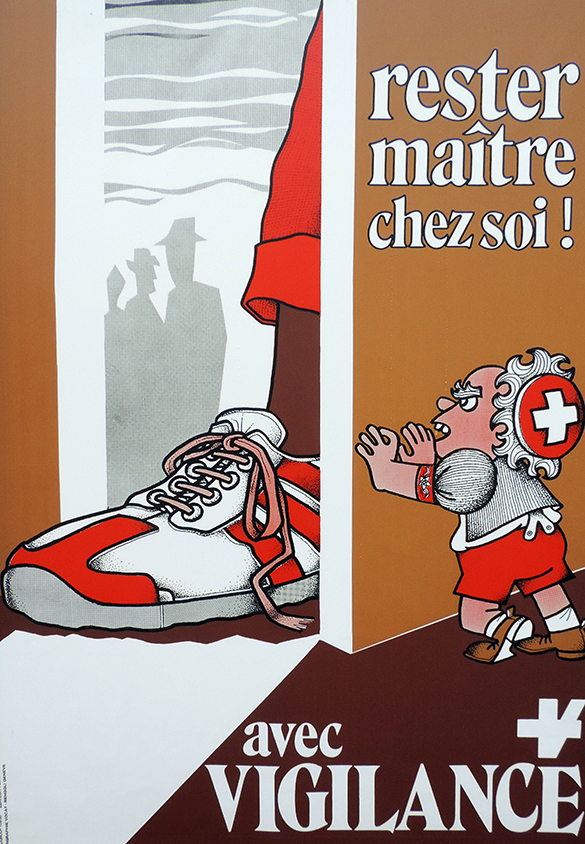 In 1983 those hoping to induce fear of the foreigner show cute traditional little old Switzerland about to be mugged at home by a black – note the skin – youth – note the trainer with frayed lace. The poster also implies that attempting to keep foreigners out is a hopeless task! Any viewer who disaproves or disagrees of the poster is clearly one of the ambivalent grey citizens in the background.

I can’t help reflecting on the unlikely juxtaposition of messages I receive from the news and from these posters. The President of the United States – with darker skin – calms fears about the spread of the loathsome ebola virus. The City of Geneva reminds us that some Swiss politicians clearly aim to stoke fear – and loathing – about people with darker skin. Thanks, Geneva! I know which I fear most!

2 thoughts on “Fear and loathing in…… Switzerland!”