This is photography in a league of its own. Imagine you have the words of songs on paper with no opportunity to hear them sung. Imagine also that the songs are amongst the most iconic of French songs sung by one of the most iconic of French singers. In his exhibition “Viens voir les comédiens,” photographer Patrice Fileppi sets out to deliver via images the passion, heartbreak, despair, nostalgia, jealousy and love-misery that the songs of Charles Aznavour engage. Does he succeed? You bet! 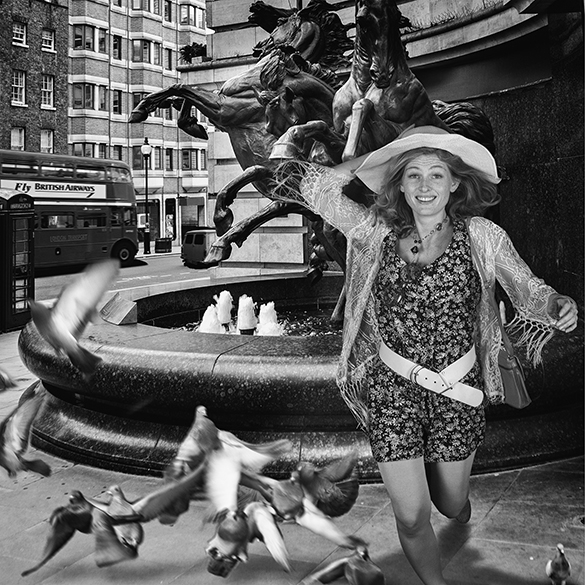 Fileppi gives me a tour of his exhibition. His iPhone allows me to hear Aznavour croon the most famous line of franglais: “You are the one for me, for me, for me formidable!” The corresponding photo is immaculately and beautifully staged. It radiates the misty-eyed moment of madness when a frenchman declares his love for a freckle-faced English beauty. The pigeons and the bronze horses share the startled excitement as she runs towards her new amour to throw her arms around his neck. The dress and indeed the freckles reflect the texture of the polished marble of the fountain (that in turn subtly alludes to multiple ejaculations.) A London bus goes by. It bears an advertisement urging us to fly British Airways; this is maybe how our gallant arrived in London. Was he invited over by a call from an O-so-British telephone box? 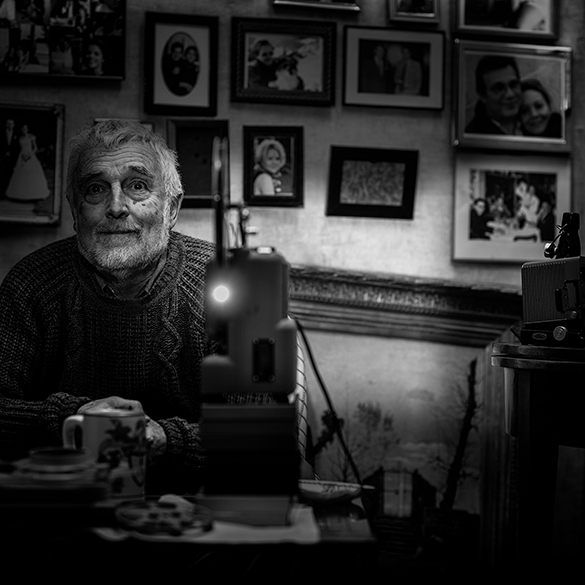 An elderly gentleman watches old films at home. We have no idea what is being projected. Whatever it is, it has reduced him to a kind of stupefied half-smile of nostalgia and regret. His hands are clasped as if in anticipation of a particular moment in the film. He is twenty years old again. Aznavour’s “Hier encore” is about times passed, time lost on stupidities, loves lost and a life that has achieved only a well-furrowed brow. In creating such a poignant image, Fileppi surrounds the man with fragments of his past but denies us, the viewers, a glimpse of what is moving him so. A large oil painting shows a half-open garden gate with nothing beyond. Despite its extravagant frame, the painting sits on the floor leaning against the wall. It is not hung because preference is given to a jumbled gallery of small photographs of people. The man wears a thick woollen pullover that gives warmth and protection against a cold and menacing loneliness.

Whist on a relaxing holiday in 2011, Fileppi’s mind idled. He then heard an Aznavour song. He then found himself really listening to “Comme ils disent.” He was profoundly moved. In his mind a scene appeared. He then wanted to photograph this scene… but first he had to create it. And so the story starts. This former electrical engineer – self taught in photography – tells me the exhibition “is a visual reflection of the emotion I feel while listening to the songs of Charles Aznavour. It is a tribute to him.” The exhibition comprises twenty large square photographs each representing a song that has touched him most. Why the square format? It is a timely allusion to those old vinyl album covers! 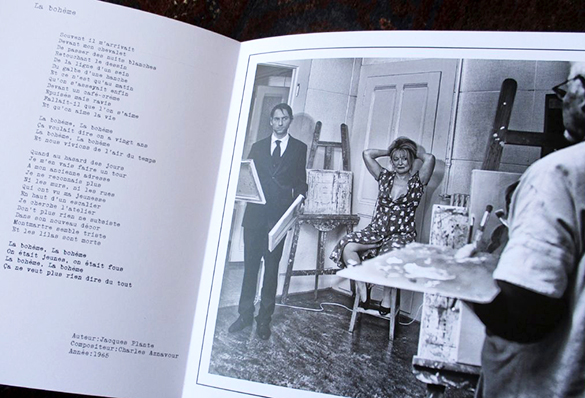 For a modest sum, Fileppi sells a sumptuous catalogue of these photographs in high resolution next to the words of the parent song. For fans of Monsieur Aznavour, my copy just happened to fall open at the pages dedicated to “La Bohème!”

This exhibition is hosted by “Images de Marque” at 12, Grand Rue (Old Town) in Geneva.  It runs until Friday, 28th October. Don’t miss it and don’t simply wander around looking. Seek out and let yourself be carried away by those wonderful narratives!