I stroll through the Norwich University of the Arts. A massive skinned, dissected figure outside the St George’s building stops me in my tracks. Bells from my anatomist past are jangling. Is this now the Norwich School of Medicine?

I ask at the reception desk what this is about. “Oh!” the nice lady replies with just a hint of condescension, “That’s Damien Hirst!” Ah!…. Silly me! I should have known. I learn that, unsurprisingly, the 7 metre high Hymn (play-on-words “Him”) caused controversy when first displayed. Is it “art”? (Pushing the boundaries etc. Same old!) Furthermore, it was claimed to be a direct copy of a 25cm educational toy; this resulted in a quiet financial settlement. Nevertheless, Hirst came out of it well by selling the sculpture to Charles Saatchi for £1 million.

Armed with this information I go back out onto the street and regard Hymn anew. With this sculpture, Hirst has within a few minutes taken me from curious to a bit embarrassed and then to intrigued. On knowing the provenance of Hymn, I then find myself admiring both the work and the concept. I ask myself if progressing through these mental steps is precisely what Hirst intended the viewer’s experience to involve. Whatever, he plays on our squeamish fascination for things scientific, forensic, visceral and medical and does so on a monumental and intimidating scale. This confrontation makes unavoidable the realisation that “Those are my insides!”

My last thought is: yes, Damien Hirst does it again whatever “it” may be. But then I’m sure that he couldn’t possibly give a damn what I think.

Robin, Isaac and I wait by the water’s edge of the Jardin des Anglais at the foot of Lake Leman. We are surrounded by Geneva in full fête mode. Merry-go-rounds go round merrily spinning every possible nationality; all smiling and taking selfies. Odourful stalls tout hot dogs, donuts and candy floss. But it is not the fête that excites us. The Compagnie General de Navigation sur le Lac Leman (CGN) has invited Talking Beautiful Stuff to take an evening cruise aboard the “Savoie.” 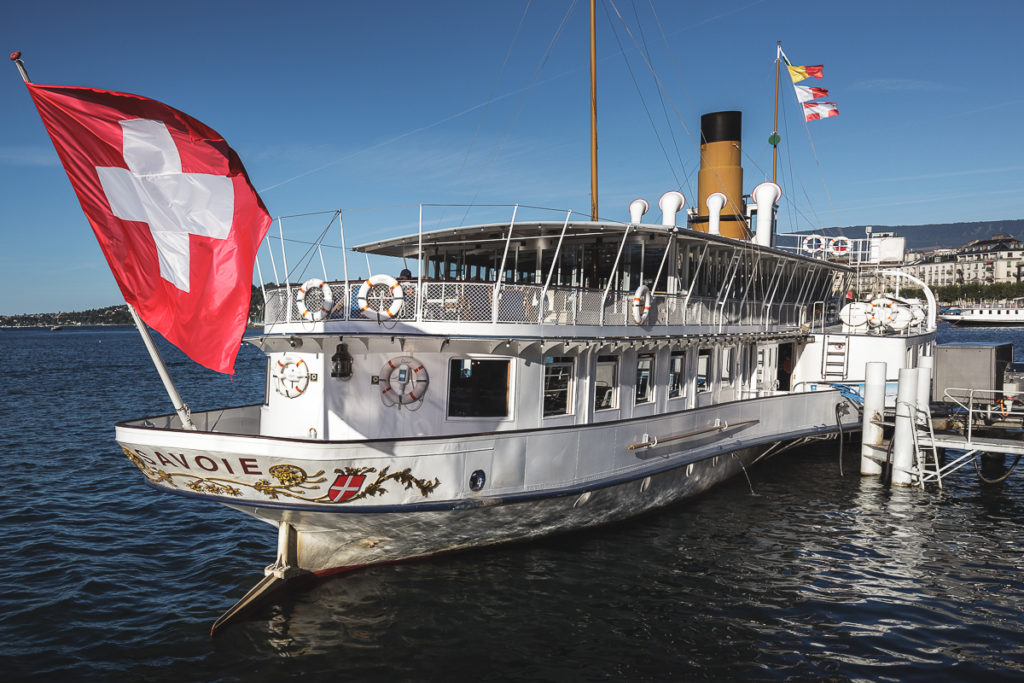 We watch in fascination as the most elegant of paddle steamers approaches it’s moorings to pick us up. Seagulls flap away as it gives a long, loud and steamy blast on its foghorn. We step on board. We are greeted by that delicate and unmistakable mix of fragrances of cool lake water, varnished wood and engine oil. 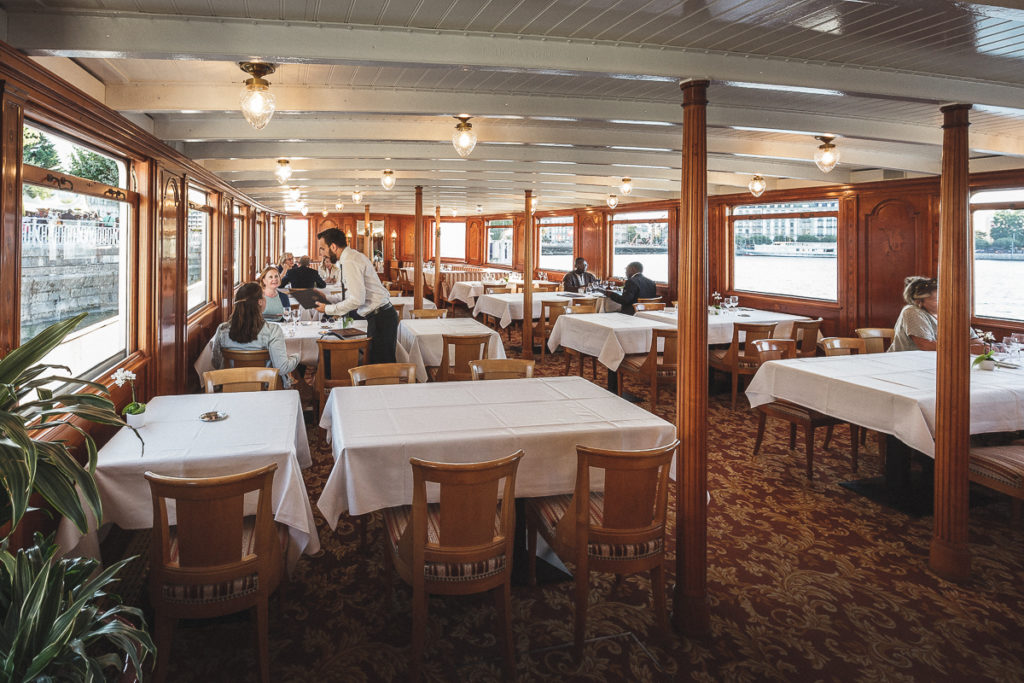 The setting sun catches the glasses and bottles of a welcoming little cocktail bar. The restaurant that will soon fill with our fellow passengers is all linen tablecloths and glistening cutlery. If one is looking for for a film-set fantasy romantic interlude, there is nowhere that better fits the bill. 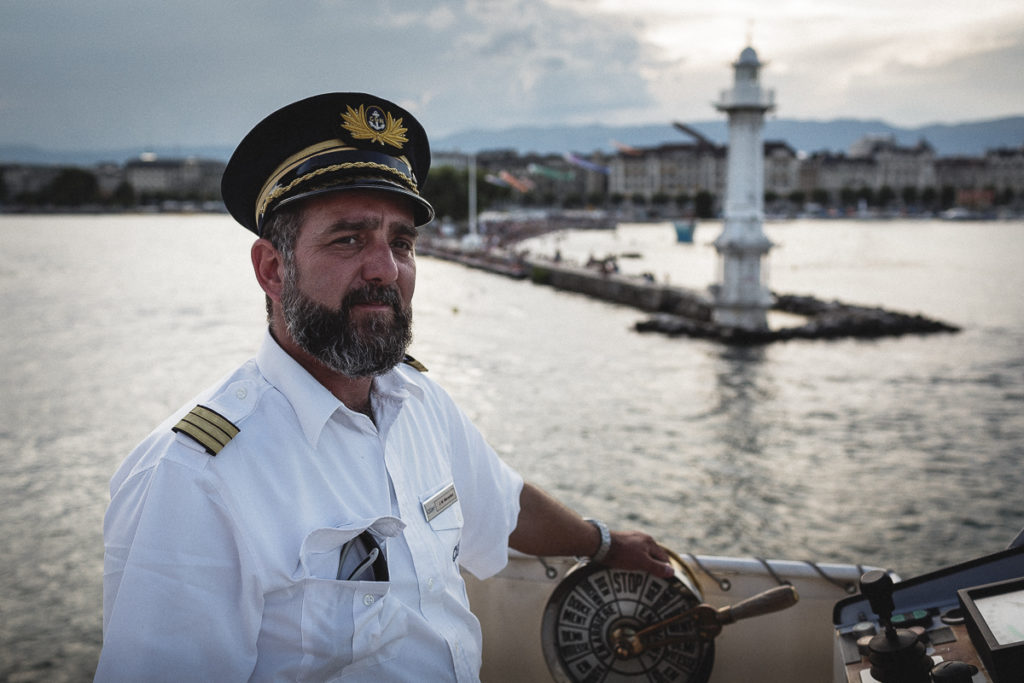 We are welcomed warmly by the captain, 48 year-old Jean-Martial Mercanton. He has been in charge of this vessel since 2012. He follows in his father’s foot steps. He describes his working day and responsibilities with unfettered enthusiasm and tells us the most satisfying part of his job derives from sharing the country’s heritage with others. His only headaches come from the unpredictable weather, especially the famously vicious storms that barrel up the Rhone valley from warmer climes to crash into and over the nearby Alps. This is a man who loves his job and, by all accounts, looks after his crew. 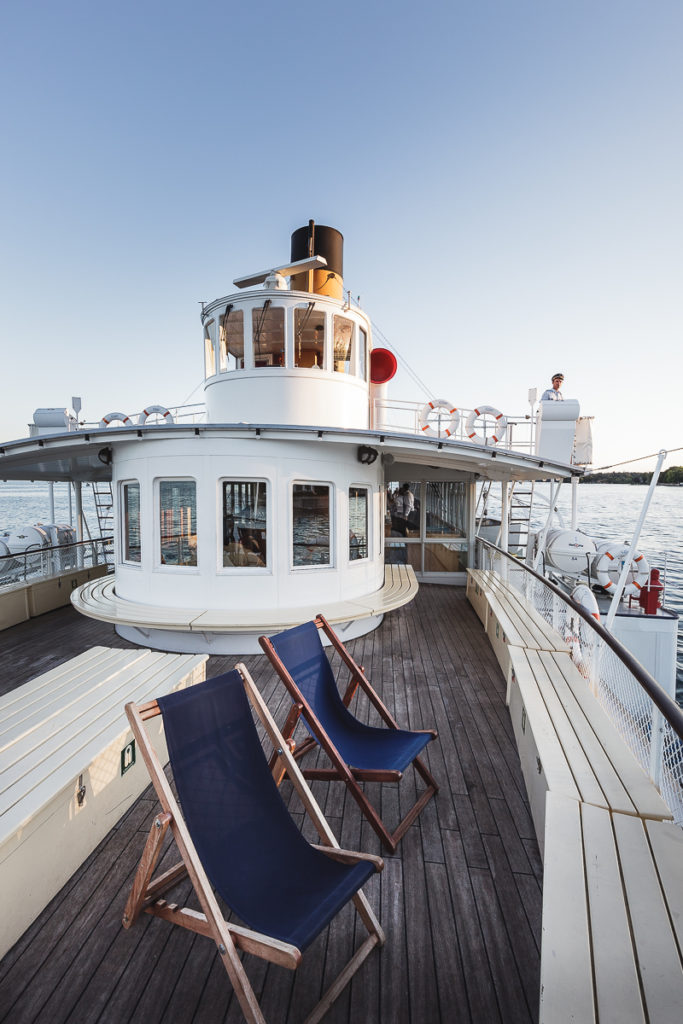 The Savoie, has to be high on any list scoring bygone nautical elegance and Captain Mercanton is rightly proud of his charge. It was built in Switzerland in 1914. The massive 900 horsepower high-low pressure cylinder engine was originally powered by coal. This was converted to oil in 1962. Amazingly, the boat only underwent its first full renovation in 2004. What’s more, this vessel is only one of eight of the CGN’s fleet of truly beautiful “belle époque” paddle-steamers. 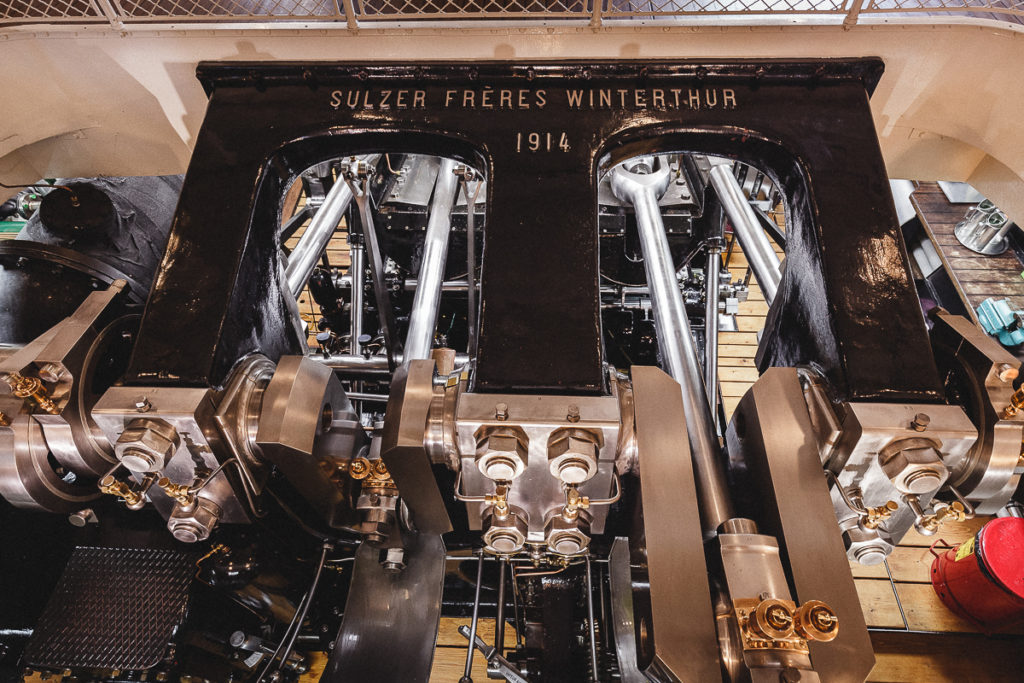 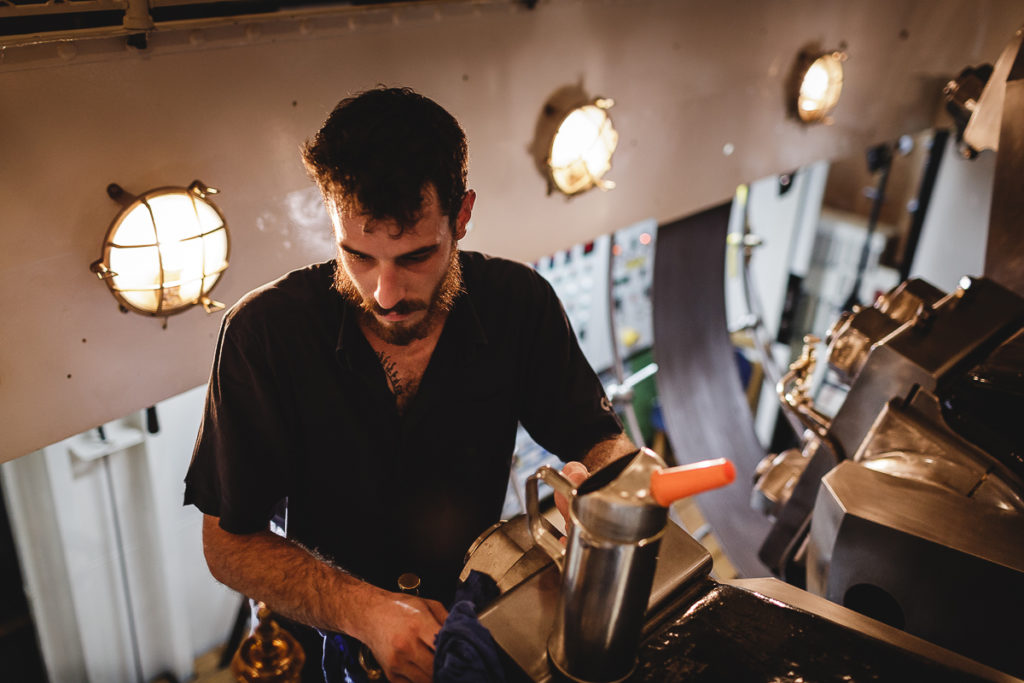 Twenty-five year-old Yan’s job is to keep the whole thing fired and lubricated ; he is never still. He handles the massive set of levers and controls with practiced ease taking his orders from Captain Mercanton the old-fashioned way by verbal orders. Between filling oil cylinders, checking steam and furnace temperatures he is happy to chat.

Yan patiently explains how the steam is produced from 16,000 litres of lake water, heated to 108 degree C, circulates through the two cylinders that drive the main shaft of the paddles and eventually exits having been mixed with lake water. We ask him if they have ever had a crisis on board. He tells of a day when there was a genuine engine failure with passengers on board. He was able to scavenge a part from another boat and run a temporary repair. The cruise finished albeit a little late. I note he refers to the engine as a person. Does he or she have a character? “She certainly does!” responds Yan. “She can be unpredictable. Sometimes the cylinders seem to get a bit out of synch and sometimes she just plays up and we don’t know why.” “Does she have a name?” I ask. “Yes, Josephine!” I ask where he will be in ten years time. “Right here! With Josephine!” he replies with a huge smile. 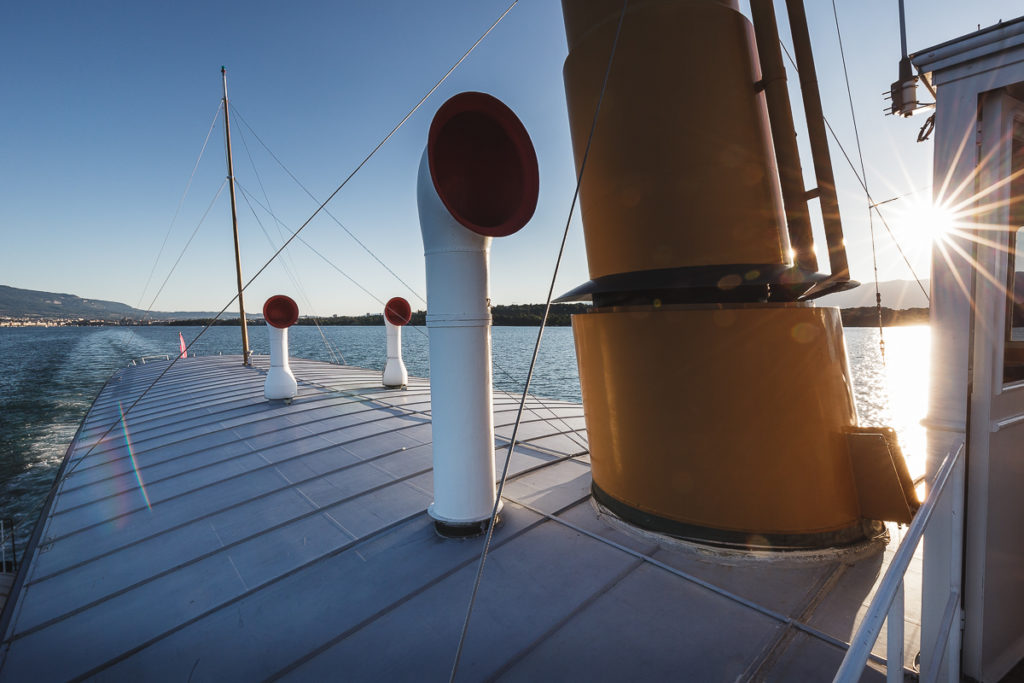 Drenched in perspiration from the 55 degrees in the engine room, we go up to the upper level and order a cool drink. The sun has almost set whilst in Yan’s domain. We are invited to look at the dinner menu and decide on scallops and delicate mushroom raviolis washed down with a fine local gamay. Lightening strikes on distant mountains as we cruise slowly back down the lake. I am overcome with a feeling that all is well in the world. Very well.

If there is one thing you should do when visiting Geneva, it’s to take a cruise on Lac Leman aboard the Savoie. In the meantime, take a look at some more pics of our cruise. 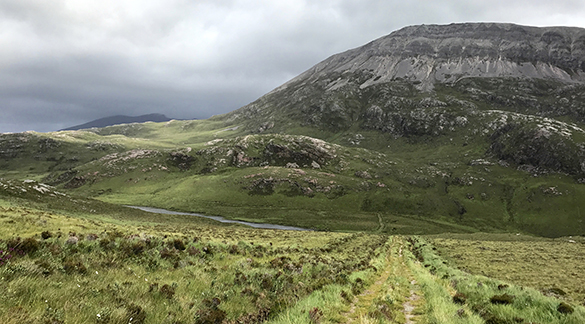 I first walked the stalkers’ track near Scourie in Sutherland, Scotland in 1982. Each return is a nostalgic and near-spiritual experience. This ancient and glaciated landscape is home to red deer, adders, tiny frogs and countless bird species including an occasional golden eagle. The lochs teem with small brown trout. The only sounds are the wind and the mournful call of golden plovers. That same wind carries a peaty fragrance with hints of heather and bog myrtle. This is a place that fills the senses and lifts the soul. 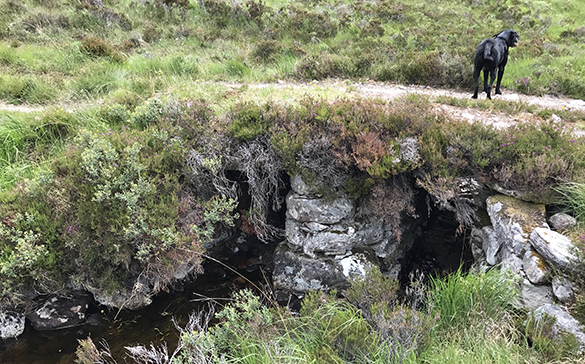 For some reason, maybe to look at a wild orchid or one of the small carnivorous plants that can be found here, I step off the track. I notice a wonderful little dry stone bridge that I must have walked over twenty times. I have never thought about how the track, that must have been laid at least one hundred years ago, actually crosses the multiple small streams that flow off these hills. I am fascinated. My canine buddy tells me I should look at this from the other side. 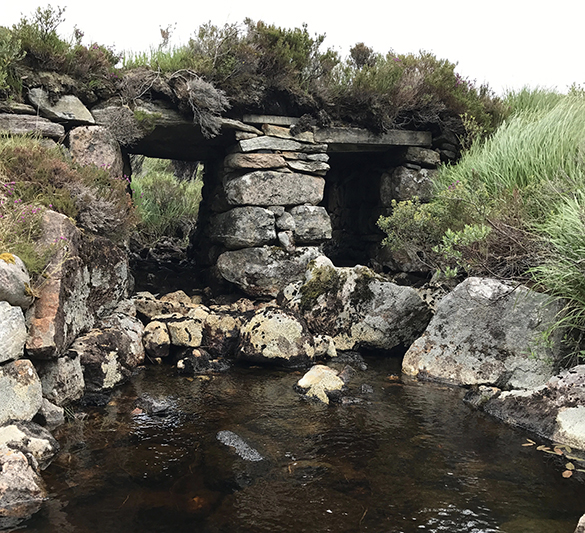 Just fabulous! To think, through its existence, this cementless structure has withstood floods and snow drifts together with the weight of human traffic whether on foot, horse and carriage or landrover. 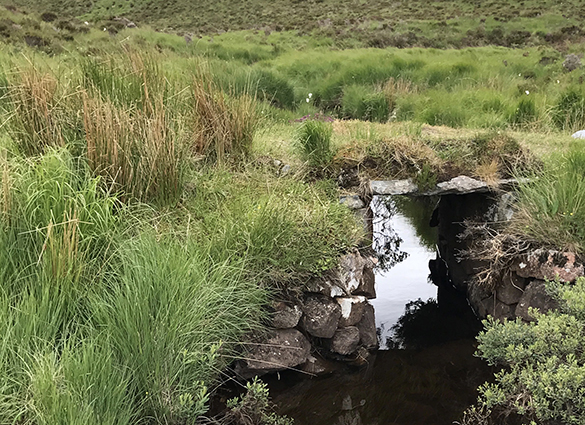 A kilometre along the track, I find another but with a single span. I notice these hardy little bridges are constructed from stones available on the spot. Large stones are stacked and stabilised with small stones wedged in. Maybe flatter stones were hauled in to make the cross pieces but it is difficult to look at them closely; they have been here for so long that they are now covered with heather and are just part of the track. As with the dry stone walls in this part of the world, I admire the skill and plain hard work of the unknown master crafts(wo)man/men who created these little gems. 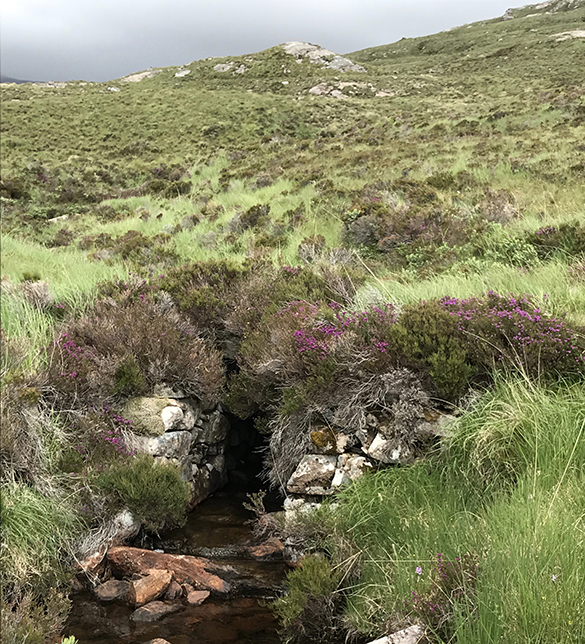 These bridges have a rustic, aged beauty accentuated by how they are now integrated into the environment. I find a third; it is so overgrown that, to see it, I have to step into the stream bed. My day just gets better.

Who else has noticed the dry stone bridges of the stalkers’ track? I wonder if I have happened upon a long-forgotten little bit of antiquity. Does or should some kind of preservation order apply in the event of maintenance or upgrade of the track? I try to contact the office of the estate concerned but without success. An internet search reveals nothing about these bridges (but I find there are courses on how to make one!) Is there an engineer-historian out there who knows about them? It would be great to hear from you.