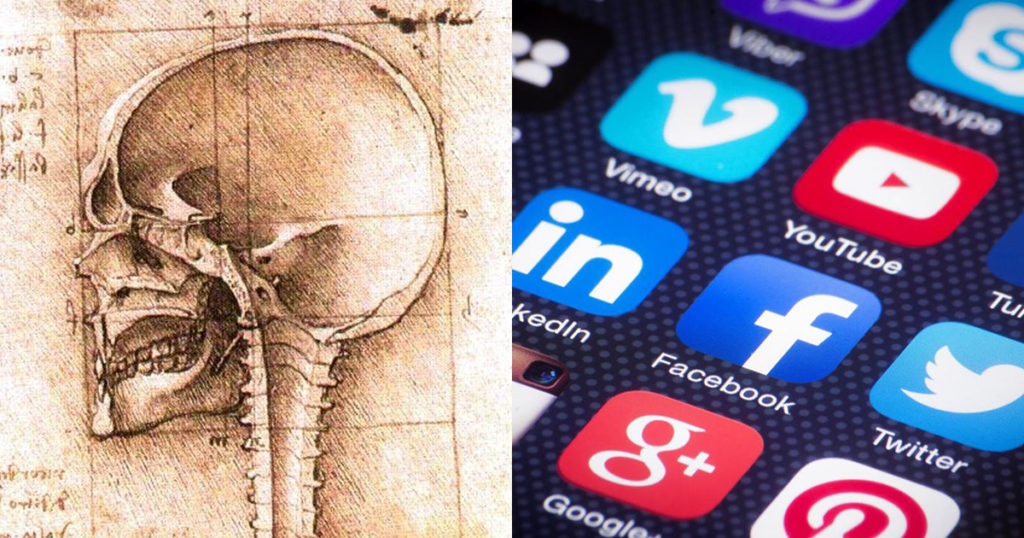 In brief…. We need to find a modern, objective, scientific and inclusive way of talking about humanity. I propose in this article that humanity’s success as a species has been driven by and will depend upon how an innate sense of right and an evolved ability to think things through together restrain our extraordinary capacity for armed violence.

The descendants of that little band of large-brained bipeds that made it out of Africa 40,000 years ago now inhabit pretty much every corner of Earth. As a species, we have, by any objective measure, prospered like no other. How? We have reproduced and acquired assets as a result of innovation, manufacturing, exchange, travel, communication, laws and accumulation of knowledge. It is now clear to us that the prosperity of our different communities is dependent not only on our material wealth but also on security together with “human” qualities such as honesty, trust, kindness and a sense of justice. Globally, humans are doing well; we live increasingly long and healthy lives that are less and less menaced by acts of violence (1). We are even giving serious thought to the impact of our booming existence on the planet. Bravo, humanity!

“The first principle to take into account is the principle of humanity!” explains the expert in international humanitarian law to a large group of NATO officers. He continues “Military strategy or use of a particular weapon system need to be balanced against humanitarian concerns.” Later, he makes reference to the necessity of a dialogue between humanitarian actors and military actors. At question time, an officer asks the speaker if he believes that people in uniform are devoid of humanity. Others murmur their approval of this justfied put-down. Any interest these men at arms might have had in this vital body of international law has evaporated.

When we talk about humanity, we may mean the entirety of human existence, that is, all of us. In this sense, humanity might be threatened by a pandemic, global financial collapse, climate change or an exchange of nuclear weapons. At the same time, we refer to humanity as a sentiment or spirit that is noble and altruistic; it is appealed to when some humans do awful things to others (2). There is an implication and even hope that humanity as a sentiment is a universal human attribute and, when expressed, is somehow beneficial to all humans. Both notions of humanity have had a strong influence on the development of international law especially in relation to crimes against humanity (3).

Let’s not forget that many of history’s ugliest examples of inhumanity took place when one group of people declared that a certain race, nation or community were somehow sub-human and therefore didn’t merit humanity.

A combined theory of humanity

Let’s recognise that humanity can mean the species homo sapiens or all humans (“humanity –species”) and that we have an altruistic notion of “humanity- sentiment.” That there is a link is intuitive; exactly what this link is and how it might globally promote people’s wellbeing is not clear. The starting point for understanding this link lies in a biological view of human progress.

The last two hundred years of the existence of humanity-species have been characterised by extraordinary success in terms of the number of us alive, how long we live and how well. The motor of this progress is our outsized brain and its associated mental capcities. The use of our capcities to innovate and to exchange has resulted in, for example, commerce, air travel and health care. To take full advantage of our capacities to innovate and exchange and to create communities in which innovation and exchange can flourish, we rely on other “human” capacities that have evolved in parallel and forge the link between humanity-sentiment and the well-being of humanity-species. Without a capacity for honesty and therefore trust, there would be no confidence that others will hold to what they say and so no economy, commerce, contract or treaty. We have increasingly looked for peaceful solutions to human interaction. We no longer have to view strangers with fear and as potential enemies. We use force less and less to get what we need or want. We are increasingly considerate of the suffering of fellow humans.

The mental capacities that have fuelled this recent progress are an innate sense of right and our cognitive abilities. A sense of right is close to a traditional notion of humanity-sentiment and means recognising and doing the right thing by others. It is the combined outcome of our capacities for morality, empathy, philanthropy, honesty, respect for others and kindness together with recognising and addressing injustice.

Our cognitive abilities give us the capacity to think things through. Not all of our behaviour is rational but we have evolved a great capacity for rational behaviour and decision-making. We can exert self-control and use common sense. We recognise that a society governed by rules is better than a squabbling anarchy. If we want something from a neighbour, we trade ; we don’t fight for it. We increasingly deny cruelty a place in our “civilised” world. We know there are consequences to what we say and do. We recognise that cognitive behaviour is a better route to harmonious relations than emotional behaviour.

I propose that, first, a more objective way of considering humanity-sentiment is in terms of our mental capacities and, second, that the combined application of our capacity for a sense of right with our co-existent capacity to think things through promotes the wellbeing of humanity-species by creating an environment in which family life, communities, health care, innovation and exchange are possible. Talking humanity means moving from a dialogue that is largely moral to a dialogue that is coherently moral and scientific with a clear objective: the promotion of human well-being.

Any future dialogue based on this combined theory of humanity relates first and foremost to the degree to which humans require security. People’s insecurity always has been and remains the most important issue determining their health and well-being (6). In reality, whether we live in security or insecurity is determined by our and others’ potential for applying force. We live in greater security now precisely because those responsible for applying force have been influenced by a sense of right with an increasing tendency to think things through. In other words, humanity-sentiment as in our combined capacities has become increasingly potent in the face of yet another human capacity: our capacity for violence. This must be one of our greatest achievements given how we have multiplied our capacity violence many times over by technical innovation  i.e., through development of weapons (7).

The big story of human progress cannot be separated from our history of violent conflict whether wars, uprisings or a states’ oppression of their citizens. The system of nation states that we live in now may provide adequate security for peacable and constructive human existence but almost all states were born of some kind of armed conflict (8). One would think that our increasing numbers over the last two hundred years together with the massive availability of weapons to nations’ armed forces would generate even more conflict over living space and resources. And yet we live in a more secure and less violent world than before (with some notable exceptions) with an increasing concern for those disadvantaged by conflict. So, is a capacity for armed violence a positive or negative influence on human progress?

Violence rightly carries negative connotations. The definition of violence adopted by the WHO stresses the impact of people’s injury, death, psychological harm, maldevelopment or deprivation (9). A capacity for violence need not necessarily carry such negative connotations. In broad terms, we prosper only when we live in security and when laws within the community can be enforced. Both security and law enforcement require designated sections of a population to carry weapons and, being equipped with a legitimate capacity for violence, only resort to actual violence under defined circumstances. As the situation in many countries shows, national security and law enforcement are not always promoters of people’s security and well-being. In brief, whether humans prosper to their full potential depends on the outcome of a balance between, on one hand, a capacity for violence and, on the other, the ability to restrain that capacity. This balance has increasingly tipped towards human well-being because those responsible for the capacity for violence also exercise their capacities for a sense of right and to think things through (10).

A new dialogue for humanity?

A dialogue based on a combined theory of humanity derives ultimately from recognising that the application of a range of mental capacities is necessary for promotion of people’s well-being and that these capacities arise from our evolved psychology. If accepted, the combined theory would make manifest that we are all potentially humanitarian actors indpendent of background or profession. Such a dialogue with soldiers, police officers, politicians, diplomats, business people and scientists among others could cultivate a view of humanity as a common enterprise. It would permit dialogue and education about humanity in modern, objective and useful terms. It would cement together the apparently disparate academic disciplines of biology, history, economics, politics, law and philosophy. It would deconstruct the exclusivity that is associated with humanitarianism.

The combined theory provides a common concept and language to consider any action or policy pertaining to security, law enforcement and to all aspects of the design, development, transfer and deployment of weapons. In fact, dialogue based on the combined theory already has a track record in the international arena. In 2017 more than 50 nations signed a treaty prohibition on nuclear weapons. The treaty negotiations were given impetus through governments being confronted by the self-evident impossibility of humanitarian assistance in the event of use of these weapons. This generated an effective dialogue parallel to the long term political arguments about the relevance or irrelevance of possession of nuclear weapons to national security (11). A similar process led to the 1997 Ottawa Treaty on anti-personnel mines and the 2008 Convention on Cluster Munitions; both treaty prohibitions relied on documentation of and generating concern for the impact of use of these weapons (12) in parallel to consideration of their military utility.

Our societies remain based on political, diplomatic, business, educational, military and law-enforcement hierarchies. The higher someone is placed within these hierarchies, the greater responsibility is bourne, therefore, by his or her sense of right and capacity to think things through. The combined theory would make clear the how, why and when of who within human hierarchies really contributes and who does not contribute to people’s continued well-being. It would encourage political transparency when addressing the dilemmas that an ever-growing human population presents in terms of environmental change, security issues and inequities.

Beyond the domains of security and law enforcement, dialogue based on the combined theory could contribute to people’s interactions in couples, families, schools and the work place (13). Education focussing on the importance of, for example, empathy and cognitive behaviour would reach beyond improving the lives of individuals and those close to them. It would show a clear line to their potential contribution to human existence more broadly.

The fundamental objective of this essay is to provide the basis of an inclusive, useful and modern dialogue about humanity. I have been asked what the ultimate pay-off would be for such a new dialogue. It comes down to this: recognising a combined humanity and the power of talking – at all levels – about any issue in these terms is the surest way to continue the incredible story of recent human progress. Humanity ultimately means all of us using our mental capacities to deny that the life of humans has by default to be “solitary, poor, nasty, brutish and short” (14). If I was asked to produce a class-room poster that plants a seed of the combined theory in the minds of destined-for-great-careers young people, it would read: Be honest! Be kind! Think things through!