I am in Cape Wrath, Scotland. The weather is… well… Scottish! It is Sunday. The locals remind me that, as for golfers at St Andrew’s, Scottish tradition dictates that trout fishermen also take a break on the sabbath. (“You know, Sir, even the wee fishes need their rest!”) My passion for fly fishing is displaced for the day by my passion for discovering beautiful stuff. However, apart from Lotte Glob‘s isolated ceramic wonderworld, this is not the place to find many painters, sculptors, galleries or studios. It is the most northerly and bleak part of mainland Britain. Just hills with a scattering of sheep, lochs and sea. And then I realise that my view is full of beautiful stuff: dry stone walls. 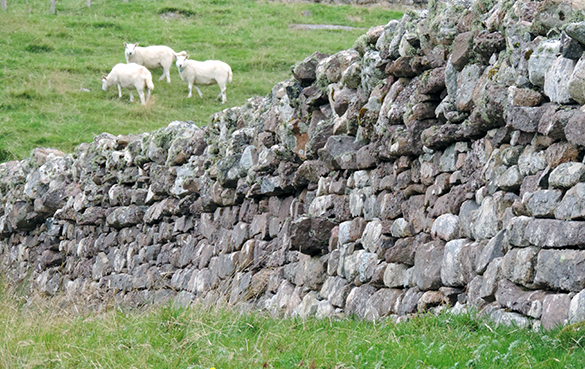 These walls are a major feature of the landscape of rural Scotland. They still serve as boundary markers and as fences to contain sheep. Some date back to the 1600s. Originally, land was cleared of stones for better grazing and crop growing. The stones were then piled up around the margins to contain the livestock. The history of Scottish dry stone walls is profoundly linked to the clan system, the volatile relationship between landlords and tenants, the infamous “highland clearances” and crofting. It is known that, centuries ago, many such walls were constructed by whole teams of professional wall builders. There is still a professional body dedicated to construction of dry stone walls. 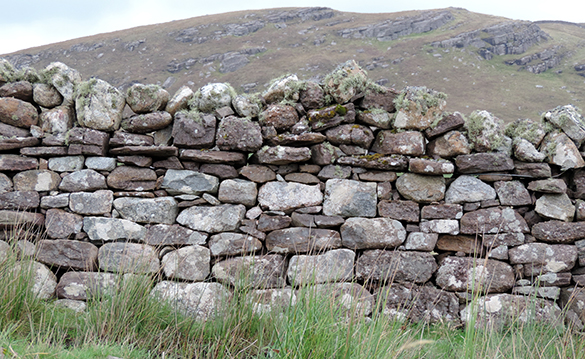 Dry stone walls contain no cement but they withstand the worst of Scottish weather (yes, the very worst!) However, their building involves much more than the simple piling of selected stones in a line. There lies within a recurring and more solid construction. The cross-section of such a wall reveals an “A” frame. The two lower limbs of the “A” are made of smother well-fitting and generally larger stones. Between them, unseen, is the “fill” of smaller stones. The cross piece and “apex” of the “A” are together made by the stones that sit atop the wall. Both the solid, weighty two-layer design and the enduring functionality result from a feat of engineering. As for stone houses, bridges and paved roads, I guess we will never know the name of the genius who first had the idea.

Cleverly and where necessary, the construction can simply incorporate a bigger unmovable rock that happens to be in the way. I am in awe of the skill of those who built these walls. I am mesmerised by the patterns and proportions created by the placement, shape, colour and texture of the stones. Other words come to mind. Resilience. Permanence. Balance. Complexity. This is beautiful stuff on a major scale.

I find a little bonus to looking closely at these walls. Over hundreds of years each plays host to its own ecosystem of lichen, moss, grass, bracken, spiders, mice and beetles. 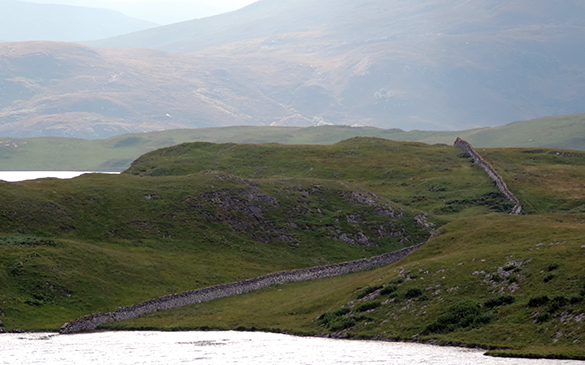 However, it is more than the the skill required to build these dry stone walls, their beauty and their place in nature that I dwell on. It is also the work invovled. I try to imagine being a builder. My hands are broad and calloused but dextrous nevertheless. My back is strong. I rely on an instinct guiding me to which stone is placed where and how it sits with its neighbours. Without this instinct the effort required would double as the stone in question must be moved, rotated, turned or even set aside for another. In physical terms, all I do is lift, place and move stones of up to 30kg. My working day is long. I build whatever the weather.

How accurate is my imagination? Is there anyone at hand who can tell me what it really takes to build a dry stone wall?

John Lennon was not famous as a builder of dry stone walls! However, there is a connection. Before the Beatles became famous, Lennon visited Durness near Cape Wrath  several times. His memories of the place and people inspired the song “In My Life” from the Rubber Soul album. In 2007, Durness dedicated a space to a John Lennon Memorial garden. And that tireless tinkerer in beautiful stuff, Roger Bunting, was a part of the team that made the dry stone wall that surrounds the garden. Roger shows me “his” part of the wall and is justly proud of it. I ask if its construction was hard work. “After two days, I was bloody knackered!” he replies.

I drive south. I see a sign to Oldshoremore. As I drive through this crofting village heading for its famous beach, the only obvious man-made structure in view is the Oldshoremore cemetery. It occurs to me that its surrounding dry stone wall is unlikely to contain those ancient spirits that will come to haunt me if I catch a trout for my Sunday supper?

2 thoughts on “The Dry Stone Walls of Cape Wrath, Scotland”