Tasman Golf Club, Nelson, New Zealand. It is pretty and quiet. I put $20 for my round in the “honesty box.” The sun is shining. I stand on the first tee. I am greeted by a fine view over the bay. All is well in the world. I hear a car pull up. Another golfer. “Fancy a round?” Friendly voice. Good bloke, I reckon. “Great idea!” I say.  “Mike Howell” he says. Firm handshake. 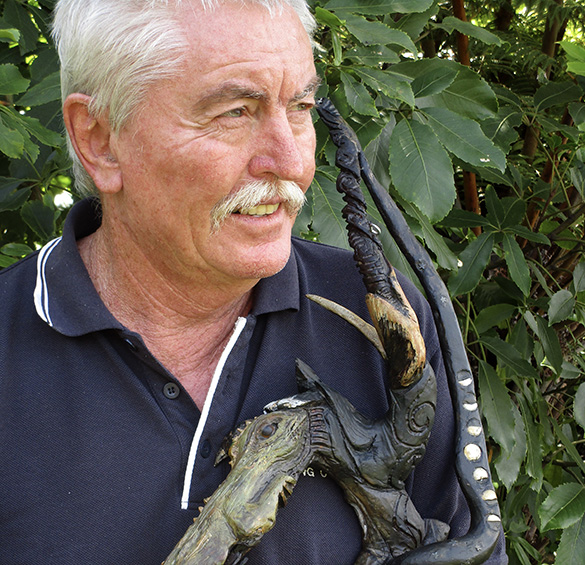 By the first green, we have established the basics of the who, what, when and where of our respective lives. By the second, I have learnt that Mike is no ordinary golfer; he is also painter, sculpter, teacher, writer, illustrator, scientist, conservationist, fisherman, hunter, traveller, grandfather and the golf club’s Mr Fix-it. I tell him of my brief foray into painting and Talking Beautiful Stuff and how I don’t like the word art because I can’t define art and how I hate artspeak. His spine stiffens slightly; he turns to look at me anew. It’s like a gundog that’s caught a new scent. I see I have stepped into his professional domain.

Mike’s entire home is his studio. It is hung about with beautiful stuff. I ask about what, at first sight, looks like a mixed-media collage of sticks and shells on a blue background. Some minutes later, I understand this is his tribute to the skills of the polynesian seafarers of yesteryear. For centuries, pacific islanders have paddled huge distances using for navigation aids only the night sky (the geographically arranged shells: note the two shells at the bottom doubling as New Zealand,) wave charts that record changes in the ocean swell thrown up by islands and reefs (the sticks) and the direction of flight of migratory birds such as godwits (the black twines.) These elements all come together in a pleasing and intriguing whole. I ask Mike about other paintings that could be described as “maori.” I realise that I have touched on what really floats his boat. He is professionally passionate about image-making as a means of education and keeping traditions alive among cultures that do not have a written history. He believes firmly that all children should be aware of the artistic heritage of their society and, as a means to bridge cultures, that of other societies as well. I am in awe of his clarity of thought together with his commitment to and eloquence on the subject. “But I have to show you my latest thing,” he enthuses. “It’s a tokotoko!” Right ! 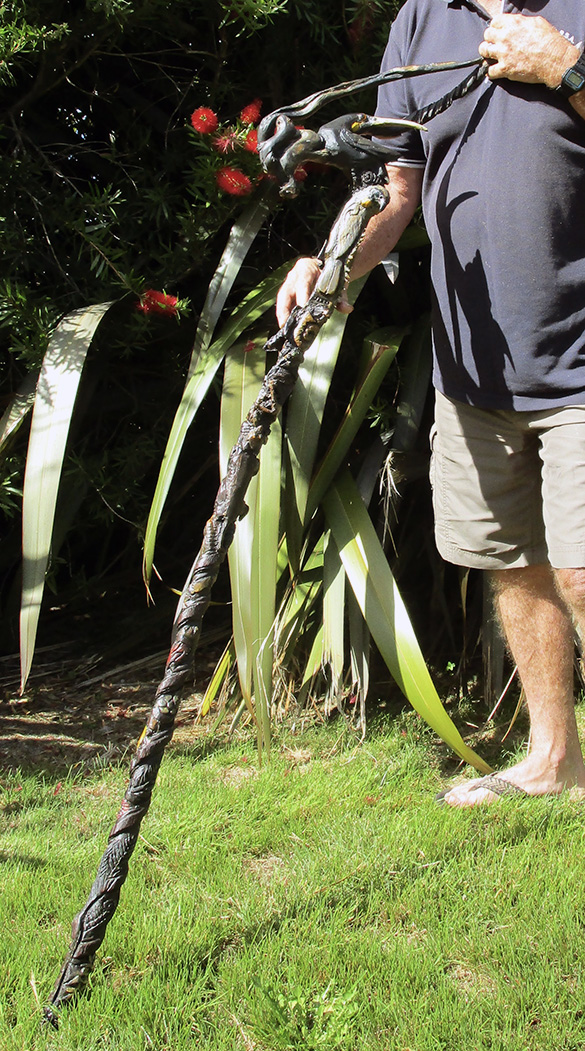 A tokotoko is a stick that a wise maori elder might lean on whilst talking of generations past and accompanying myths and legends. Anyone else holding the tokotoko has the authority to speak. This tokotoko is an exceptionally beautiful piece of work. It would be fitting for the most respected of elders. It is a driftwood sapling with roots that mike has meticulously carved and adorned to produce images of some of New Zealands iconic, rare or even extinct fauna. It is a hand-crafted lesson in the unique ecology of this country. 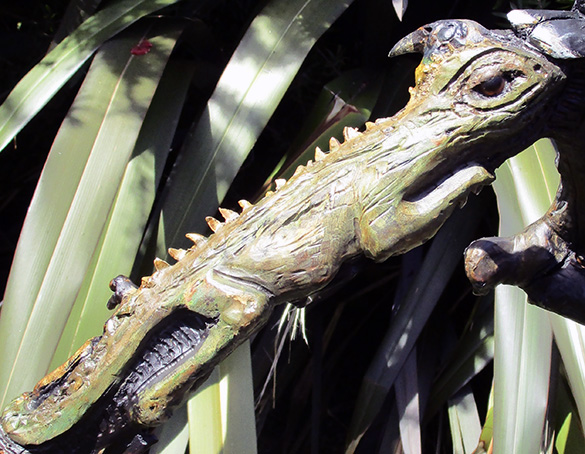 Prominent on the shaft is a Tuatara. In evolutionary terms it is a very very old beast. The name derives from maori meaning “peaks on the back”. I turn the tokotoko in my hands. 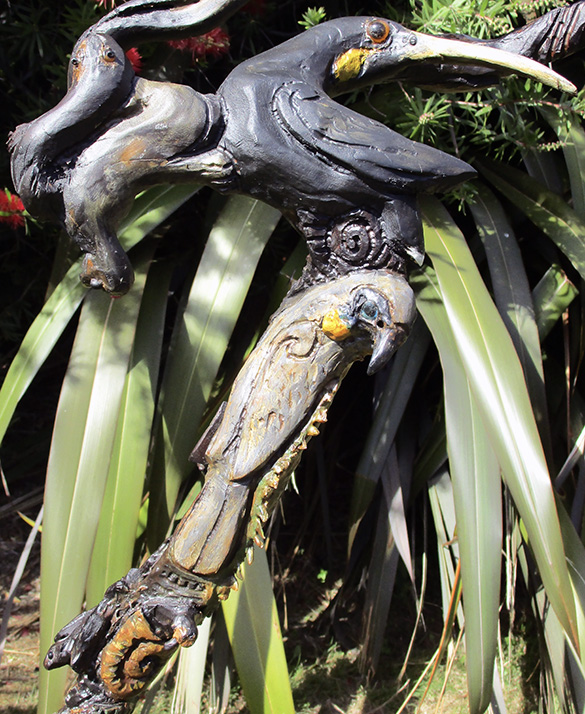 Top right I find a huia. It is now extinct. It was the largest of the New Zealand wattlebird species. It was a striking black songbird. Female and male huia had dramatically different bill sizes and shapes; this is thought to be the most extreme sexual bill dimorphism of any bird species. Underneath the huia there is a South Island kokako that is also believed to be extinct. However, occasional snippets of song and possible glimpses of the “Grey Ghost” continue to tantalise ornithologists. Lower on the shaft of Mike’s tokotoko there is a representation of one of the native giant kauri snails. These molluscs are carnivorous, cannabilistic and may live for up to twenty years. Some species are also declining in numbers. Nestling right next to the snail is the increasingly endangered lesser short-tailed bat (pekapeka-tou-poto.) It is, unusually, a terrestrial bat that forages on the forest floor. Top left is a long fin eel (tuna kuwharuwharu;) one of the largest eels in the world. Its potential lifespan is about one hundred years and is found only in the rivers and lakes here. It was an important food source for the maori.

The last feature of the tokotoko that Mike draws my attention to is a small brown godwit in flight. This brings our conversation full circle back to navigation. Each year about 80,000 of New Zealand’s godwits fly to the Yellow Sea (between China and North Korea), then on to Alaska, and back again. Precisely how they achieve this extraordinary feat is not entirely understood but it is certain that phases of the moon and the positions of stars (also incorporated on the tokotoko) guide these extraordinary birds on their epic journey.

I struggle to digest the aesthetic and intellectual span of Mike’s work. He very successfully makes manifest his eclectic interests and passions via a wide variety of image-making techniques. I take my hat off to him. He is committed to promoting humanity’s capacity to create beautiful stuff for the benefit of cultural future of generations to come. Meeting him is an enriching experience. And to think that when I first met him, I reckoned he was just a good bloke!