Each and every ground-level wall in Rome carries some scratching, scribbling, scrawling or spraying. Suffering enough from lack of public spending, the Italian capital is made only shabbier and sadder by the ubiquitous graffiti. This is vandalism on a grand scale.

But, up close, individual pieces are fascinating. Is this beautiful stuff? You don’t know who the “perpetrator” is. (Interestingly, one assumes that it is a young male!) What he is saying and to whom may not be obvious either. It may be a targeted insult, a statement of “this is our patch,” a declaration of love or support for a political movement. The media vary and may even date their application. Obviously, the older and more durable involve chipping or scratching into the wall whilst the newer and less durable are paint and chalk. Old and new alike submit to the flaking and crumbling of Rome’s backstreet walls. The result is something raw, mysterious, time-sensitive and even elegant. There is such a concentration of these pieces that they overlap and a chronology can be deduced. At the end of a long hot day and having walked the city for kilometres, I feel these walls proffer a glimpse into the soul of today’s Rome. 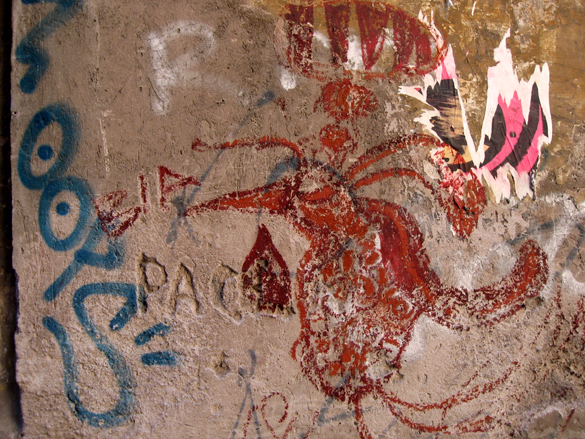 “PACE” is scratched deep into a repaired wall: a plea for peace dating back to World War II? A bizarre red and orange cockerel-like figure with an undecipherable thought-bubble is painted after the faded white spray paint and after a poster has been torn down. Blue spray last? Oops! 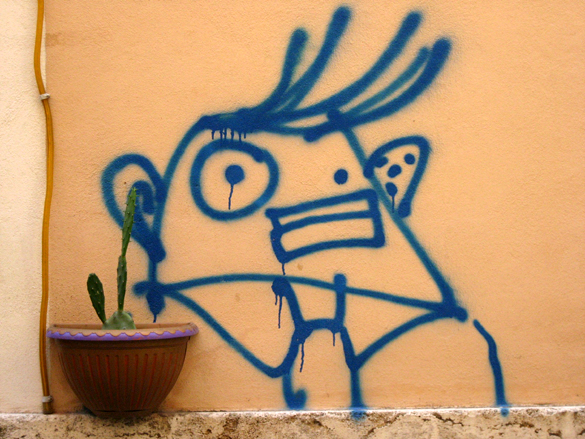 The clean beige paint on this section of wall without doubt covers other graffiti. The opportunistic wielder of a blue spray-can chooses to attack this fresh surface but meticulously respects the margins given by the cactus pot and the marble ledge. Is the Dilbert-like character with tie, spotty left ear and rectangular lips an uncle, a neighbour or a politician? 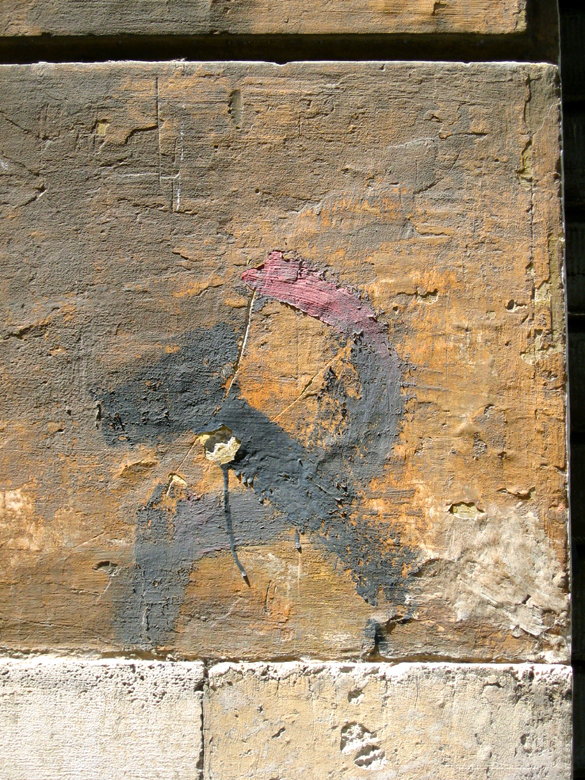 This hammer and sickle was probably painted during the cold war. Does the red tip of the sickle signify a bloody revolution to come? Or Mussolini’s blood?

Recently (February 2013), a purported Bansky “mural” in London has been taken – on its wall – for sale in Miami for US$ gazillions.