During the COVID-19 pandemic, I was reduced to three days’ work per week. This gave me time to get out into ‘the bush’, in isolation; watching and waiting for good photo opportunities. I have selected my favourite shots from this time for Talking Beautiful Stuff.

As the global pandemic gathered pace, in March 2020, I took a trip to Rainbow Beach north of Brisbane. The area is part of the Great Sandy National Park, an area of over 2000 km2 comprising threatened coastal habitats and including Fraser island, the world’s largest sand island. I found a family of Beach Stone-curlews living on a spit of sand, close to where the ferry loads and unloads thousands of 4WDs every year. Returning at sunset, I was able to get close to one of the birds as they are less shy and become more active towards the end of the day. The setting sun provided a beautiful, golden backlight. The species is threatened in parts of its range, as coastal areas are continually developed for tourism and local recreational use.

With COVID-19 restrictions being placed on travel throughout the state of Queensland, I was limited to areas close to home. Thankfully, here in Brisbane there is no shortage of parks, reserves and forests within an hour’s drive. Visiting one of my favourite lakes early one morning I saw a lone Comb-crested Jacana foraging on the lily pads. Their incredibly long toes make walking on the flimsy substrate a breeze; some people call them Jesus birds. I was able to get a nice, low angle by laying on the lake shore, blurring the lilies in the background.

At the same lake, there is a family of Forest Kingfishers that hunt the shallow waters around the vegetated inlets. They use a few, select perches to watch for small fish and insects, one of which is a dead tree close to the walking track. I set up my tripod and camera behind a tree on the bank with just the end of the lens protruding and waited…. and waited.. Finally, after 2 hours, one of the kingfishers settled right in front of me with a small fish in its beak.

By August and with restrictions easing in Queensland, I took a trip to Bribe Island that is accessible via a road bridge to the mainland. It is an important area for many bird species. There is a small population of Rose-crowned Fruit Doves which are known to over-winter there, in a small patch of remnant, coastal rainforest. They seem to feed almost exclusively on the berries of a single Corkwood tree. These are normally shy, secretive birds that live in rainforest canopies on the mainland, so this was a good opportunity to capture an image of this spectacular species.

As spring approached, I visited a friend’s property where several Giant Spear Lilies had sprung into bloom. These impressive plants produce enormous flower-spikes with bright orange-red flowers that act like a beacon to birds and insects from the surrounding green rainforest. One of the birds that visited was this male Regent Bowerbird. The males have a striking combination of yellow and black feathers, whereas the females sport a rather drab, scalloped brown. Male Bowerbirds are well known for their habits of building unusual and sometimes spectacular structures out of twigs and decorating them with a wide variety of foraged items. These structures are used as display platforms to entice in female birds to mate. The females then build regular nests in the forest nearby and raise the chicks alone.

The species I was really hoping to see on the Giant Spear Lilies was the elusive Paradise Riflebird. This is one of four species of birds of paradise found in Australia and the most southerly occurring. They are hard to see at the best of times; it is rare to get a chance of a good photo. The males have an iridescent quality to their plumage, only visible at the right angle of light. In the hope that a male bird would visit, I set up with my camera underneath a special camouflage net and waited. Sure enough, after about an hour the male arrived to probe the flowers for nectar with his specialised bill. The thin fog in the area gave a nice, diffused light that was perfect for bringing out the subtleties in the bird’s plumage.

Another bird that is common in the same area is the Crimson Rosella. These colourful parrots are generally found in more temperate regions and in Southeast Queensland are restricted to mountainous areas with cool, wet forest. I found one feeding on a roadside Rondeletia bush. When parrots are feeding, they can be quite approachable if you do nothing to alarm them.

On a trip to the western part of the Scenic Rim, a crescent-shaped mountain range southwest of Brisbane, I found a group of huge Grass trees in full bloom. These impressive flower spikes are particularly prolific after fire and are a magnet to nectar-feeding birds such as Honeyeaters, Lorikeets and Spinebills. I have struggled to get close to Musk Lorikeets in the past as they are nomadic and usually feed high up in flowering Eucalyptus trees. I was delighted to find about ten of them feeding low down on the Grass tree flowers. When a pair was feeding on a close flower spike, I turned the camera to portrait orientation to capture both birds in the image. They seem quite content with me being close by while they fed.

The weather begins to really warm up in Brisbane around the beginning of October; migrating birds from the north appear. Among them is the secretive Barred-cuckoo Shrike. I had never seen this species in Brisbane before and was able to get a clear shot of this one perching high in a Small-leaved Fig tree.

Reports of Channel-billed Cuckoos arriving in the area had started to come in on social media! These raucous brood-parasites from New Guinea make their annual southerly migration to Australia around October; they use unstable air masses and thunderclouds to ease the effort of the long-haul flight. They are consequently known by their colloquial name ‘Stormbirds.’ They are the largest cuckoo in the world. Many folk dislike them for their sullen appearance and loud squawk while flying around at dusk and dawn. However, I rather like them and consider their presence a welcome omen of warmer, productive times ahead for the natural world!

We are fortunate in Brisbane to have several sizeable botanic gardens which are beautifully maintained by the council. One of them has an impressive native plant section including Grevilleas that when flowering attract one of the most spectacular parrot species in the area, the Pale-headed Rosella. These are notoriously hard to get good, close views of. They are intelligent birds and highly wary. However, the birds in these gardens are perhaps more accustomed to human traffic and seem happy to be approached while feeding.

In mid-October, my wife, Kelly, and I took a trip to the Granite Belt region, about 3 hours southwest of Brisbane. The striking granite outcrops make for interesting scenery along the way. This area offers glimpses of a stunning variety of birds. On this trip, I clocked up 87 species of which ten were completely new to me. A highlight was staking-out a muddy puddle on the edge of a road where different birds would busily vie for position to take a quick drink after a hot day’s foraging. The star of the show was the spectacular tiny Diamond Firetail. This is one of Australia’s beautiful, arid-adapted finch species. It lives on the edge, making the most of the boom and bust climate when times are good.

Possibly the most successful arid-adapted finch species in Australia, is the Zebra Finch. Found over much of the dry interior of the country, they can survive for extended periods on only dry seeds and have been observed drinking water of high salinity that other species could not tolerate. This was another first for me and, in this image, a male bird is being harassed by his sizeable brood for a meal of regurgitated seeds!

The final image of my selection is a male Red-rumped Parrot. The species is generally only found west of the Great Dividing Range (a north-south spine of mountains separating the greener coastal strip of eastern Australia from the drier interior) where they live a semi-nomadic existence taking advantage of green, seeding grasses and vegetation where available. To get a low-angle to throw the background out of focus, I had to lay down on angry-ant-infested ground! Worth the effort, I reckon!

All images were taken on Canon equipment, mainly the Canon 1DX full frame DSLR body, paired with the EF 600MM f4/L IS II lens and 1.4X and 2X teleconverters in some cases. I shoot exclusively in RAW format and process in Adobe Photoshop CS5 using a monitor calibrated by a Datacolor Spyder 3. Some images were handheld, others used a Gitzo carbon fibre tripod paired with an Arca Swiss Z1 bullhead and Wimberley mounting plates.

Copyright on all photos: Ross Coupland

Ross Coupland has two passions; each is driven by equal talent. When persuaded to put his guitar aside, Ross Coupland indulges in his second passion: wildlife photography. He travels the globe capturing beautiful images of the natural world. He tells me he just wants to take photos and make them freely available. This strategy has brought him a BBC award for his primate photography. 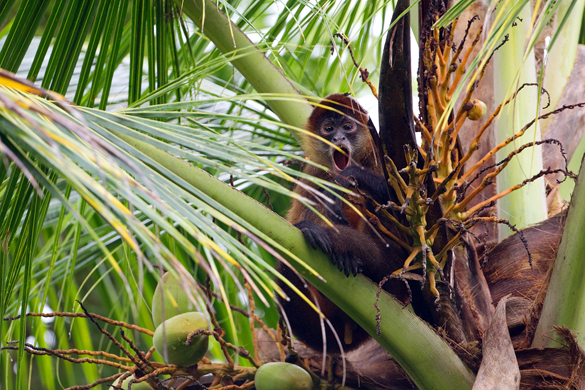 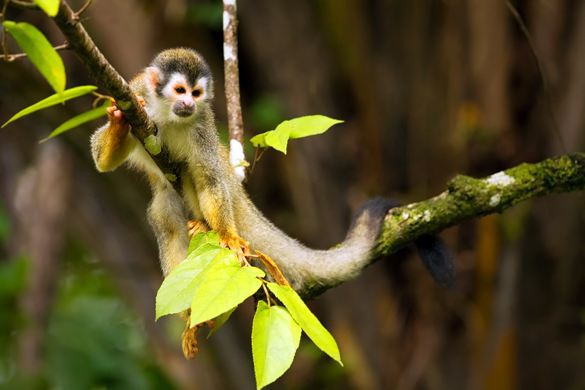 The Costa Rican squirrel monkey is small and elusive. I love the way Ross has captured this one: it seems very relaxed with its right leg just hanging down and with its tail draped over an adjacent branch rather like a discarded mink coat. 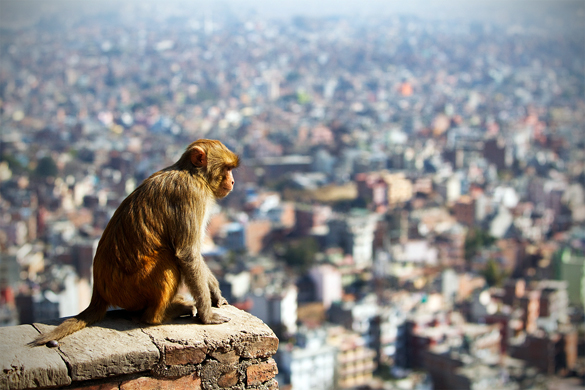 This is my favorite of Ross’s primate photos. A male macaque looks out from a brick ledge of the Swayambhunath hill temple complex. What makes the photo is the back-drop of the vast dusty urban jungle of Kathmandhu.