I cross Geneva on a hot day. I bump into a friend who asks where I am going. I tell him I am heading for Place des Nations to take photos of Broken Chair. “There’s some guy camping underneath it!” says my friend as if to discourage me. 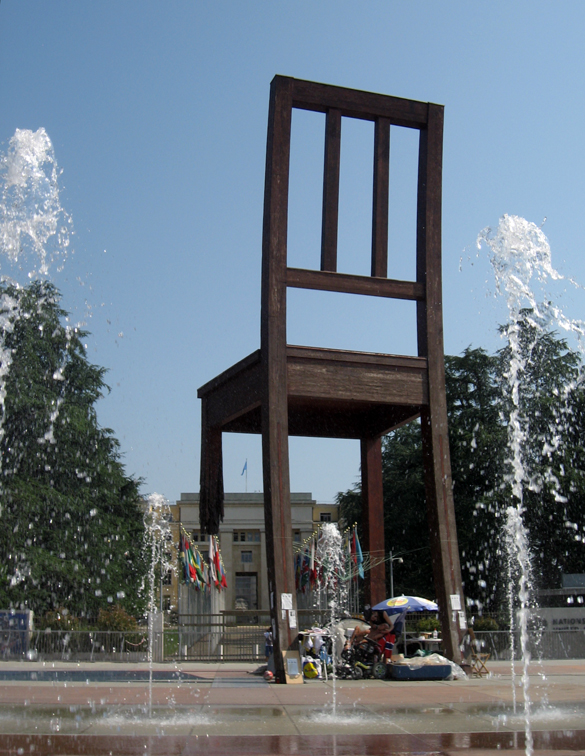 I find that someone has indeed set up camp under Broken Chair. Eric Grassien sits outside his tent in a wheel chair; the extent of his disability is obvious. A young lady is helping him to shave. We chat for a while. He gives me a business card and tells me he is protesting about the lack of suitable lodging for disabled people in Geneva. Around us, children lithe-of-limb scamper and scream amongst the cooling fountains that spurt out of the paving stones of this focal point of diplomatic Geneva.

Broken Chair is a powerful, unique, ambitious and intimidating work. It towers over the Place des Nations challenging the institution of the United Nations. Its installation by Handicap International in August 1997 aimed to encourage States represented at the UN Conference on Disarmament to sign the Canadian-proposed ban on antipersonnel mines. The idea was to confront diplomats with the stark fact that as long as they, the diplomats, sat in session in tranquil conference rooms undecided about how to address the global scourge of landmines, thousands of people going about their everyday business in countries such as Afghanistan and Cambodia were suffering terrible mutilations from the indiscriminate use of these weapons. Broken Chair came to symbolise the slow workings of the international community in the face of an urgent global problem. As a result, it has drawn criticism from members of the diplomatic community in Geneva. 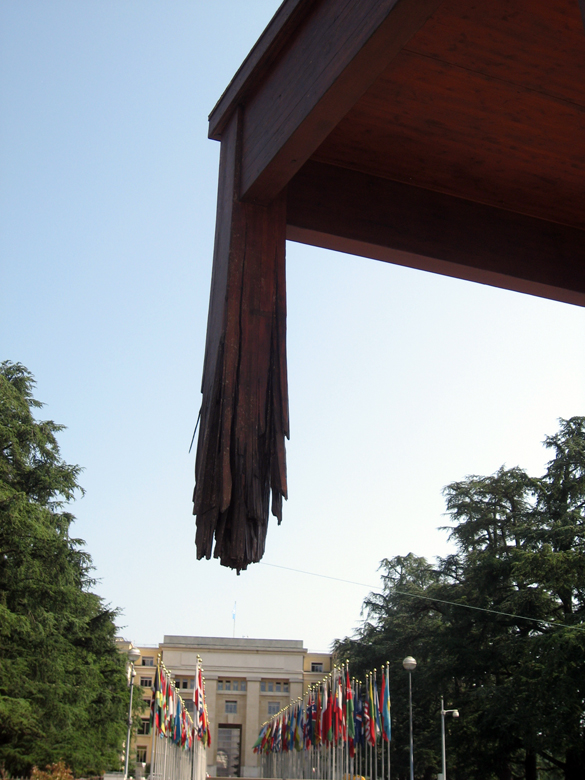 Daniel Berset was the creative mind behind this project. He has often made use of the theme of chairs in quirky, impactful and monumental sculptures. The power of Broken Chair rests not only in its size and the location. The broken leg is convincingly broken! It does not look like a broken piece of wood nor even a broken leg sustained in a road accident. Berset has successfully used the wood of the leg of an outsized chair to evoke the brutal mutilation of a human leg that can only be produced by explosive force. As Roger Bunting shows us with his landmine medal, beautiful stuff can be about ugly stuff.

But the story of Broken Chair and its impact did not end with achieving the 1997 Ottawa Treaty. A decade after “Ottawa,” a weathered Broken Chair had an overhaul as a follow-on appeal to diplomats about the 2007 Oslo Treaty banning cluster bombs. But… wait! There’s more! The plight of the hundreds of thousands of landmine survivors which came to light in the run-up to the Ottawa Treaty provided a major impetus for yet another treaty, also agreed to in Geneva: the 2007 Convention on the Rights of Persons with Disabilities. Even though Eric Grassien’s disability was not inflicted by a weapon, the symbolism of his protest is complete and the rights underpinning his cause have a global provenance. His little camp under Broken Chair resonates with the diplomatic history of Geneva.

Those close to disarmament issues say the Ottawa Treaty brought about a sea-change in how the world’s powerful governments view disarmament, weapons and the disabilities caused by weapons. We will never know to what extent Broken Chair played a role but it deserves its place as one of Geneva’s most famous landmarks.

I head back into central Geneva after my visit to the Place des Nations. Crossing Parc des Bastillons I pass in front of the International Monument to the Reformation: Geneva’s other iconic statue. The earnest faces of John Knox, John Calvin and William Farel and Theodore Beza stare back at me. (I feel they are accusing me of something!) I wonder if these stern men ever thought that nearly 500 years later, Geneva would still be a place of meetings that change the thoughts of and dialogue between nations.