“Beyond the Ground” is – from left to right – Rachel Tan, Gabriella Saniotto, Monika Schodowska and Eva Scherly. It’s like meeting an ascendant all-female rock band. But they are not in the music business. These feisty, creative women serve up a giddying cocktail of contemporary installations and eloquent discourse. I am a fan and, if I’m honest, more than a little intimidated. They rock!

Photography students together in London at Camberwell College of Art, they now master a variety of media and push boundaries. With a nod to Nicolas Bourriaud (“Au delà de la terre”) their heterogeneous works converge on a common theme: who we really are and where we come from. Beyond the Ground opens at 16.00 on Thursday 5th February at ARCOOP (32, rue des Noirettes, Geneva) with, surprisingly, a debate. Sociologists, ethnologists and psychologists have agreed to be a part of this event along with Christian Bernard, Director of MAMCO. The audience will participate. The goal is wide engagement in a dialogue about our roots. I ask the four if this is not too ambitious. They laugh. They exude confidence and motivation. 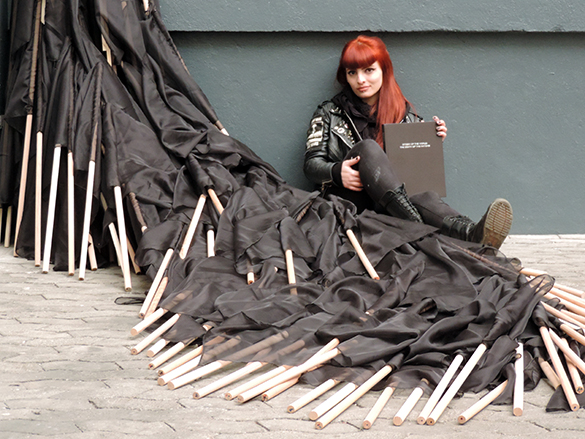 Gabriella Saniotto, “Citizen of the World: the Death of the Nations,” 2013, Installation, 196 black flags.

Gabriella Saniotto dresses in black. (This is, apparently, the colour of anarchy.) Her work hunts around the notion that all too often we refer to our nationality as our roots. She proposes that this is human folly. Isn’t it our nature that determines who we are? What if there were neither frontiers nor governments? Wouldn’t we be able to find our real cultural roots? Wouldn’t we have a richer human heritage? She sits by one of her installations. It is 196 corner-stacked black flags: one flag for each country in the world. 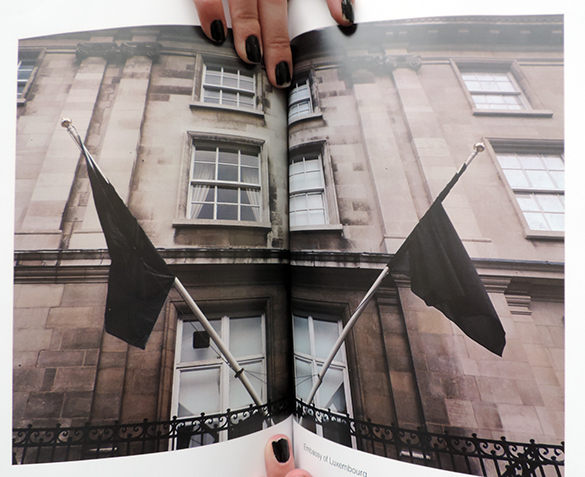 Photograph of the Embassy of Luxembourg in London in: Gabriella Saniotto, “Citizen of the World: the Death of the Nations,” 2013, Book.

The other half of her installation is a book of photos showing all the embassies in London flying only black flags. The outposts of each separate nation are thus portrayed in anarchic unity. 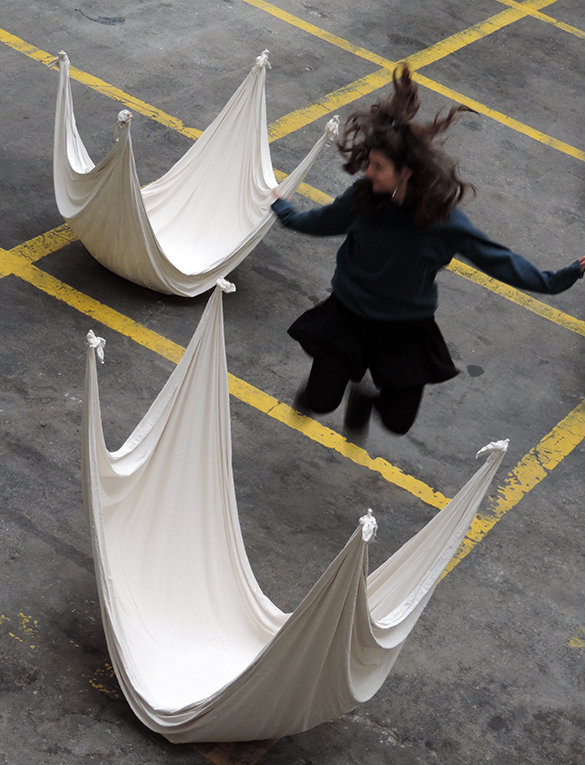 Centrally placed in ARCOOP – and made specifically for this event – are two beautiful and mesmerising structures. They are sheets frozen as if suspended by their corners: but there is nothing suspending them. Eva Scherly loves working with plaster of Paris and the ephemeral and delicate nature of the result. The works are created in situ and their construction involves several day’s drying time. They cannot be moved. They will be destroyed at the end of the exhibition. Eva sees the plaster’s cycle of dust to liquid to solid and back to dust as a parallel to a fundamental cycle of life. “And the roots?” I ask. “The title?” She smiles. The shoulders drop. Assertive becomes nostalgic. “Well… when I was a child, my father used to make quince jelly. He suspended sheets this way to strain the fruit.” 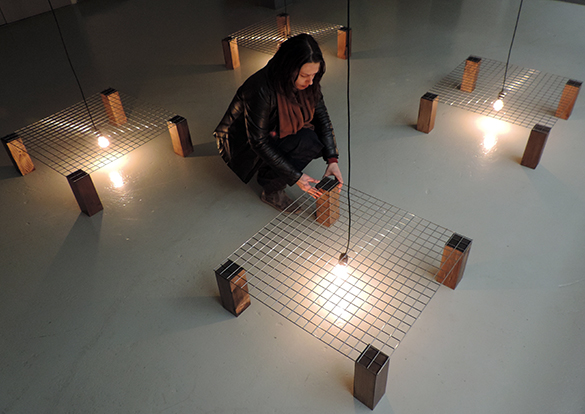 Monika Schodowska, “I knew I would come back,” 2013, Wood, metal grills and light bulbs.

Monika Schodowska is Polish. She has spent the last thirteen years in London. Her roots relate firmly to socialist Poland.  “Everything was politicised,” she tells me, hesitantly. “Especially aesthetics, architecture and space. Everything was conflict.” Her installation “I knew I would come back” is, she says, about warm domestic light emanating from low coffee tables. But it is also about alienation. She admits that she has difficulty finding the right words. Her creative capacities seem to have a more visceral provenance. At first pass, this work appears simple, banal even. But there is discipline and an elegant geometry. I listen to Monika and I wonder if the conflict to which she refers can be seen in “I knew I would come back.”  Warm wooden domestic furniture fights the order, stark metal grills and naked light bulbs of military security and prisons. Given a glimpse of what this work may be about, I find it very powerful. 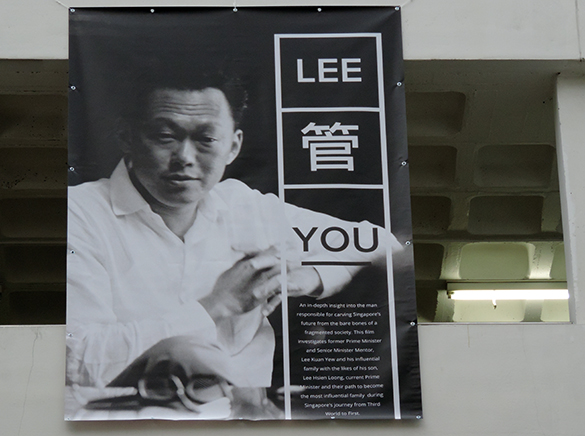 “Guan” in Chinese means “govern.” Lee Kuan Yew was Singapore’s first prime minister responsible for the country’s economic success. However, he exerted a very conservative authority on all creative activities. “Lee Guan You” (Lee Governs You) is the play-on-words title for one of Rachel Tan’s thought-provoking contributions to Beyond the Ground. She would love to return home to Singapore but it would be impossible for her to organise exhibitions of her work there because any such event has to be approved by the state-run Media Development Authority. Her installation here comprises posters promoting a film entitled “Lee Governs You” about the political dynasty Lee Kuan Yew founded, a letter to Ms. Tan from the Media Development Authority stating that she cannot show the film as planned and a video that begins with the title and then dissolves into a censored blur. Brilliant! Rachel states simply “To be who I am, I have to leave my roots.” 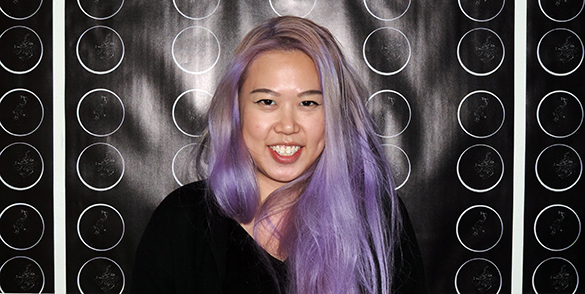 Rachel was determined to photograph her real self. Never bowing to convention, her self-portrait involved cultivating samples of her own DNA on multiple petri dishes and then photographing them. I guess you can’t get any closer to your roots!

In Beyond the Ground, Rachel, Gabriella, Monika and Eva strut a broad stage already set with politics and emotion. But I think there is an important, behind-the-scenes narrative being told here about our roots and how we perceive them. This narrative is based on our innate “soft” senses.  Whilst we recognise that our biology equips us with the five hard senses of sight, hearing, touch, taste and smell, science is now beginning to explain how our biology also equips us with, for example, a sense of justice, a sense of empathy, a sense of loss and a sense of the aesthetic. The fab four have, with their works and their discourse, opened avenues for us all to explore two other soft and innate senses necessary for our survival as a social species: a sense of community and a sense of home.

So come and kick-start Beyond the Ground. You’ll discover something about your roots.

1 thought on “Beyond the Ground: It’s all about our roots”