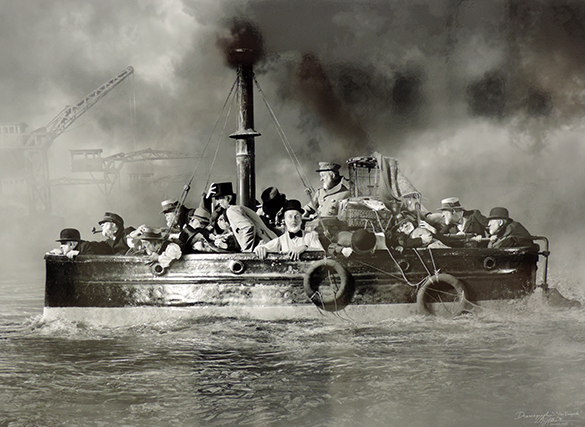 The first piece that catches my eye – because it is so topical at present – is “Les Emigrants.” Fourteen men in old style music-hall clothes are packed into a tiny steam-driven tug boat. Most peer forward. One is the captain. One is trying to catch fish. Others are in a dispute of some sort. One looks directly at the camera utterly surprised. The scene makes me laugh but at the same time, I wonder what the story is. The black and white image is clear and crisp. The whole thing is like a beautifully composed frame from an old silent movie. 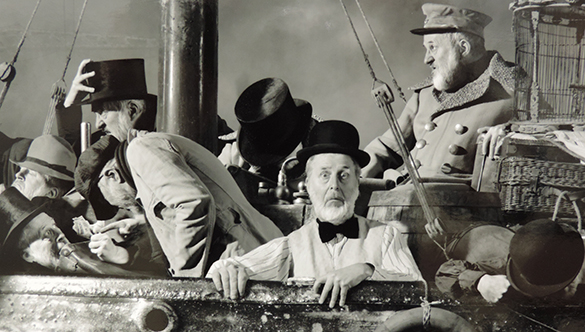 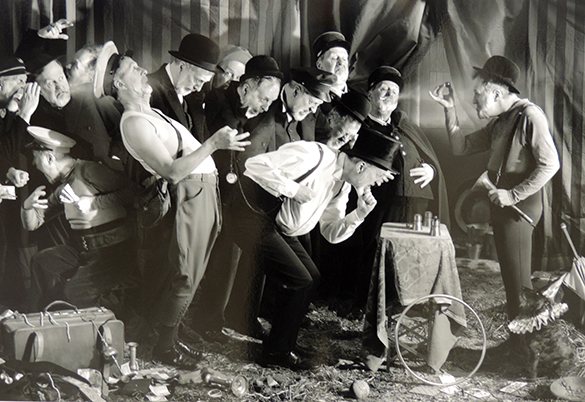 “L’Escamoteur” shows a kind of behind-the-circus scene where some scruffy old guy is tricking another in a top hat with the old ball and three cup trick. The gendarmes look on; they are clearly amused but at the same time try to give the impression they have seen it all before. While their attention is diverted, bets are taken and a pocket-watch is picked. It makes me laugh out loud.

Again, all these characters are the same person. Now I understand. These “dramagraphies” are also carefully staged self-portraits. My admiration for Monsieur Lagarde is growing. 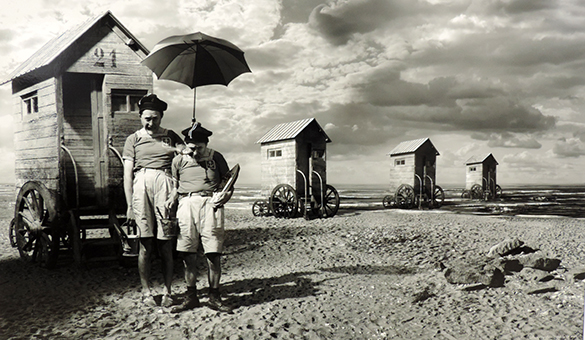 The two figures in “Quand la mer monte” are, inevitably, Michel Lagarde himself. At this stage, I really want to know more. After extending a warm welcome Cyril Kobler himself, explains the technical aspects of these images. Indeed, part of the exhibition shows the multiple precise steps in their construction. All were completed between 2009 and 2014. 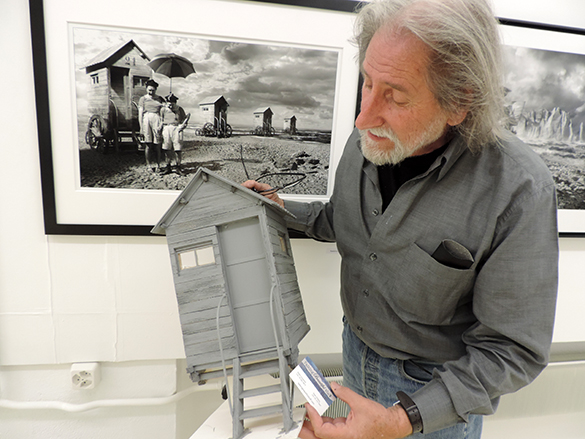 Lagarde was originally a designer of theatre sets and so has always worked with models. For his “dramagraphies,” he starts with making a model and takes a photograph of it. M. Kobler shows here the single model used for “Quand la mer monte.” From this starting point he uses Photoshop to alter this image and, in this case, re-insert it in perfect perspective. He then introduces other elements including the self-portraits. Everything including all light and shadows are precisely layered in. The final fantasmagorical output is the result of hundreds of carefully composed image-files, gigabytes of data storage and anything between twenty and forty days work. Lagarde’s beautiful stuff is a wonderful constellation of love of theatre, imagination, story telling, lighting and total mastery of Photoshop.

The photographic work of our host, M. Kobler, is also well known. He admits he might be viewed as a traditional. So here he is, putting on an exhibition that is not of photography but uses photography. How does he feel about Lagarde’s work? He is full of admiration. He sums it up in two words. “Truly remarkable!” 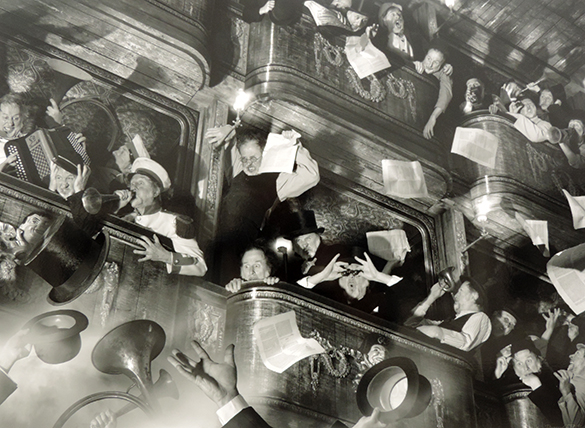 My favourite, “El Publico” has at least 18 self-portraits. It shows an unruly theatre audience unable to contain its excitement in the stalls. You can hear the shouts and the trumpeting. However, the on-stage action is not in view. These guys have just witnessed something they have never expected to see. Something terrifying. Something outrageous. My guess is that the two halves of the magician’s beautiful assistant who was brutally sawn in two has miraculously reappeared on stage in tact and smiling! 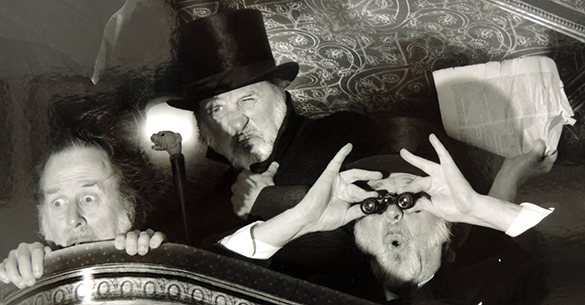 These three Lagardes show their fright, cynicism and astonishment.

This is a must-see exhibition. So get on the number 12 tram. Get off at “Peillonnex.” Take the family. Take your friends. You will never see anything like it!