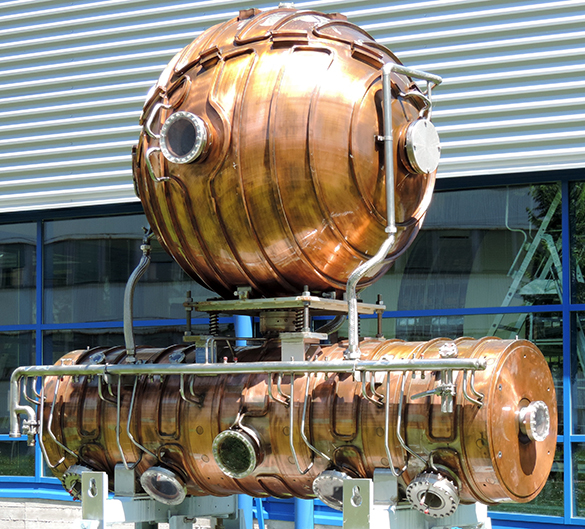 Talking Beautiful Stuff has written about how an object’s beauty may be derived directly from its function. “That’s a really beautiful car!” “What a fabulous knife!” In other words, one thing we take into account when considering the aesthetic appeal of a particular output of the human creative spirit is what the object in question does. Yesterday, I came across this stunning construction on display in a theme park. I just stopped and stared in fascination. I had no idea what it was but I found it intriguing, intimidating and, yes, beautiful. Could it be – and I can hardly bring myself to say the word – “art”?

While you consider these options, take a look at the gorgeous, burnished and exquisitely crafted copper exterior. It hasn’t dulled with exposure to the wind and rain.

The answer: this is one of the original particle accelerators built at CERN in 1983. It and 127 others like it (limited edition!) were placed around the famous 27km circular tunnel under the French-Swiss border. The acceleration around the tunnel of both electrons and positrons up to the speed of light was achieved by making them “surf” on electromagnetic waves of 352 MHz. A physicist friend tells me with great enthusiasm that the cylindrical lower part of each accelerator generated the waves whilst the spherical upper part served as a heat-reducing microwave energy store. I nod politely. 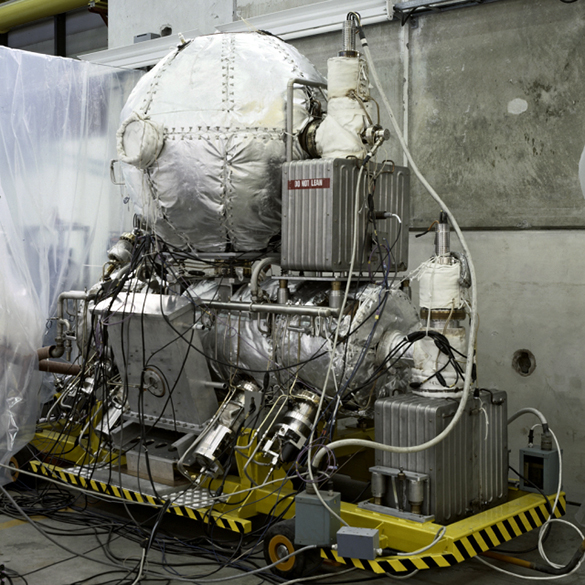 Here it is! With all the bells and whistles all wired up and ready for work!

Isn’t this fabulous? The designers cannot have given thought to the aesthetic appeal of a particle accelerator. This must be design for function only. This is the technical stuff of pure science. This is one hound in the hunt for Higg’s Boson. This is the sort of thing commemorated by the work of Gayle Hermick. But an aesthetic appeal it definitely does have even though I – like most others – have little comprehension of its function and will never see it actually working. However, it stopped me in my tracks and when I told my physicist friend that I wanted to photograph one of the objects  in CERN’s Léon Van Hove Square, he immediately knew which one it would be. 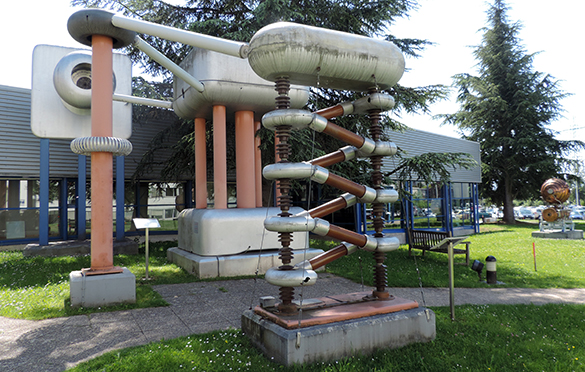 Another object on display in the Square and only 30 metres from the accelerator is an electrical staircase that multiplies the voltage of a transformer. Invented in 1932 in Cambridge (UK), this was used to generate the required 500,000 volts for particle acceleration. It’s looks really whacky and has the sci-fi look but, somehow, it just isn’t …. well…. beautiful.

Does my lifetime exposure to wondrous contemporary sculptures, old sci-fi films, steampunk and the world of Heath Robinson ultimately influence whether I perceive an object such as the particle accelerator as beautiful? Am I influenced because the object is part of the glamour of this cutting edge of science? Why is it easily imaginable that this really is a work by a major contemporary sculptor? If it was put up for sale and CERN asked the price of $1million, does this make it “art”?