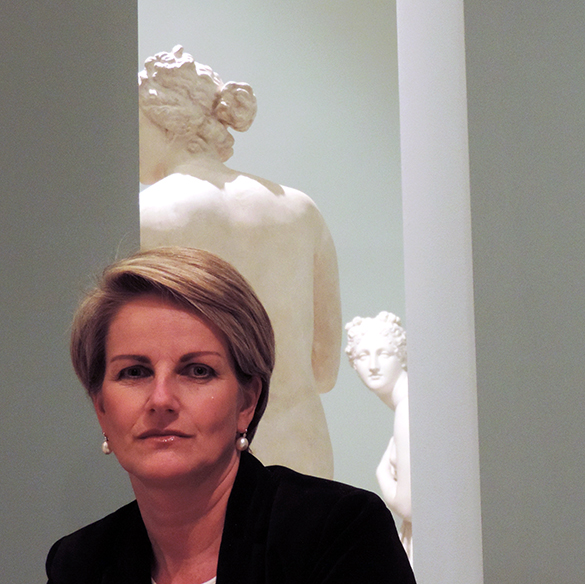 I meet Philippa Kundig at Geneva’s Museum of Art and History. She is the designer of the current exhibition featuring one of this town’s most famous painters: the eighteenth-century neo-classicist, Jean-Pierre Saint-Ours (1752-1809.) And what a monumental, beautiful exhibition it is! If you like to feast on representation of the classics, the team at MAH serves up Saint-Ours’s full menu of Homer, Olympic games (the original!), Spartans, Cupid and Psyche along with dozens of his meticulous portraits.

Such an important exhibition occupies Philippa and the two curators, Anne de Herdt and Lurence Madeline for more than six months. The works have to be sourced, borrowed and transported. Historical research, deciding on sub-themes, writing the panels and brochures, designing the display, building partitions, printing the materials, lighting the space and finally hanging the pictures are all requisite steps towards what confronts me today. 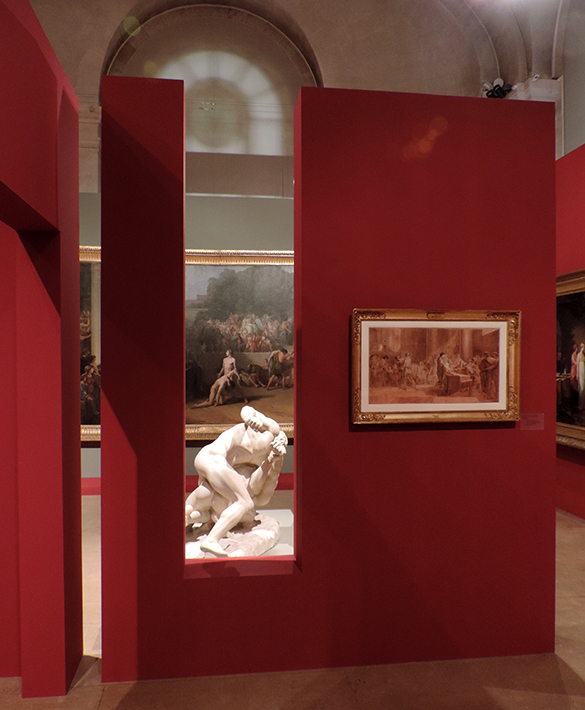 The resulting presentation of the works is stunning. Here, by incorporating a vertical break in one of the rich, plum-coloured partitions, Philippa draws the visitor’s eye into the next space, across a rare Saint-Ours sculpture of two naked men wrestling and then on to an Olympian scene where a victorious wrestler is supporting his vanquished foe before the tribune. 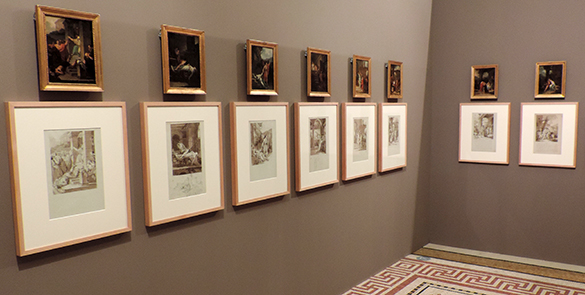 The life and work of Saint-Ours is squarely placed in the Enlightenment. He was profoundly influenced by Geneva’s foremost philosopher of the day, Jean Jacques Rousseau. The painter’s father is said to have possessed a collection of Rousseau’s publications. In one side-room, Philippa shows me a unique, academic and complete body of work. It comprises small oil paintings of scenes from Rousseau’s “The Levite of Ephraim” paired with corresponding ink sketches. Each pair merits minute examination. Tempus fugit! 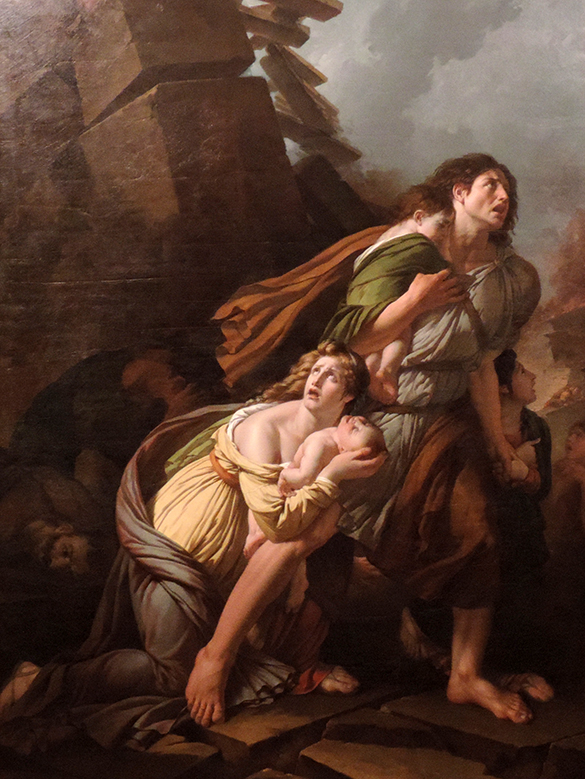 The signature painting of the exhibition is a large-scale version of “The Earthquake.” (Saint-Ours painted four smaller versions.) The motivation for this imposing work came with news of a massive earthquake in Messina, Italy in 1783. A family flees the destruction of their home. They look to the heavens as if expecting to find a reason for this punishment. The woman with her terribly vulnerable – possibly dead – baby are centre-stage. Powerful stuff!

Indeed, these were turbulent times. France was in political upheaval and Geneva had its own revolution in 1792. Saint-Ours maintained a fascination for people caught up in cataclysmic and violent events as evidenced by his sketch-book from around that time. My mind automatically makes a link to the paintings of Tahar M’Guedmini depicting the moment when catastrophe hits…… “when time faints.” 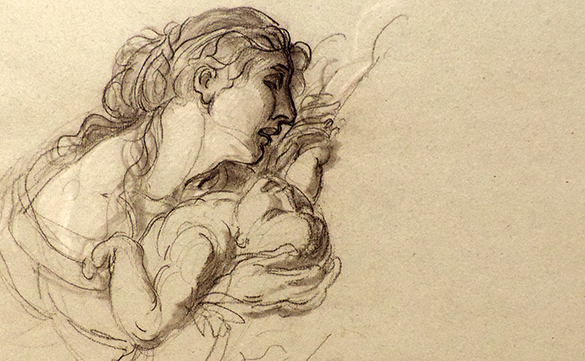 Needless to say, some of Saint-Ours’s exquisite sketches on this theme are positioned near the final work. This part of the exhibition seems so compelling. Is this because it resonates with current events? I guess that if Saint-Ours was painting today, this is how he would portray heart-rending scenes from the current migrant crisis in Europe. Were subliminal influences from daily news playing on the minds of the curators when conceiving this show and deciding on the signature work?

Saint-Ours trained at the Royal Academy of Painting and Sculpture in Paris. For all the splendour of this exhibition, let’s not lose sight of the fact that he was a true master of his chosen medium. I find myself riveted by the sobre concentration on these men’s faces. And this painting was just a study for a bigger, harrowing canvas of the Spartan elders choosing which children would live to be good citizens and which would be left to die.

So…. Bravo MAH! And…. Brava, Philippa!  Many thanks for the private tour of your work-place. I take my leave and enjoy a breath of fresh air. Right in front of MAH, welcoming me back to the crisp October daylight, is my favourite public sculpture in Geneva – Henry Moore’s “Reclining Figure: Arch Leg.” I run my hand over the super-smooth bronze and can’t help wondering how a MAH exhibition designer would display Moore’s work in 200 years. 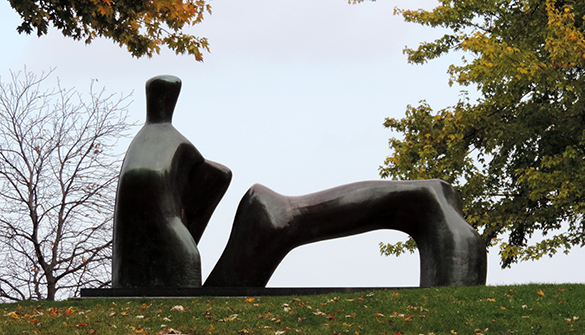 There’s a buzz going on at Geneva’s Place des Nations. I go and snap some photos of Davide Dormino‘s powerful bronze installation entitled “Anything to Say?” It’s only here for a few days. Do you recognise these three beautifully sculpted figures with their calm and determined faces?  For sure, you’ll know their names! They are the three most widely known whistle-blowers of all time: Edward Snowden, Julian Assange and Chelsea (formerly Bradley) Manning. 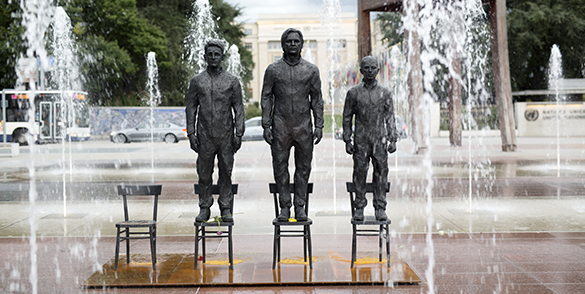 They stand on chairs facing their fate. They wear impersonal one-piece suits. Does this mean they are in prison? Maybe you think all three should be in prison? (Manning already is.) Maybe they are modern-day knights in shining armour come to save us all?

Dormino says the installation “is a monument to the courage of three people who said no to the establishment of comprehensive monitoring and lies, and have chosen to tell the truth.” His work is placed in front of “Broken Chair.” An empty chair on the right of the whistle-blowers transmits a challenge: “Come and stand up here with us! Do you have anything to say?” I’m reminded of the scene in “Dead Poet’s Society” when the pupils, by standing on their desks, show solidarity with their unorthodox teacher whose mantra is “make your lives extraordinary.” I really want to stand on that chair and shout what I think. But then…. Am I brave enough?

This is a guest post by Alexandra Karoun Eurdolian. 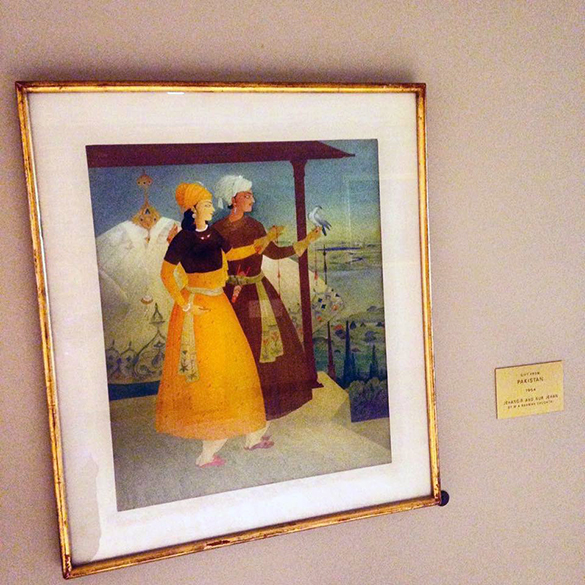 This brought a smile to my afternoon. Took a coffee break in the East Lounge where I was struck by a beautiful watercolor that I had not seen before. The plaque next to the painting indicated that it was a gift from Pakistan (1954), and was painted by an artist who shared the same last name as my friend Alia. A quick message to her and I learned that they are indeed related, her grandmother’s cousin. What are the chances? She shared a few family memories about his life.

According to Abdul Rahman Chughtai’s wiki page, he was “the first significant modern Muslim artist from South Asia.” I was happy to discover his work today. Love the serendipitous, randomness of life sometimes.