I have the privilege of playing a round of golf where the New Zealand Open is played; at the exclusive Hills Golf Course near Queenstown in New Zealand’s South Island. It is not going to be an ordinary day. This stupendous course doubles as a sculpture park of dizzying imagination. The whole is inspired by Sir Michael Hill: jeweller, golfer and believer that the seeing-touching physicality of big metallic art can change society.

The dominant work, next to the 18th fairway and visible from the discrete clubhouse, is a sculpture like no other. A massive oriental warrior wielding a two-handed sword fends off 110 howling-hungry wolves. This is Liu Ruowangs “Wolves are Coming.” (We get up close and personal with the wolves coming down the 18th fairway.)

On every hole, there is a heart-stopping distraction. Golf takes second place. 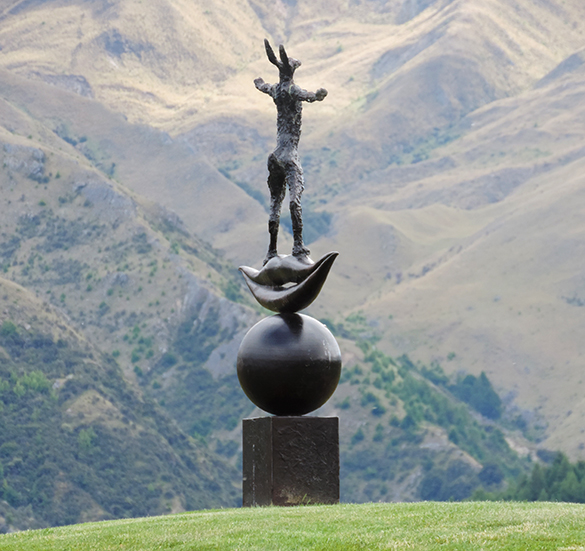 Near the second fairway, a prominent and intriguing but rather absurd rabbitoid figure stands atop a pair of smiling lips atop a sphere atop a cube. I wander around it amused and confused. Only later do I understand that this is a reference to the smiling farmers of the area who, by introducing the calici virus to the rabbit population, believed their vermin woes were over. The rabbits – thanks to their resilient immune systems – have since come back with a vengeance… and have the last smile!

The course-cum-sculpture park is a dream. I love it. The challenging sixth hole has a water hazard in front of the green. Giant shiny dragonflies scoot over the surface. Their bodies are made of those big ceramic insulator things from electricity pylons. Large trout swim by. 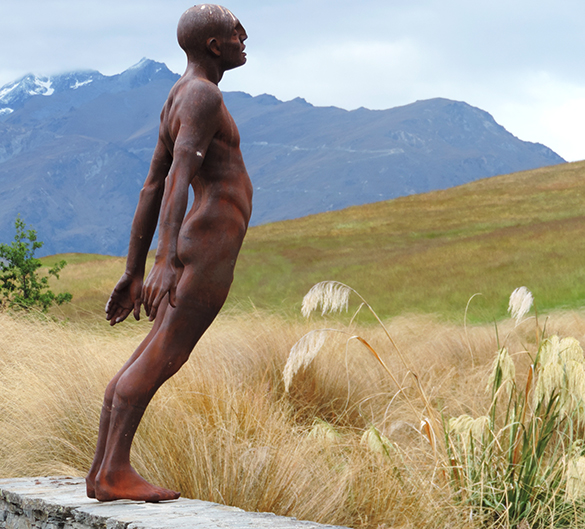 On the tenth hole, I walk over a stone bridge. On the parapet a naked iron man leans into a strong wind. He lifts his face up welcoming the powerful fresh gusts. He exudes peace of mind in solitude. I look closely at his hands and the strained muscles of his legs and abdomen. The anatomist in me sings. 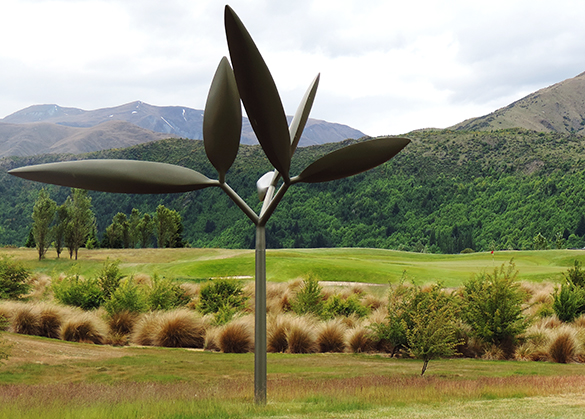 Set against the rugged South Island lanscape, this smooth seedling-like giant tree-flower oversees the 15th fairway. It is totally mesmerizing. The “trunk” and the three individual “branches” all rotate silently around their axes. Everything is perfectly balanced. The mechanics of this classy kinetic work are invisible. It generates a calm mindset for a shot to the large green. 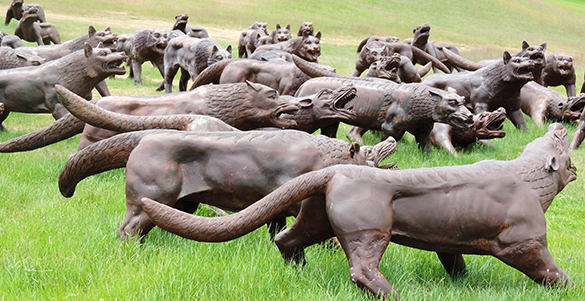 Detail of “Wolves are Coming”

My drive on the eighteenth heads right. I encounter the wolves. They really want to sink their teeth into that warrior! They leave me a little breathless. It is impossible not to feel a primal fear. What would it be like to be set upon by a pack of these predators? At a more cerebral level, I try – but fail – to imagine the work involved in Liu’s masterpiece. 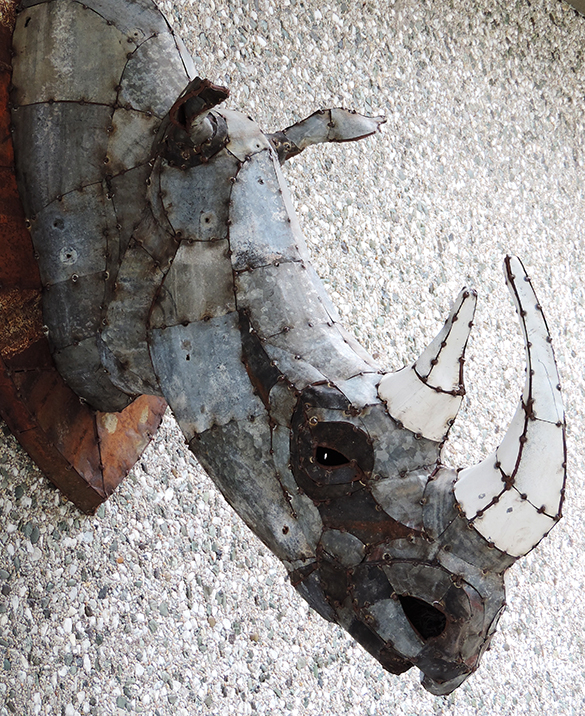 Artist and year as yet unknown, Rhino head in riveted iron

After scrambling a rather undignified bogey on the eighteenth hole (I blame the wolves,) the  club house beckons. At the steps, I am captivated by a false rhinoceros head trophy made, surprisingly and expertly, from bits of galvanised iron riveted together. But it is just so rhino! I adore it. I suspect its presence is a little kiwi dig at the colonial nature of the traditional old British golf clubs? There is no information about who made it or when.

A day at The Hills is quite simply a wonderful experience. I mentally doff my hat to the man behind it all.

1 thought on “The Hills Sculpture Park… and Golf Course, NZ”