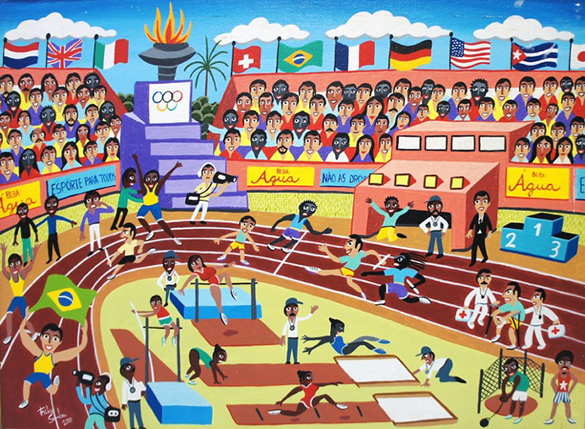 I just love this picture! Fabio Sombra painted it with the idea of the Olympic Games in Rio on a far horizon. At first pass, you might be forgiven for thinking it is done by a talented child. At second pass, you would notice the graded sky, the perfect composition, the balance of colour and the convincing anatomical pose of each athlete. On further consideration, you would take in the multiple ingenious details from the cameraman at the foot of the Olympic steps (who, confused by the abundance of scenes, is pointing his camera at one thing whilst looking at another) to the two little Red Cross guys helping an injured and grimacing athlete off the track. Of course, Brazil wins!

This is no childish work but there is an innocent charm about Sombra’s painting. It is naïve! It makes me happy. It has a James Rizzi appeal. It features on the invitation to the current exhibition “Rio Naïf et les Jeux Olympiques” at Espace L. 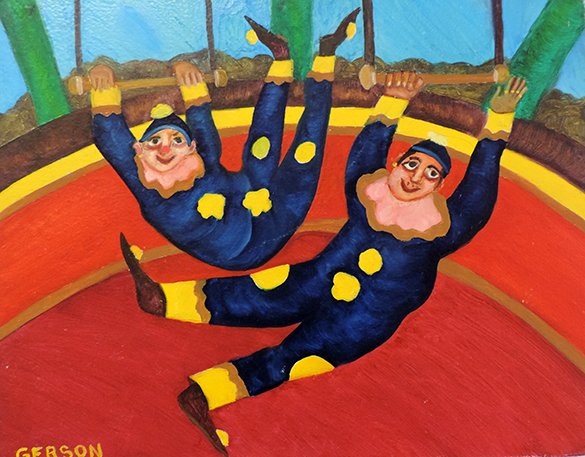 I call in at Espace L. Its founder, Laeticia Amas, believes that naïve Brazilian paintings have not been shown in Geneva before. I find the whole narrative fascinating and can’t help smiling and swinging along with Gerson’s two happy-cool-clown-trapeze artists.

As an Olympic celebration, the exhibition is set to travel this year to other Swiss destinations with close collaboration between Espace L and the Museu Internacional de Arte Naïf do Brasil (MIAN) in Rio, the Basel-based foundation Brasilea and the Consulate General of Brazil in Geneva. 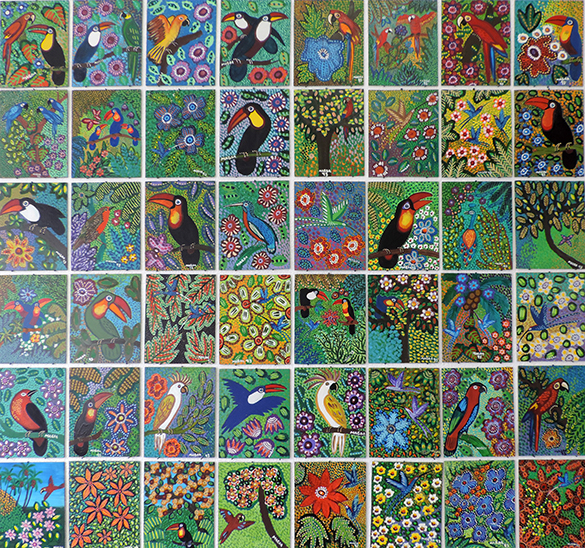 According to Jacqueline A Finkelstein, conservator of MIAN, the term “naïve” was originally applied to the work of Henri Rousseau (1844-1910) who started painting his signature jungle scenes in his forties and famously said he had “no teacher other than nature.” This glorious montage of small paintings by Magda Mittakis shows just how enduring Rousseau’s influence is. 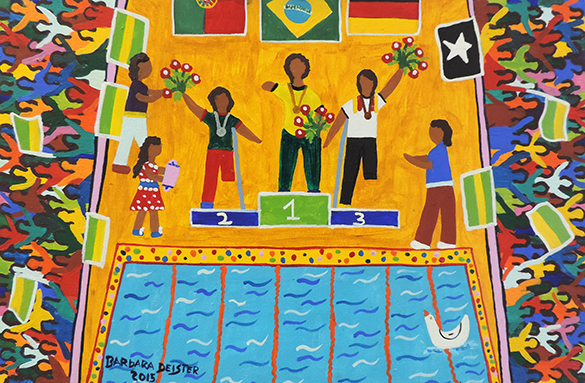 The exhibition is also dedicated to the paralympics. Barbara Deister’s naïve gem shows amputees on the medal podium for a swimming event, an ecstatic crowd and – inexplicably and wonderfully (or maybe just naïvely!) – a white duck in the pool! And of course, Brazil wins! It’s fabulous!

Bravo, Espace L … and good luck with this ambitious project!

The exhibition runs until 5 March.