Those guys from Talking Beautiful Stuff found me an invitation to the grand opening of Art Genève 2016. “Go and check it out. It was great last year. Write a few lines for us. Just say what you like….. and why you like it!!” For a girl from the country who was “good at art” at school, this was an opportunity not to be missed. So I squeezed into something that was once sleek, piled my hair up, applied scary lipstick and, on worringly high heels, teetered off to Palexpo on the number 5 bus. 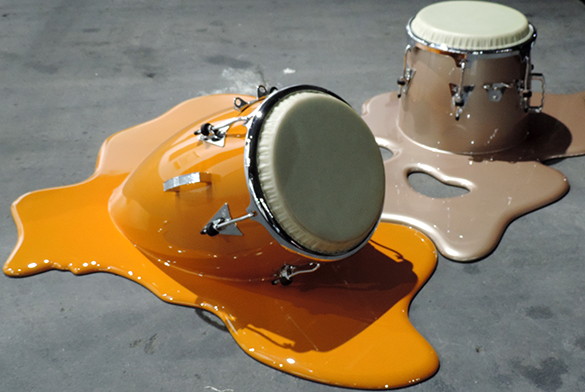 The first thing that caught my eye was a pair of tom-toms melting on the floor. Brilliant! It made me laugh. I expected some poor percussionist to come running in realising that he had left his source of income on a hot tin roof. But how do you think up something like that? Well, Los Carpinteros are Brazilians!

The second thing that hit me was the people. Thousands of people! And not just ordinary people! This was moneyed Geneva out in force. More silicon and silken mouchoirs than you could shake your Jimmy Choos at! A tidal wave of little black dresses on long tanned legs! Somehow, Geertsen’s “Mantelpiece” caught the mood. It smacks of something domestic, seemingly superfluous and discarded but nevertheless oozing a luxury beyond any homeware that I’ve seen. 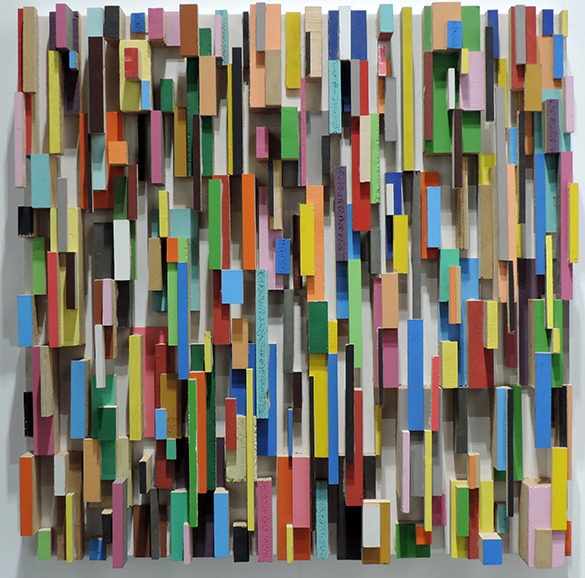 I adore this “painting” made of coloured wood blocks by Beat Zoderer. I wanted to run my nails on it. Visually, it’s surprisingly homogenous; like an overblown pixellated photograph that’s been rained on. Chunky! Soothing! Clever! I was beginning to enjoy “contemporary art.” 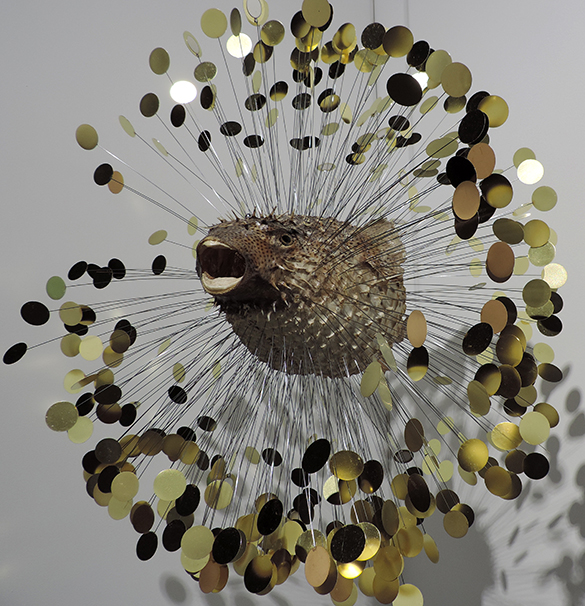 A nice man with a spotted tie spotted me spilling champagne in astonishment when I spotted a dried, poisonous, spikey puffer fish pierced with piano wires each ending with a brass disc. Mesmerising! More so when said nice man invited me to lean in close to the suspended beast. Out of its mouth (the fish’s mouth, that is) came calming tinkly music!!! What a whacky clash of concepts all ending up with something that I found more than intriguing and strangely beautiful. 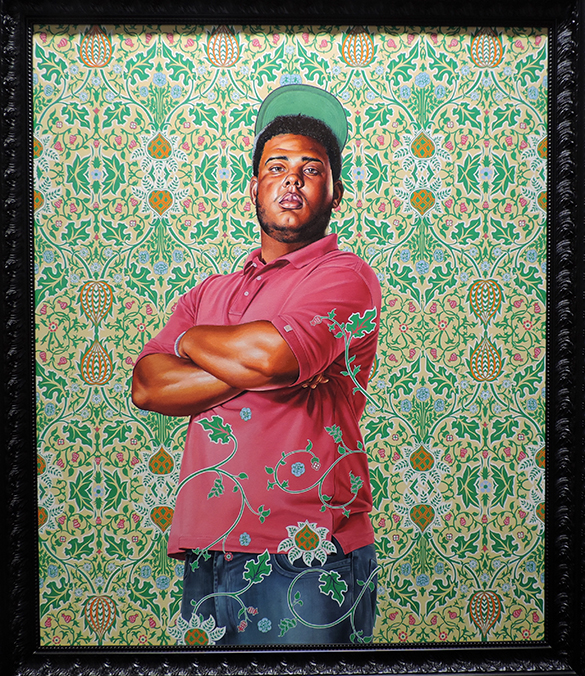 I guess my tastes are more or less conventional which is why I admire the realism of Wiley’s’ “Portrait of Jose Alberto de la Cruz Diaz.” The portrait itself is faultless and honest but what frys my taters is how Wiley has incorporated the subject into the lushy verdure of the wall paper design that should, but doesn’t really, serve as background. Uber cool!

Art Genève is huge and rather intimidating at the point of entry. What I expected was stuff that claimed to be contemporary with little aesthetic appeal; you know, soiled sheets pinned to the wall, half-burnt photos of children, broken glass in old boots etc. What I found was imagination, technical accomplishment and aesthetic appeal by the bucket. Like the clientele, Art Genève 2016 is very classy. I would even take my mum along. And I think she would enjoy it!