I wander into one of my favourite galleries in Geneva: the M.A.D. Gallery. It is a cool-chic space dedicated to wonderful mechanical things. I just sort of assume that this kind of beautiful stuff would be the exclusive domain of those born with a Y chromosome. Aren’t mechanics a boy thing? After all, we grew up with Meccano, Airfix and Lego and then graduated to tinkering with motorbikes that never started! 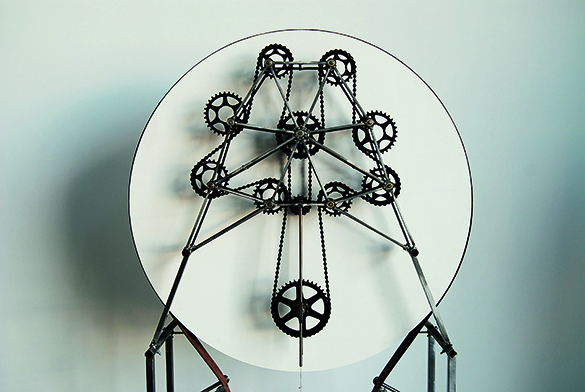 I am greeted warmly by Juliette Duru, the gallery‘s communications manager . “What’s new?” I ask. She introduces me to “Lift,” the work of Jennifer Townley from the Netherlands. Ah! A feminine touch in this exotic man-shed!

I stand before a silently moving arrangement of cogs and chains. The principal chain slowly draws ever-changing amoeboid forms on a round white background. All is beautifully proportioned. There is something immensely satisfying about it. It gives the impression that whatever this machine is designed to do, it is doing it calmly and efficiently. It is mesmerising precisely because there is an expectation of function but in fact, beyond the aesthetic, it has no mechanical function at all. I love it! No surprises that Townley’s major influence is the immediately recognisable and “impossible” graphic designs of compatriot, M. C. Escher. 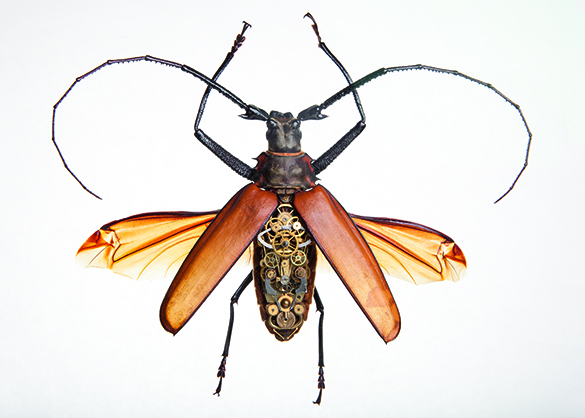 Juliette explains that this year’s collection includes another feminine touch. I am shown immaculately crafted glass display cases each containing a specimen of a huge insect the likes of which I have only seen in Africa or Australia. These are Gaby Wormann’s “Mechanical Creatures.” Stunning! She has delicately inserted hundreds of little cogs, springs and levers from watches into the exoskeletons of real beasts. I gasp at the originality, craftsmanship and attention to detail. Her pieces set up a kind of “What the ….?” moment. You could almost believe that the innards of these oversized bugs really were the stuff of a great horologist. I know that the next time I encounter some big beetle up close and in a quiet place I will creep forward and listen carefully just to make sure it is not ticking.

Wormann says she “deals with the themes of individual ethics and humanity’s uninhibited intervention in complex biological systems.” She doesn’t say “The viewer is invited to inspect a mechanical creature minutely and allow her- or himself to be filled with wonder!” For that is what one does instinctively; one doesn’t need an invitation.

When it comes to Mechanical Art Devices, I clearly have the boy thing wrong.