The sun is rising. Jet-lag numbuzzes my head. I follow signs to the taxi rank at Melbourne’s Tullamarine airport. Ahmed is just a bit too chatty as he drives. He left Pakistan ten years ago. He loves Australia. “I got rights here, mate, you know!” I reflect that had he arrived here over a hundred years ago, he may not have said the same. When it comes to racial discrimination, this country has come a long way. (May be further than Switzerland!!) I am just in time for breakfast. 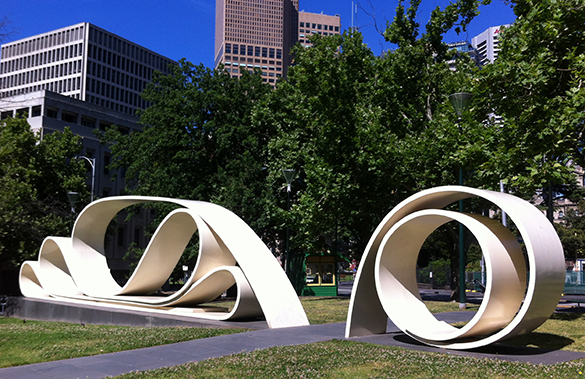 Eggs Benedict force a stroll for a block or two. I squint gritty-eyed into a dazzling blue sky. Rush hour traffic and trams rush and rattle by. On a quieter patch of green behind the imposing Victoria State Houses of Parliament I find a huge creamy-white scroll-like metal structure unfurling itself. It speaks to time and paper and lots of both.

“Great Petition” by Susan Hewitt and Penelope Lee is urban sculpture at its best. It is at once arresting and intriguing. I love its setting and its narrative of political challenge. I tap it gently and think of the technical challenge of its construction. 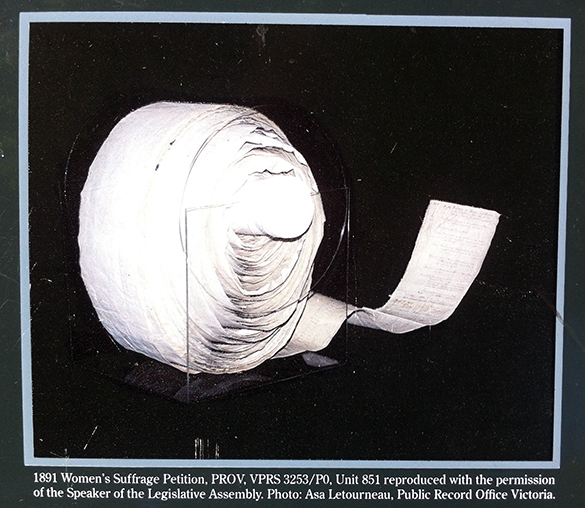 The Monster Petition – as it was then known – is 260 metres long and so heavy it had to be man(!)handled into the Victorian Parliament for its deposition in 1891. The Women’s Christian Temperance Union and the Victorian Women’s Suffrage Society amassed 30,000 signatures as evidence of the widespread support for equal voting rights for women. After several parliamentary setbacks, the Adult Suffrage Act was eventually passed in 1908. However, the State of Victoria denied aboriginal women their political rights until 1962.

Hewitt and Lee consulted widely in the design stage of their work. One emphatic request was made by a prominent ex-Parliamentarian: “Make it big so the blokes can see it!” When it comes to discrimination against women, this country has come a long way.